Sometimes I avoid controversial movies until the brouhaha has died down, dried up and blown away like a tumbleweed in an old western.

I like to watch those movies with a fresh eye, but with Noah, it turns out the fuss last Spring was actually much more entertaining than the film.

I'm not sure how it was pitched to the money men, but it struck me as Close Encounters of the Third Kind meets Transformers meets Apocalypto meets The Lord of the Ring meets Braveheart. And man, wouldn't it have been refreshing to see a flash of butt or smears of blue face paint or a few tartans! Anything to brighten the screen.... 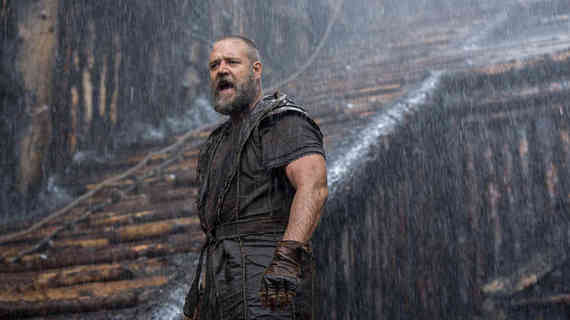 Noah is all mud and no magic. Well, barely. There's a lovely touch where the discarded skin of the Garden of Eden's snake becomes an object passed down from one generation to the next and is used in a ritual of manhood, wrapped around one's arm almost like the way Jews centuries later would use phylacteries (but for a different purpose). It even glows. Once.

That aside, the grimness is so overwhelming it's pretty clear The Creator is drowning everyone because they have no imagination. And no fashion sense. Or maybe he was worried about their Arms Race, because one tribe seems to have invented an early form of the bazooka.

Rightwingers were incensed that God was supposedly never mentioned in this movie, but they also mocked Noah's use of the term "The Creator." To me, that was one of the few graceful touches in a sodden script. And who else would this Creator be if not God? One of the Koch brothers? Ayn Rand?

The movie's first, unpoetic line is "In the beginning there was nothing."

Ditto for the middle and the end.

Lev Raphael's most recent book is a novel of suspense about stalking, gun violence and police militarization: Assault With a Deadly Lie. There aren't any snakes in it, and there isn't any mud or rain, either.