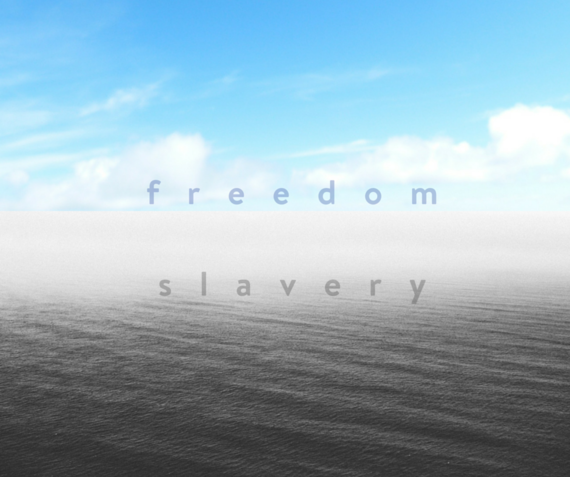 "Had not the holy One liberated our people from Egypt, then we, our children and our children's children would still be enslaved to Pharaoh in Egypt." -Passage from the Haggadah, read on the first night of Passover.

Later this week, Jews around the world will celebrate Passover, a holiday that commemorates our people triumphantly casting aside the bonds of slavery in Egypt, almost three millennia ago. Passover is a time of great joy because the exodus from Egypt marks our freedom from slavery and the birth of the Jewish nation. Because the Jews in Egypt were so entrenched in their roles as slaves, they could not have been redeemed through the actions of Moses alone. They needed G-d Himself to extricate them from Pharaoh's physical and psychological stranglehold and deliver them to their new status as free people in every sense of the word.

A slave only concerns himself with his or her own survival: He or she does not have the ability to extend himself to thoughts of others while his own existence is threatened. That is one way masters strip slaves of their humanity. In Primo Levi's work "Is this a man?" that was recently released in a new modified translation, he describes the loss of the feeling of being human that was associated with a Nazi work camp. And so it was only when the Jews became free people as Levi did that they regained their human consciousness and were able to reach beyond themselves to participate in commandments and activities involving their extended families, neighbors and the larger community.

Slavery In our Own Age

As we prepare for the upcoming festivities, unfortunately, this annual celebration is tempered by the knowledge that, incredibly, there are still those who do not enjoy the freedom that we and the rest of the civilized world take for granted each and every day. According to the National Underground Railroad Freedom Center, "There are an estimated 20.9 million people trapped in some form of slavery today." The Center lists six forms of modern-day slavery: domestic servitude; sex trafficking; forced labor; bonded labor; child labor; and forced labor.

Some of the oppressors are household names, such as ISIS and Boko Haram; others operate under the shadows, just out of our own sightlines. A recent report detailed how members of ISIS force birth control pills upon their rape victims so as not to violate Islamic law. Schoolgirls kidnapped by Boko Haram fighters who refuse to marry the men are forced to serve the women who concede. In India, an estimated ten million bonded laborers--victims forced to pay off debts by working, but for such low wages that, realistically, they will never be able to and eventually will pass the debt and the labor on to their children--help increase the profit margins for the countries' global industries.

Lest we believe that modern-day slavery is rampant only in faraway lands, such as the tribal regions of Afghanistan or Nigerian forests, the reality is far more troubling. Last year a report by the Urban Institute and Northeastern University found forced labor is, in actuality, rampant in the United States. In fact, five Mexican men were rescued after they were forced to work 16 hours a day for meager pay, not simply in the open, but at the Great New York State Fair, one of the most prominent agricultural festivals in the country. Not only is slavery a global problem, it is hyper-local.

Those who enjoy freedom must exercise their social conscience and human ability to empathize with the plight of others and advocate for those who cannot yet see beyond their own survival.

For Jews and gentiles alike, Passover, which commemorates the most famous liberation in history, is the most appropriate of times for us all to open our eyes to the atrocities taking place beyond and between our own borders. Activists in the United States address many social issues including animal rights, sexual harassment, food additives and many other causes. But, it seems that slavery is often overlooked, even though its dehumanizing effect is devastating -- almost a negation of humanity. We cannot always wait for an act of God to solve slavery; this time, it is up to us.