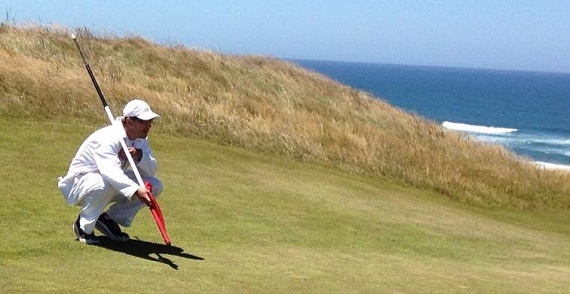 A version of this article was previously published at The Good Men Project.

In June 2013, I quit my job to caddie at Bandon Dunes Golf Resort. I did this for myriad reasons -- for the golf, for the lingo, for Noonan -- but mostly I did it in the spirit of Andy Dufresne: Get busy livin', or get busy dyin'.

I was 35 and stuck, my life progressing too slowly as life passed me by too quickly. My hope was that this outside-the-box experience could work as a sort of accelerator for growth and accomplishment.

Somehow, it did. My time on Oregon's southwestern coast allowed me to take a risk, one that exposed my deepest anxieties, and come out the other side upright. I got to do what I loved where I loved, and I got to do it on my own terms.

It's been two years since my final loop, and in that time, I've gotten married, started a new job and become a homeowner, none of which would've been possible without my experiences as a caddie. Though my coveralls have been relegated to Halloween costume status, the lessons I learned remain, carrying me toward a state of total consciousness...

My caddying career was littered with mistakes. Initially, my instinct was to manage these mistakes like the stand-up person my parents raised: with ignorance. I'd silently walk alongside my player, dodging eye contact, hoping the awkwardness would blow out over the Pacific. If I didn't acknowledge the screw-up, maybe it didn't exist.

For caddies, credibility is everything. Someone is paying you to tell them what to do and where to go, so confessing to bad directions feels like a strike against your most valuable asset.

But in a way, admitting to a mistake doesn't diminish credibility, it bolsters it. After all, how does one build trust? By saying as many true statements as possible. My poor advice led to my player's poor result. Owning that wasn't just the right thing to do, it proved that I spoke (what I believed to be) the truth.

Of course, "My bads" work on a pitch count. Throw too many, and your advice becomes as welcome as an indoor bathtub in a Cialis commercial.

I'm more like George Costanza than I care to admit. We both wear glasses. We both lived with our parents at inappropriate ages.

And we've both been fired.

My canning happened early, when I'd been looping a short time, so my knowledge base was incomplete. That was the guest's concern. I understood the logic, but I was surprised. This was a novice player, and though I had plenty to learn, I was not the source of his struggles. I take responsibility for any god-awful advice, but because he couldn't execute the majority of suggested shots, there's no telling how often I was right or wrong. When your divot flies farther than your Titleist, who knows if you should've hit 6-iron instead of 7?

And while my course knowledge could be questioned, my customer service could not. I hustled nonstop, wearing an interminable smile while scaling sand dunes in search of banana'd tee balls.

I'd heard other caddies talk about getting fired, but that was them, this was me. I was decimated. That is, until I calmed down enough to wonder:

What would he say? I believed my performance exceeded "fireable"; what was his story?

My guess? He'd agree that I was nice enough and worked hard enough, but he'd point out I made my share of mistakes. He'd probably concede his game was limited, but he'd also assert that a veteran looper might maximize it. Ultimately, this was his experience, and I wasn't what he wanted in a caddie.

And I wouldn't argue with any of that.

If a player doesn't agree with your recommendation, there's only one thing to say: "Hit what you see." Though these instances dented my ego, I couldn't help admiring the person for committing to their convictions.

In my previous jobs, decision-making was pre-defined. The operations were established enough that they functioned almost in spite of themselves. And me.

Not so with caddying. From one shot to the next, you're forced to make a call and live with it. There's no more exposed state than waiting to see if a putt you said breaks 6 inches left, breaks 6 inches left. Right or wrong is presented in make or miss.

And as I examine my best decisions, on the golf course or otherwise, they're ones that weren't dictated by potential consequences. I simply committed and trusted; no obsessing, no second-guessing. It's how I found my way to Bandon, it's how I made it to the altar, and it's how I landed my new job -- from which I've yet to be fired.

My greatest insecurity as a writer? Speed. Jumbled and incoherent, the words swirl in my mind's eye, like a snowstorm, convincing me I'll never figure out what to say and how to say it.

At Bandon, I expected an acclimation process, I just didn't expect the hardest part of it to be the caddying itself. Links golf is a different animal, though. Whereas American-style courses are straightforward -- here's the fairway, there's the green -- links layouts are anything but. Everything looks the same. Bandon has four courses, which meant four times the confusion.

And the wind. Good lord, the wind. Heavy, blustery, brutal. During a training round, the caddie I was following quizzed me on how far a shot was playing, and I undersold it by 35 yards. That's like bidding $1 in the Showcase Showdown, not to avoid overbidding, but because that's what you believe the Showcase costs.

There was no shortcut in my development, no magic formula. I had to walk the courses enough and breathe the conditions enough to become a legitimate looper.

And eventually I did. Eventually I learned that Pacific's 12th green runs quick, and that hitting driver on Bandon's 16th provides a versatile avenue for approach. What started off as Swahili had come to read like English. Hopefully like this article.