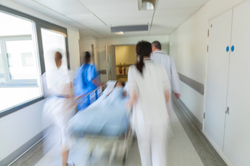 On March 23, 1976, I was stabbed in a knife fight. I've never written about it until now. The fight occurred at the bus stop after school.

To this day, I don't even remember what it was about. I didn't have a knife, but that didn't seem to matter. I was stabbed just the same. Twice. Once through my shoulder and once in the abdomen. I lay down in the street until my sister was able to help me home.

By the time a neighbor drove me to the hospital, I had lost three pints of blood. I had gone into shock upon my arrival, and was immediately intubated and wheeled into surgery. The first person who met my parents when they got to the hospital was a police officer who identified himself as being from homicide. I was 12.

I spent two weeks in intensive care and more than a month at home before I was allowed to go back to school. My biggest fear at the time was that I would have to repeat seventh grade, having missed so much time from school. I would have, had it not been for two people. Together, they taught me two life lessons that run deeper than the scars.

David Kurlander, also 12, was a friend of mine. We hadn't grown up together, nor had we known each other very long. But we spent some afternoons at each other's houses playing Risk and doing whatever else it was that 12-year-old boys did before Minecraft. He wasn't my best friend back then, and I probably wasn't his, but we were close and apparently, that was enough.

Not long after my release from the hospital, David appeared at our door with a stack of homework. He had collected it from each one of my teachers and delivered it on his bike. I remember being a little irritated. The only good thing about being homebound was that I didn't have to go to school. Yet there it was, stacked up and waiting for whenever I could sit up for longer than a minute.

He delivered my homework every day. He didn't often stay to visit. I was usually resting and he had to get home. Gradually, I began doing the work and he picked up completed homework for the return trip. I never asked him to do it, but he did. Every. Single. Day.

I learned the second of my two lessons from one of my teachers, Mr. Sanders. (To this day I don't know his first name.) He was my science teacher and, to tell you the truth, I didn't like him very much. He didn't have much of a sense of humor and he was geeky in a way that I guess all teachers must seem to 12-year-old boys.

A couple weeks in to my recovery, around the time that David was bringing completed homework back with him to school on his return trip, Mr. Sanders started coming to our house. I'd watch out the window as he unloaded has battered case from the back of his car and walk toward my house.

He unpacked the case in the small bathroom at the end of the hall. Out came the flasks and beakers, tongs, and chemicals, and even a Bunsen burner with a small, cylindrical gas tank. Once he set everything up, he and I recreated the science lessons, me in my pajamas and him in his long white lab coat.

David taught me about friendship. Real friendship, not the kind marked only by virtual hugs and likes. There's so much about friendship that's easy. But I learned from David that the litmus test of a true friend is whether a person is there when it's not easy. When you're needed, anything less than interrupting your life is just lip service and a clicked thumbs up.

Mr. Sanders taught me about what it's like to heed a calling. He seemed an unlikely figure to do it. Yet there he was, three times a week, standing there in his worn lab coat, hunched over a beaker, giving his dry explanation of what was to me, a bone dry subject.

Mr. Sanders was a teacher. Years later, I came to understand what that meant. He wasn't a teacher because he couldn't think of anything else to do or because he had washed out of some private sector job. Being a teacher wasn't what he did, it was who he was. There's a difference. I just didn't know it at twelve.

By the time May rolled around, I was able to go back to school full time. I completed 7th grade with my class and moved on to 8th. I was "the kid who got stabbed" and, at times, I relished the notoriety in the stupid way of a 12 year old boy, as if there was some glory in it.

The scars faded over the years. You can barely see them when I'm on the beach, even if you know where to look. But David and Mr. Sanders stayed with me. In direct contrast to the scars, the lessons they taught me started out all but invisible only to become branded on me later in life.

The lessons are permanent. They ground me. And when I need reminding, I think of David Kurlander and Mr. Sanders and I remember, once again and with full intensity, that core values, such as those of friendship and dedication, only mean something if you stick to them when it's inconvenient.