School started a few weeks ago, and we're still trying to get back into the swing of things. I don't know about you, but it's been tough. Are you back in the routine yet?

Our morning routine is pretty standard. The Hubs wakes up early to get the kids ready for the day. At 7:30 a.m., he starts out by yelling -- I mean, gently waking up the kids. Every morning I hear "Adolpha, get down here and get dressed" and "Gomer, get dressed and brush your teeth." Some days there is more yelling than others.

This morning was one of those mornings. Both kids woke up grumpy and sluggish and there was more than the normal drama to deal with. Gomer had lost a shoe and Adolpha was refusing to brush her teeth. I had had it. I was trying to make lunches when I found Adolpha's take home folder on the counter, buried under some junk mail. It was stuffed with papers that she had not shown me. I was so irritated. She doesn't have many jobs, but she is supposed to empty her folder each night and show me what's been sent home so I don't miss anything important. I flung open the folder and started slamming papers on the counter, saying, "Adolpha, you know you're supposed to empty your folder! Why can't you do what you are supposed to?"

"You don't forget to do your jobs at school. Why do you do forget them at home?" I asked, continuing to fling the papers around. Worksheets, field trip notices, and spelling tests went flying.

Before I knew it, Gomer's lip was quivering. I turned on him, "And what's your problem? Why are you crying?"

"Because you're yelling at Adolpha," he said, tears welling up in his eyes. Both kids started to cry.

Really? I thought. I should be the one crying. I am running around trying to do everything for the two of you because you can't get your act together. Who loses a shoe after walking in the front door? Who cries because brushing their teeth is sooooo hard? Who takes 10 minutes to decide if they want a ham and cheese or peanut butter and jelly sandwich in their lunchbox?

"Oh please, Gomer, just stop. I can't even listen to you right now." As I responded to him, I continued to empty Adolpha's folder. "Both of you stop crying and go find Gomer's shoe!" I glanced down at the sheet of paper in my hand and I could see it was a letter from Adolpha's teacher stuck in her folder.

I knew I'd miss something important! I thought angrily. A letter from the teacher! Who knew when she sent that thing home? 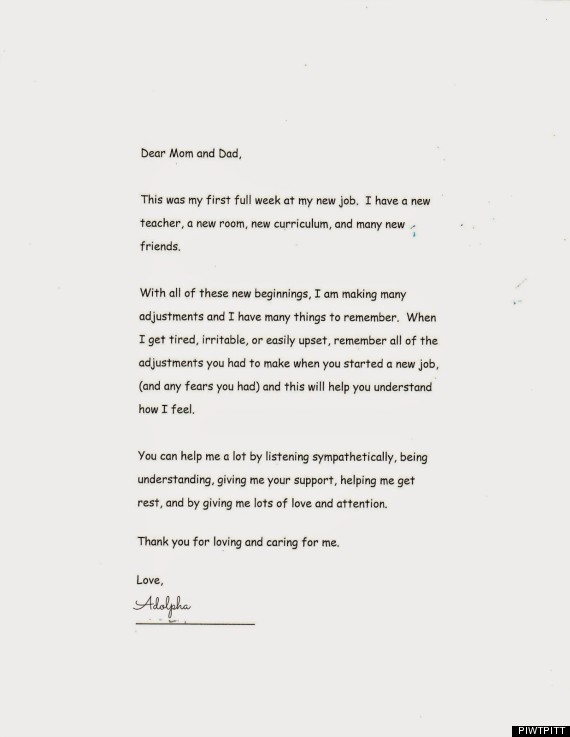 The letter stopped me in my tracks. I read it again. And then one more time.

Crap, I thought. I suck at being a mother.

Normally, I don't have mommy guilt, but that morning I felt like a terrible mother. I was yelling at my kids because they couldn't find a damn shoe. I was slapping together sandwiches because I was pissed that once again the school was selling a disgusting lunch that no one wanted to buy. It was like Mrs. K. knew what our morning was going to be like. How did she know that the letter was exactly what I needed to read right at that moment? I don't know, but I was glad she did.

I was about to call the kids over to apologize to them when the Hubs flew into the kitchen in a rage. He had heard the yelling, the whining and the crying and he was ready to crack skulls (figuratively of course!). "What's the hold up? What's the whining all about now? Are you guys ready to get in the car? Let's go! We're going to be late!" the Hubs yelled.

I grabbed his arm. "Before you say anything else, you need to read this." I handed him the letter from Mrs. K.

I watched his face as he read it. He came to the same realization as me. We were terrible. "What..." he trailed off, looking up from the paper.

The kids had stopped looking for the shoe and were now watching us carefully.

"We're awful," I whispered to the Hubs.

I want to say that we held our kids tight and gave them a huge family hug, but that's not what happened. That letter might have softened my cold, black heart, but I didn't grab a guitar and start singing "Kumbaya" and telling stories about rainbows and unicorns. Instead we both took deep breaths and helped our kids find what they needed to find and went on with our morning. It just wasn't as hectic as it had been.

I wanted to send a note to Mrs. K. and tell her how much I appreciated her letter. I wanted to tell her that I'm not a perfect mom and the Hubs is no super dad. We try our best, but sometimes we need a stiff kick in the ass to put us back on track. I was going to thank her for being that much needed kick in the ass, but I got sidetracked before I could do it, because I'm still trying to find Adolpha's reading log.

*I've altered the signature on the letter to protect my daughter's real name.

This post originally appeared on People I Want to Punch in the Throat.