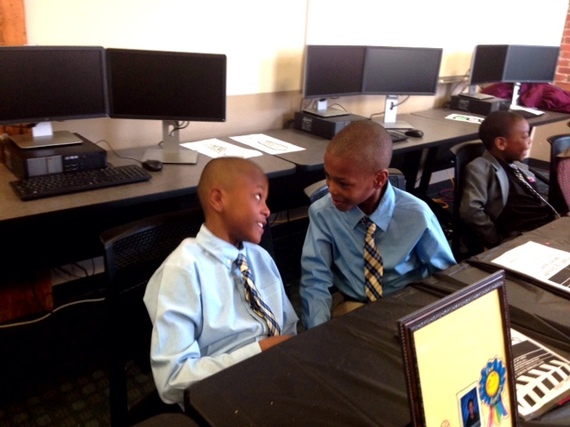 We need to stop teaching our black boys how to survive in a world not designed for them, and instead show them how to design a world that will allow them to thrive as individuals.

I never realized how hard it was to get people to view black men and boys as assets until I asked them to actually do it. In countless conversation I've had with peers about black male achievement--from philanthropy to politics, to the environment and education--the question has always been: "how do we help black boys achieve?" and not: "how do we leverage the value and agency of black men and boys who are already achieving to inspire others and transform the spaces they live, work and play?"

In my opinion, the reason the latter doesn't gets asked as often as it should is because most people believe that black men and boys are problems that need to be solved; a disease that needs to be cured. Decision and media makers pretend the answer is as easy as getting the "thugs" to pull up their pants and not tattoo their faces. Well-intentioned teachers and mentors often express that if black boys wear suits, ties, and carry books instead of bullets, that the probability of being accepted by, and achieving in, the "real world" will increase dramatically.

Parents of black boys--just wanting them to come home in one piece--indoctrinate them religiously with the "do's and don'ts of being black in public." And all the while, during of all these lectures, the black boys who we want to grow into proud black men are slowly but surely feeling humanity slip right out of their finger tips. With a skewed perception of their self-worth, chances are those black boys grow into insecure black men who feel the need to measure their accomplishments and assets to their white-counterparts, ultimately seeking validation outside their race before accepting what makes them unique. What we should be telling black boys, and more importantly, what they deserve to hear is that the "real-world" is messed up and is filled with sick people who will hate them regardless of whether or not they are wearing a hoodie or a Brooks Brothers suit.

They need to hear that the problem is the world and not them; that they exist to improve the world, not succumb to its bullsh*t. Black boys deserve to know that their elders will fight for their right to walk or run down a street of their choosing--regardless of their clothing--without the fear of being intimidated by a police officer who doesn't view them as a human being.

We need to stop teaching our black boys how to survive in a world not designed for them, and instead show them how to design a world that will allow them to thrive as individuals. We need stop preaching respectability politics and tell our black boys what they deserve to hear, which is the sky is not the limit, it's the starting point.

CLICK HERE to pledge to see the good in black men and share their stories so that others may do the same.