On September 12, I got married to the Love of My Life, Kiran. This is the second marriage for both of us, so neither of us felt inclined to throw a big bash. We simply agreed to what we wanted, called the Santa Barbara courthouse to schedule a date approximately one week in advance, then hopped in our car in Los Angeles on the big day and showed up one hour prior to our appointment. We told no one about our plans, and brought only our dog as our witness. 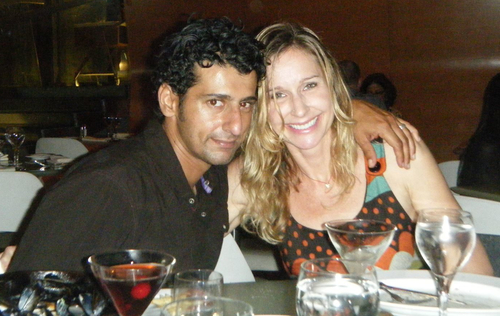 Now I'll admit, I got to have my dream wedding in Hawaii the first time around (thank you, Mom and Dad), so my girlhood Disney-fed bridal fantasies were totally satiated at age 26. I will not argue that elopement is for everyone, nor that it is the best choice in every situation.

On the contrary, public weddings surrounded by family and friends provide a meaningful opportunity to garner the support of your community, and give you a chance to introduce people from different parts of your life to one another for the first, and often only, time. Furthermore, they give everyone an opportunity to celebrate love and commitment.

However, I would like to make an argument for elopement as an attractive option, one that I feel is too often overlooked in modern society. Assaulted as we are on a regular basis by fairytale images of nuptials in Martha Stewart's Wedding magazine and celebrity gossip rags at the checkout counter, it can be easy to get caught up in the bridezilla frenzy.

But it's time to get rid of the old paradigm, which holds elopement as a solution solely for people who are sneaking off to get married either because their families don't approve or because they're already pregnant (in this day and age: who cares?). Elopement can prove the perfect solution for more than just second marriages. Mature couples who want to spend their time and energy on something other than a throwing a wedding will benefit, too.

Here are my top 10 reasons why you might consider eloping.

My girlfriends and I like to joke about "the wedding train." It's as though weddings operate with an engine of their own, regardless of how much fuel you choose to put into them. The moment you step on board, budgets, people's emotions, your time commitments, and everything else associated with the event spirals out of control.

Elopement is one sure-fire way to ensure you don't end up boarding the Wedding Express. You simply choose your destination, then drive your own car at your desired pace, with minimal stress involved.

No sooner have you announced that you're engaged, than your mother, your partner's father, and your ex-best friend from middle school are stepping in with their suggestions of what/when/where and who. First area of contention: the guest list. It doubles. Then triples. Do you really have to invite your second cousin once removed? Your yoga friend who recently connected with you on Facebook? Your dad's former business partner?

Avoid the problem entirely by not having a guest list. You might offend everyone, but at least you don't have to play favorites.

3. You can put the money to a good cause.

The moment they hear the word "wedding," everyone in the service industry--hotel reservationists, photographers, musicians, florists, bands and DJs, designers and printers--begin salivating. Prices double.

Kiran and I spent approximately $300 on our wedding: license; courthouse ceremony provided by a lovely middle-aged woman with a gentle manner; and witness (it turned out that the dog didn't count, from a legal standpoint, so we had to pay for another woman from the courthouse to attend our service). We are now able to donate several thousand dollars to our favorite causes, like Surf for Life, a San Francisco-based non-profit that's building a school for underserved kids in Costa Rica and El Salvador.

4. You don't have to waste time on wedding gift returns.

After my first wedding, I spent a year dealing with gifts that hadn't been on our registry. It's the thought that counts, of course, and I appreciated everyone's generosity. But the black lacquered wall clock in the shape of Thailand that one well-intentioned family friend gave us just wasn't going to fit with our modern loft décor.

I might get in big trouble for saying this, but oh well, it has been over a decade: I took back what I could, collecting store credits that I later used mostly to purchase wedding gifts for other people. The remaining items ended up at Goodwill, or as office holiday party "bad taste gift exchange" offerings.

6. You're free to choose your spot, guilt-free.

When you elope, you can select a special place to get married that means something special to the two of you--without having to worry about how your guests will get there.

My friend Katia was recently boulder climbing in Chaco Canyon in New Mexico, when she came across a couple getting married by a Native American medicine man on the top of a mountain. She couldn't imagine what it would have taken to coordinate getting a whole slew of friends to that wedding, much less Grandma Esther. But what a perfect moment it was for the newlyweds, surrounded by nature, in a spot that surely had deep significance to them.

7. You get to be spontaneous.

Life is more fun when you surprise people from time to time. While you might fear offending some friends and family members--and you probably will piss off a few of them, let's be realistic--most people will support your heartfelt expression of love for your partner. Kiran and I received nothing but warm congratulations after we announced our elopement.

I have a feeling I know why this is the case. Which brings me to my next point...

8. You don't impose on your guests.

Yes, yes, of course: many of us love weddings. We get to eat, drink, toast, and dance the night away in the most festive, joyful atmosphere.

On the other hand, weddings are an imposition on your guests. I remember a period in my late 20s and early 30s when I spent every single one of my vacations and every single dollar of my disposable income on weddings. It became rather grueling. Set your guests free: elope.

Kiran got nervous the morning of our marriage ceremony, which I found endearing. I kept saying, "What are you worried about? That the bride won't show?"

But he explained it well later. "Leading up to my first wedding, I was distracted by the details of the event. Would the band suck? Would it rain? Would people have a good time? When we eloped, I had nothing to focus on but the act I was about to commit. I kept thinking, 'Wow, I'm getting married.' I could appreciate the significance of what I was doing. It means the world to me that I was able to go into our marriage ceremony with such awareness and intention."

Living life well means taking risks. When you get to the point where you know this is the person you want to spend the rest of your life with, you know. Why wait another year to make it official? At least that's how I felt, nearing 40.

What's more, when you elope, you get to be totally authentic. You're not playing by anyone else's rules but your own. You simply follow your passion and your heart to the wedding that feels most "right" for you and your beloved. What's not to love about that?

More:
elopingweddingswhy i elopedsecond marriageHappiness
Newsletter Sign Up
An essential daily guide to achieving the good life
Subscribe to our lifestyle email.
Successfully Subscribed!
Realness delivered to your inbox