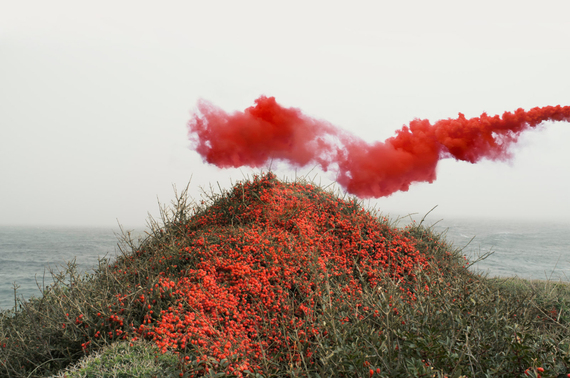 There is no past, no future. There is only experience.

The present is the umbilical cord that connects our consciousness with the physical world. For our consciousness everything that is placed outside the present acquires the properties of a concept, it becomes an idea, distant and abstract, approachable only through a subjective reflection of the mind. Unlike the present, the past and the future lack the intimate connection with our consciousness, since they are both unavailable to our senses. The present can be sensed, it is perceived through our senses and it reflects the nature of our perception. On the contrary, the past and the future can only be thought of, they are perceived through our mind and they can only reflect the schemes of our mind. The chain of time is deceptive. For our mind the present -the only dimension of time available to our senses- is entrapped between two elusive, mental dimensions, the past and the future. The chain of time is heterogeneous, its components are of a different nature, they share different qualities and this is why it is inevitably deceptive. It appears to be one thing while it's two.

Our mind uses the dimensions of space in order to accommodate every information perceived or conceived. Every structural analysis of any thought process can always be more accurately explained through geometric representations that unfold into the dimensions of a proposed space. In contemporary science most theories are in fact introduced as models, through their geometric representations. This theoretical conceptualization, in many cases, is the only way that some empirical entities or mathematical models can be accurately expressed. This is something really indicative of our mind's mechanisms. The conception of space is applied to the realm of our ideas, to the outside reality and to the perception of time as well. The three dimensional physical world expands around us and it is projected as an area that encloses our senses. We find ourselves in the center of this projection because this is the only way that its subjectiveness and relativity can be maintained. Our mind tries to establish a similar space for the perception of time. It creates memories in order conceive the dimension of the past, while it reflects them in the future. This way our consciousness can remain centered in this projection, in accordance with the three dimensional world. The centeredness of the physical space is a condition, but the centeredness of the timeline is a reflection.

For our consciousness a connection with the past is a connection with our mind, which derives from an adaptive desire to connect with an identity. The word itself comes from the Latin word idem, which means same. It was after the Medieval times that it acquired the form identitas, meaning sameness, the state of being the same. Identity is the effort of remaining the same. But really, what else exists besides the projection of our mind, for us to remain the same with? An interpretation of the outside reality through ideas, bound to eventually fade inside the inevitable flow of nature. The desire for an identity is an outcome of the centeredness that our mind utilizes in order to organize the information of the outside world. By applying this centeredness back to ourselves we are falling into a revealing paradox, perceiving our very own presence as part of the outside reality.

Our consciousness lies behind the mechanism of perception, not across them. Space doesn't apply to it and this is why it cannot be centered. Time doesn't apply to it and this is why it has no age. For our consciousness there is only experience, pure, revealing, undetermined. Experience is not an accumulation of memories, but a process of awareness. Memories are flowing, touching our consciousness only for a moment, before they hide themselves into the functions of our mind. Anything else beyond this point is only a mental activity, subjective, temporary and imperfect. Their momentary effect in the consciousness though, it's what experience really is. They generate the awareness inside us, they awaken our spirit, letting it realize itself.

The Neoplatonist writer Sallustius lived in the 4th century. His most notable work is a treatise named On the Gods and the Cosmos, probably written during the reign of the emperor Julian, a close friend of him. In this concise work, we can find the traces of a long tradition that starts with Pythagoreanism, at least eight centuries before him. In the chapter entitled On Mind and Soul, we read the following lines, in which the consciousness is untethered and unlocalized.

Sallustius, On the Gods and the Cosmos (VIII On Mind and Soul, And That Soul is Immortal)

Experience is a process of self-realization. The primary act of everything within the infinite space of our consciousness. It is the constant awareness of the limitless.