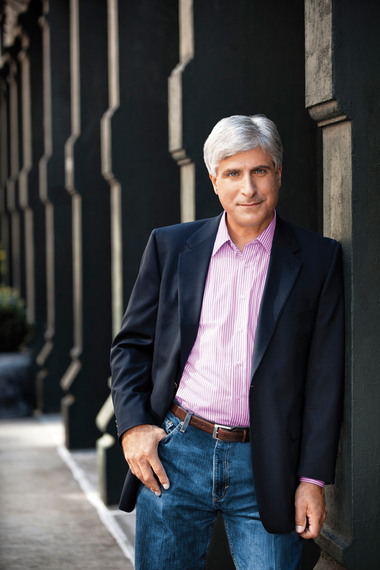 Steve Berry is the international bestselling author of nine Cotton Malone historical thrillers and four stand-alone thriller novels. His books have been translated into forty languages. History -- Steve's passion -- lies at the heart of each one. Over the years, he has received many honors. In 2013, he was the recipient of the Poets & Writers' Barnes and Noble Writers for Writers Award; the International Thriller Writers Silver Bullet Award; and the Spirit of Anne Frank Human Writes Award. He is a founding member of International Thriller Writers; and in addition to writing, is heavily involved in preservation of historic sites. His storytelling continues with the release of his new novel, The Lincoln Myth

What is the Lincoln Myth?
There is so much about Abraham Lincoln that people accept as true. The myth of Lincoln has dominated Lincoln's actual history. During the first twenty years after Lincoln died, he was vilified. He was not regarded as very special. Towards the beginning of the 20th Century, the myth began taking hold. Now, it's firmly in place. Here's an example: every school child in America is taught that Lincoln freed the slaves. When you hear the name Lincoln, your next thought is, "He freed the slaves." That is utterly false. At no time during his presidency did Lincoln free a single slave. The Emancipation Proclamation only freed slaves in the rebel states, over which he had no jurisdiction. The slaves in the states, over whom he did have jurisdiction, were specifically excluded from the Proclamation.

In fact, Lincoln was clearly a secessionist as late as 1848. It would be really interesting to know what changed his mind between 1848 and 1861. He was not what people think he was, but that doesn't diminish his greatness. In fact, to me, it makes him even greater. He had some very tough calls to make. There's a portion of the novel that sums it up. It says, "Lincoln didn't fight the Civil War to save the Union. He fought the war to create it." Lincoln created the concept of fifty indivisible states. That concept never existed until that point. It's not anywhere in the Constitution. Now, it's ingrained in our thinking.

Historically, we've taken reality and twisted it around into myths we want to believe. Yes, ultimately, Lincoln championed the 13th Amendment and moved forward in ending slavery, but he didn't do it the way the myth says. It's always bothered me that we must create myths. Why can't we just deal with the truth? This novel deals with several myths about Abraham Lincoln.

You quote John F. Kennedy regarding myths.
Yes, John F. Kennedy said, "The greatest enemy of truth is often not the lie...but the myth--persistent, persuasive and unrealistic." I came across that quote and used it in the The Lincoln Myth. We have a vision of Lincoln that doesn't comport with reality, but it doesn't diminish his great accomplishments.

In the novel, what role did James Madison play regarding the Constitution?
This novel deals with the question of whether or not a state can leave the Union. Madison was very important to this debate, which to some extent, is still ongoing. Madison created the notes from the federal Constitutional Convention. His notes are the definitive record of what happened there. But, we have no idea if his notes are accurate. Madison didn't publish those notes until fifty-three years after the convention. He left a specific instruction that they were not to be published until after his death and that of every member of the convention. And, he freely admitted he'd altered and modified the notes during those fifty-three years. So, we have no clue as to what really happened at the Constitutional Convention. Madison says they never talked about whether a state could leave the Union. But we only know Madison as the source for that information. So, Madison's involvement plays an important part in the novel.

The Lincoln Myth talks about the Church of the Latter Day Saints and its involvement with the nation's history.
Yes. The Mormon Church plays an integral role in American history. I never realized that until I began doing research for this novel. As best we can determine, Lincoln was the first president to read the Book of Mormon. He checked it out of the Library of Congress in July of 1862. He then made a secret deal with Brigham Young in July of 1863. That agreement helped alter the course of the Civil War. When I came across that alliance, I knew it had to be in the book.

And of course, in the novel, Cotton Malone gets involved because of a threat to the integrity of the United States.
Yes. He gets drawn in and realizes there's a cabal involving people who are after something that could very well have a real basis in the Constitution. The entire fate of the country is at stake in the novel. Because if one state can leave the Union, a cascade of secessions could begin. When I started writing this novel, I would have told you secession is ridiculous. After researching this issue thoroughly, I would not say that now. It's an interesting constitutional issue and the answer is not as clear cut as many people think.

In each of your novels, you combine history from hundreds of years ago with a present crisis. How do you think up these plots?
That consumes my thought processes every day. Writers spend ninety percent of their time thinking about what to write and ten percent actually writing. This novel's plot had twists and turns, and required a good deal of careful thought. I start with a germ of an idea and a plot begins to form. It takes me about eighteen months to pull it all together. It's an ongoing process. It doesn't materialize all at once. It comes in little spurts. Sometimes the spurt you had last week doesn't seem terribly good, so you get rid of it and go somewhere else. The arc of a novel is not a marathon. It's a series of short sprints. When you're done, it forms a novel.

Do you have a favorite period in history?
I once would have said the Medieval Period was my favorite, but now, I really don't have one. I've written books about the ancient past--The Alexandra Link; about American history with The Jefferson Key; and now with Lincoln and secession. I'd never done anything about China which is why I wrote The Emperor's Tomb. I really love all history.

With America's changing demographics, do you think you will incorporate more history of Asia and South America into future novels?
I've barely scratched the surface of those areas. Yes, definitely. South America will figure into a novel. There will also be more about Asia. I would love to do a book about the South Pacific, an area that fascinates me.

If you were teaching history at the elementary and high school level, would you make any changes in the curricula?
I would change the way we teach history. A few years ago, I was invited to speak to the history section of the Tennessee Educators Association. We talked about teaching history differently. History is filled with facts and dates. If you teach it that way, it's boring. History is a story. If you weave it into story form, children will be much more interested. That's one reason video games capture people so effectively. They tell stories and engage the imagination. History can do that if you teach it from a story-telling standpoint. It's all contextual and it all weaves together. History doesn't involve isolated situations. That's the cool thing about human development -- it's all interrelated. And you must tell and teach that story.

Why is history so important?
Let me give you an example. In China, each time a new emperor took over, he eradicated everything from the preceding dynasty. All books and records were burned. It was as though the previous emperor never existed. This went on for thousands of years. When the Jesuits came to China in the 17th Century, they brought a water clock. The Chinese were fascinated with it; they thought it was the greatest thing they'd ever seen. The Jesuits were amazed and asked "Why is this the greatest thing you've ever seen? You invented it." The Chinese had no idea of what they had accomplished. That illustrates why history matters. It matters where you came from, where you were. It matters what you did. It makes you what and who you are now. History is how we learn who we are; what we are; and where we're going. And this relates to one's personal history as well.

As a highly successful author, do you have any advice for beginning writers?
Learn the craft. Writing is not a haphazard venture. There are do's and don'ts. Can you be creative and imaginative and break the rules? Absolutely. But you must learn the rules. You must learn the craft of writing, and there's only one way to do that: you must write and you must read your genre. So my advice is to learn the craft, and keep writing and reading. By doing that, you develop mastery of your own style.

What are you reading these days?
Not very much for entertainment these days. I read about twenty novels a year because I'm asked for blurbs. I enjoy them all--they're thrillers. Most of my reading is non-fiction. I'm reading material for the 2016 novel. I've completed the one to be released in 2015. In the book business, you stay a year ahead.

What's coming in 2015?
The tenth Cotton Malone adventure will be about a constitutional issue I recently came across. I don't want to give it away, but it's called The Patriot Threat.

Congratulations on The Lincoln Myth, another novel that brings history alive in an engrossing and entertaining way.

Steve Berry and his wife launched History Matters. This organization raises money to assist communities with restoration and preservation of historic sites. To learn more about Steve and History Matters, visit www.steveberry.org