Usually around this time of year, there's a pulsing coming from my purse. I don't pay attention to it, but like a heart beating in a horror movie, it won't be ignored.

If I open my purse to root out a dusty M&M, the list smugly stares up, "didn't you break up with blue food?"

My New Year's Resolution List usually starts with the desire to lose between ten and three thousand pounds. In the middle, I list career goals and coveted shoes. Somewhere near the end I'll add something about donating more often to charity and reducing my carbon footprint.

I start out with good intentions but by mid-January, the list will be stuck to my cheek because I napped on it as I watched fit people exercise on cable TV.

By the end of January I detest the list and avoid it, all crunched up at the bottom of my purse. By February I've bought a new purse.

This year, I got to put something different on my list. I wrote just one thing: I resolved to be a good mother.

So, this is the first year I don't loathe my list. In fact, I laminated it. I'm thinking to make it into a brooch. Too much?

I got to write this first time-resolution because early last year, my husband Ian Gomez and I adopted a little girl.

...not because an adopted child seems to be the latest Hollywood must-have accessory. But because, after ten years of banging my head against the brick wall of infertility, I accepted there was another plan for me. And (cue music swell) motherhood turned out to be the most meaningful thing I've ever done with my life. Really.

It wasn't easy to adopt an American child. Actually it's quite simple, but finding out how to do it was the hard part.

I tried many routes that fell through or didn't work out. Then I waited on many lists. The phone didn't ring.

Later, I was put in touch with a lawyer who works with, how shall I put this daintily... known people in my industry, and was informed I could be put at the top of The List and "have an infant within three days." But didn't that mean I would be moving someone down the list? Someone who had waited? Yeah, wrong.

I didn't know what to do. So, I kept asking questions.

A common misconception is that to get a kid you just have to go to another country and be as pretty as Angelina Jolie. As studio executives and movie reviewers have informed me again and again -- I'm not.

I realized there was simply no reason to not adopt an "older child." Why not? 129,000 legally free children with no home? In a white hot moment, I knew this was what I had been waiting for.

And now I want to write that it was really easy. But, no. No, it wasn't.

The next phase took a while because the information on how to adopt from foster care just isn't out there. Not sure who to approach, I went directly to the State and said I was open to any sex, age and ethnic background.

Oh goodie, they exclaimed, because then they could place an at-risk multiple sibling-set in my house on a trial basis, and an adoption might come out of it after the parental rights were terminated in court in a few years.

My mouth went dry. Like, just-licked-a-pumice-stone dry. That sounded complicated. But, I really, really wanted to be a parent. So, I said "okay!"

I did ask about the 129,000 children who were already legally free and was told there was a process and I had to be patient through the legal system. I explained I thought I would be connected with a child who was waiting for a home. Again, they explained I had to trust their procedures. I now felt apprehensive, thinking I might get lost in yet another situation that wouldn't resolve in a positive way.

At this point, it had been years of trying so many routes, of waiting on so many lists. I kept thinking about those statistics of how many kids were in foster care. Then, I remembered... when I was in the cast at The Second City, we used to improvise in front of an audience. That's a trapeze without a net. In this same way, I felt...I just had to jump. So I repeated, "okay!"

I was sent away with a thick packet of fingerprinting forms and a daunting Home Study kit. As I sorted through the mounds of paperwork, I found out about... (cue lightbulb click) FFA's.

An FFA -- Foster Family Agency -- helps individuals navigate the state system. The people (I like to call them super-pretty angels) at the FFA we worked with were helpful, compassionate and organized. They assisted with the paperwork, explained and set up the Home Study and did a nationwide search for a legally free child they felt we could be good parents to. Nine months later through their various connections, we were "matched" with our daughter. Working with a private lawyer, our adoption was finalized within a year.

And yes, she is perfect. She is a toddler, under the age of five, and to say she's adapted well would be a huge understatement. The experience of transitioning this child was astonishing and well, just too personal to go into now. We kept it quiet for almost a year to protect her privacy and give her time to adjust.

Last November as the holidays approached, my husband and I thought about the 129,000 kids waiting for a family and decided to announce our daughter's adoption to raise awareness of National Adoption Month.

This is why I'm writing about this now. Maybe there are other people out there who want to adopt a child through FosAdopt.

I will tell you this much: you will meet amazing people who will reaffirm your belief in the goodness of the human spirit. These people are committed to helping children achieve a fresh start in life.

One of these groups, The Alliance For Children's Rights invited me to be part of a fantastic event called National Adoption Day.

On November 15th, 2008, in over 300 cities, 4,000 children were adopted in one day. All this paperwork is processed in one day, because several hundred lawyers and judges work pro bono to assist in the finalization of these applications so parents who may not be able to afford lawyers and court fees, can adopt a child.

I met amazing people that day -- single mothers who adopted older children, gay couples who were adopting again, families who had biological children and adopted more, older couples who fulfilled children's dreams of finding a family.

I even got to go into the courtroom and assist in the adoption of two children. I was actually allowed to ask two women the Oath Questions I myself had answered. Like me, they promised to be good mothers to their children. 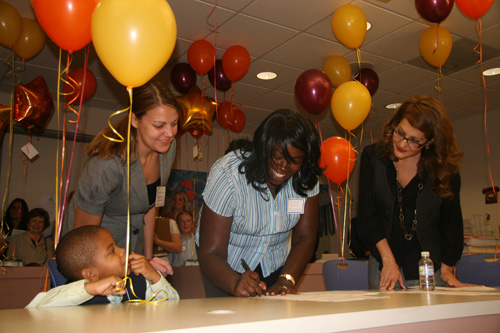 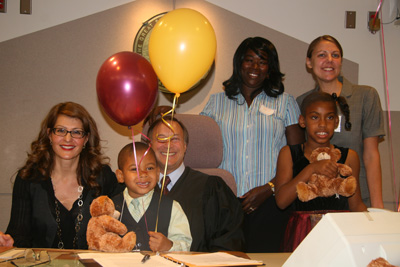 It was a day so filled with love and joy I felt like there were cartoon bluebirds chirping above those kids' heads. I cried like someone's crazy aunt at a graduation.

It was amazing, uplifting and a better Slurpee head-rush than I've had on any red carpet. (Except for the time I didn't wear undies. Cue my mom's phone call "why would you tell them thaaaat?") But I digress.

So if you're interested...let's discuss adoption.

There seems to be the impression that it's difficult to adopt in the U.S. Having been through the system, I want to tell people how to do it: just find an FFA (Foster Family Agency.)

An FFA will help you navigate the system -- they will walk you through the paperwork, the necessary and thorough background screening process, and the procedure of adopting from foster care in the U.S.

I would never disparage anyone who goes outside their own country to adopt -- every child deserves a home. I am Canadian with U.S. citizenship, and I would have adopted from any country -- I signed up on many waiting lists. I do want to point out the U.S. FosAdopt route includes a child's full medical and health record. In terms of your child's lifelong medical care, full disclosure can help. (Again, it's not necessary so if you want to adopt from anywhere -- any country, any planet -- do it.)

U.S. FosAdopt welcomes families of all income levels, and unlike private adoption is virtually cost-free. The FosAdopt system doesn't discriminate -- single parents, older couples, all may apply. Also, because of my sadness over hateful Prop 8, I would like to gleefully point out FosAdopt does not discriminate against gays and lesbians. Whee!

A family is a family, and there are 129,000 kids waiting for one. Our daughter came to live with us, and turned our house into a home.

Nia Vardalos is an Academy Award and Golden Globe nominated screenwriter and actress. Her next films are the romantic comedies My Life In Ruins, and I Hate Valentine's Day, which she wrote and directed.

To learn more go to:

To find your local FFA, go to: childwelfare.gov/nfcad