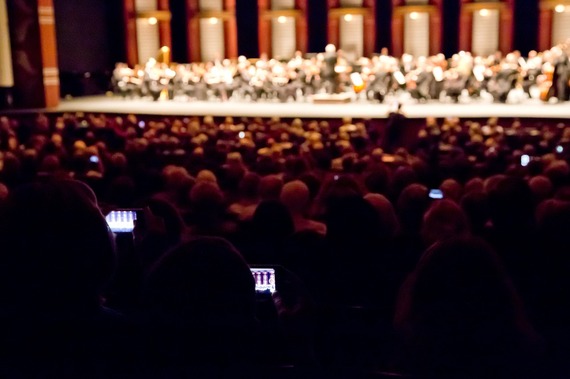 It is always astonishing when a simple gesture leads to a heated debate.

At the start of a tour to Florida with the Detroit Symphony, we decided to try something just a bit different. When the main portion of the program concluded, I asked the audience to do something completely opposite of what the Voice of God told them at the top of the show: "Turn on your cell phones!"

They were invited to take photos and share these on various social media sites. The next day, not only were the pictures up and running, so were the various message boards with comments pro and con. The arguments against this act focused on the sanctity of the concert hall experience. The voices in favor dealt with the same.

Certainly this action was not meant in any way to disrupt the music. There is nothing more annoying these days than to go to a movie or other gathering place, where attention is supposed to be directed at the presentation, and to see the glare of those small screens.

Context is everything. Concerts these days begin with admonishments rather than welcomes. Turn off the phones, no photography, don't record anything. Why don't we start giving the audience just a bit more credit? As has been reported over the past few years, there are always disruptions, whether a cough, a hasty exit, or a ringtone. During Beethoven's time, the public got up and walked around during a performance.

I have written previously about allowing the audience to have the opportunity to express its appreciation of what is taking place, rather than just sitting politely, keeping emotions in check. It is unreasonable, and actually uncomfortable, to have 1,500 people regimented in such a formal way. Certainly there are unacceptable levels of disruption. A breakdown of concentration from both the stage and attendees can be off-putting for everyone.

It has been noted that some journalists who report on concerts from the popular culture are calling for an end to the din coming from the audience. They are tired of the texting, tweeting, and teleprompting emanating from the mobile devices. Even some performers are requesting the crowd to cool it.

All we did in Florida was try to loosen up the shared experience. I told the audience that they should make sure the ringers were off, and that we hoped they enjoyed our concert. From reports on the scene, our patrons ate it up. They felt liberated and even more connected to the orchestra and stage. No one I spoke to in the DSO objected, and it certainly was not disruptive to our very brief encore.

As I bid the audience goodnight, when the final chord of "Touch Her Sweet Lips and Part" faded away, there was no question in my mind as to the appropriateness of what we had done. Would we continue to do this at all of our performances? On this tour, yes. At home, probably not, as we are already connected to our audience in so many different ways.

Should other orchestras attempt this? That is up to them, but certainly each and every ensemble must find new ways to reach the public these days. If just a little bit of relaxation of the unwritten rules helps, I can truly see no harm in this. However, all the artists must be comfortable if actions such as these are taken. So it really is about the individuals and their own level of toleration and expression.

Perhaps vindication of what we did came from a member of the audience who turned up backstage after the performance. "Thank you for making us a part of the show," she said. And isn't that what communication is all about?