Today "The Little Mermaid" turns 25 years old. When it came out, in 1989, Disney had gone three decades without a big hit: "Sleeping Beauty," the last major success, was released in 1959, six years before Walt Disney's death. The studio had spent far too much time without a leader, and there was new generation on the rise -- one that had worked with the animators that came up under Walt, but were equipped with their own set of modern sensibilities. In celebration of the Disney renaissance started under the sea, we spoke to co-writers and directors Ron Clements and John Musker to figure out how they turned Hans Christian Andersen's disturbing fairy tale into a classic children's movie.

"In the end, she loses the prince and she turns into sea foam."

With a big pitch meeting coming up, Ron Clements went to the book store in search of his next great idea. He was unfamiliar with "The Little Mermaid" before stumbling upon it that day, and thought Hans Christian Andersen's cinematic writing style would make for a great film as soon as he started reading. That is, until he saw how it ended. "I realized it was an incredibly sad story, with a very, very sad ending," Clements told HuffPost Entertainment.

Andersen's "Little Mermaid" is far more tragic than the story of Ariel that has since left an indelible mark on popular culture. The 1837 protagonist is motivated not only by her attraction to a prince, but the eternal soul that humans possess and mermaids do not. With the help of a sea witch, she trades her voice for legs. Andersen's mermaid must obtain true love's first kiss or the deal will result in her death. She attempts to enchant the prince with her dancing, despite the fact that it feels as though she is stepping on knives. He marries the human princess, whom he thinks saved him from a ship wreck (though, the little mermaid is truly the one responsible for his rescue). She is given the option to murder him in exchange for becoming a mermaid again. "In the end," as Clements put it, "she loses the prince and she turns into sea foam." 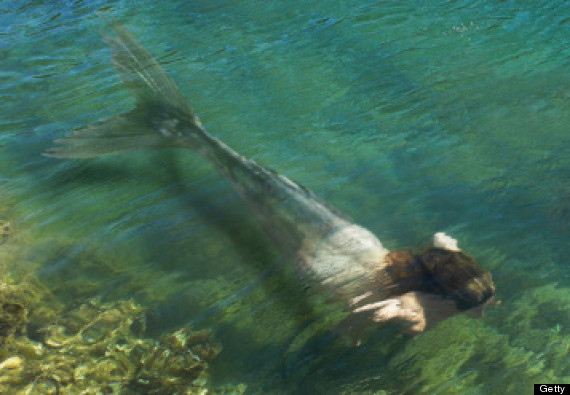 Clements came up with the name Ariel and reworked Andersen's ending for a "gong show" in January 1985. The name "gong show" came from a process Michael Eisner pulled from Paramount: story writers and directors would pitch a series of ideas, and the bad ones would get gonged.

"Can you really do that? Can you have the star of your movie actually lose their voice for a significant amount of time?"

It turns out the story of "The Little Mermaid" who lived happily ever with her prince got gonged at first. Disney was working on a sequel to "Splash" at the time, and they thought it was too similar. Although, a few days later, Clements got a call from the studio, saying they'd like to hear his ideas again. Weeks later, "The Little Mermaid" was green lit. Clements teamed up with John Musker, with whom he'd worked with on "The Great Mouse Detective," and the two got to work envisioning the film that would pave the way for the Disney renaissance. 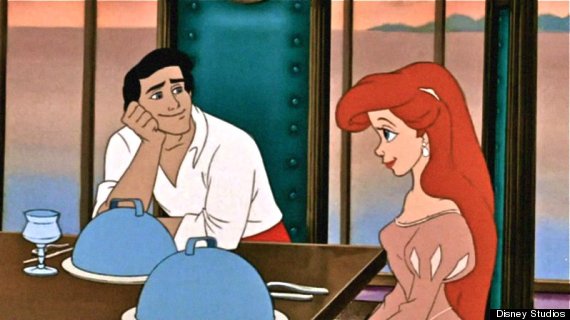 Clements and Musker were willing to rework much of Andersen's story. Although, there were certain elements they felt they couldn't leave behind: the idea of love at first sight and Ariel's loss of voice.

"I know it was controversial," Musker said of their stance. "I know even with the script there were people that really questioned, ‘Can you really do that? Can you have the star of your movie actually lose their voice for a significant amount of time?’”

"It was particularly challenging for the executives reading the script at the time," Clements added, "because a lot of time they don’t read the stage description, they just read the dialogue, and then suddenly she had no dialogue in the middle section of the movie."

"In the movie we also deal with love at first sight, which can be controversial, I guess," he said. "That’s a fairy tale thing that goes back to fairy tales from the beginning. That was a big part of this idea of two people who really have not met each other, but are destined to be together. With slightest bit of interaction, they just know." 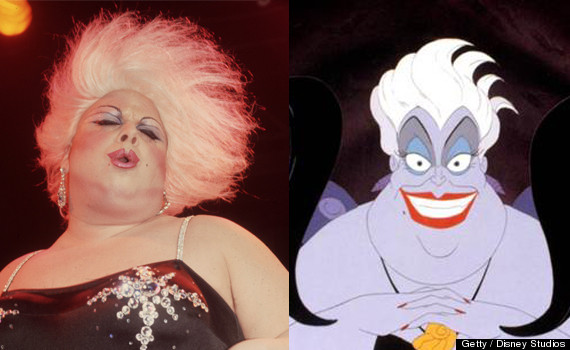 Interestingly enough, in making this disturbing fairy tale kid-friendly, one of the biggest changes they made was creating a more forcefully evil sea witch. In Andersen's story she acts as an enabler, but Clements and Musker knew that Ursula was their chance to create a classic Disney villain.

"Ursula is essentially a mix of Bea Arthur, Joan Collins' 'Dynasty' character, Divine and an octopus."

Once they made that choice, a lot of possible inspiration popped up. In short, Ursula is essentially a mix of Bea Arthur, Joan Collins' "Dynasty" character, Divine and an octopus. That took quite a bit of brainstorming to come together, and the octopus part was only added in animation.

"Ursula started out in different forms," Musker said. "At one point she was a lion fish, and a manta ray, and an octopus, and then as she came to life, that was just cool to see how they could use her tentacles to play the villainess."

He had Bea Arthur in mind for the part. Even though they never got a chance to sit down with her (due to her "Golden Girls" schedule and possibly the fact that she did not want to play a witch), Musker kept her sardonic wit in mind throughout creation.

Divine's name popped up when Musker and Clements presented the character to producer and head of the music department Howard Ashman.

Ashman knew Divine from work in John Waters' films and suggested Harris Glenn Milstead's stage persona serve as inspiration for Ursula. He also immediately made a connection between the sea witch and "Dynasty."

"We described her as vampy and campy, and he was like, 'Oh yeah, she’s like Joan Collins,'" Clements said. "So, when we wrote our script, John was picturing Bea Arthur and I was picturing Joan."

The two got to have a lot of fun in playing up that campy evil gloriousness. They pulled the polyps from Andersen's story (originally guards of the sea witch's castle) and made them condemned mer-folk. Before studio edits, they actually included a character called Harold the merman, who wanted to be handsome, but was fated to life as a polyp after he could not pay Ursula back.

Ashman was also largely responsible for the development of Sebastian, who appeared in early treatments as a crab named Clarence. At that point, he had an English accent. But Ashman knew right away that he wanted to make Sebastian Rastafarian so that he could logically incorporate calypso elements into the music.

Musker and Clements had a stuffy character in mind, and they didn't know how that could work with an "island guy," so Ashman suggested they model Sebastian after Geoffrey Holder.

"The idea was for Sebastian to be a sort of Geoffrey Holder character."

"The idea was for Sebastian to be a sort of Geoffrey Holder character. Back in the day he was well known as the 7-Up man," Clements said. "Those commercials were he was very expansive and grand, and he spoke in the Jamaican patois. Howard said, ‘That’s what I’m picturing with the crab. He can still be very grand, he’s not just laid back.’”

"Under the Sea" claims that not having to work is one of the main reasons "life is better when you are wetter," an element that has led to backlash condemning the song as racist (with the fish coded as black). Although, Clements and Musker seem surprised by that allegation. "He’s a very hard-working court composer," Musker said of Sebastian. "That never occurred to us, and I’ve never actually even heard that."

Ariel herself underwent quite a bit of transformation from that first treatment. Initially, she was modeled closely after Andersen's little mermaid: shy and passive. The rambunctious curiosity she came to be endowed with originally appeared in the form of a male dolphin sidekick named Breaker, who was cut from the film.

"His was very energetic and adventurous," Musker said. "Then, we got a note in the early development of the script that we had too many characters, so we ended up eliminating that dolphin character and giving some of his personality to Ariel. She became as energetic as the dolphin was."

That helped in modeling Ariel after a rebellious human teen. The artist, Glen Keane, pictured Alyssa Milano when drawing her, though Musker and Clements pulled their inspiration from teen movies. They looked to then-current releases like "Footloose," in hopes of tapping into the modern aspects of adolescence.

"We wanted her to feel like a real teenager, so we looked at movies about teenage girls," Clements said. "She has a grotto filled with human objects, which was a little bit, in our minds, like a teenage girl who has all her posters gathered around."

The sense of rebellion that is almost synonymous with any child's teenage years was very important to the story they wanted to tell. For both Musker and Clements, "The Little Mermaid" is first and foremost about a father and daughter.

"Although, the love story was important, I thought the father-daughter relationship was a key thing really right from the start," Musker said. "It was about stretching boundaries and parents wanting the best for their children but maybe having a different idea about what that is than what the child does." 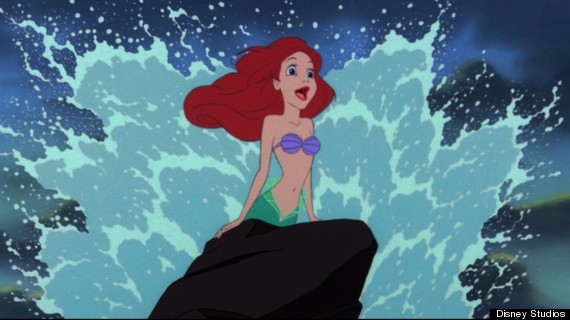 "These films are almost a rite of passage. It's a way for kids to process difficult things in the world."

While trying to make things relatable, Clements and Musker ultimately set out to create a film that they would watch. "We didn’t think we were making the movie for a bunch of little kids. We were really making it for us and hoping that other people would like it as well," Clements said. "That’s the way to make these movies, to do things that you get moved by or find funny. That’s your best clue as to whether or not it’s working."

Even though it is removed from the tragic origins, "The Little Mermaid," like any Disney movie, has dark and sexy elements that are retrospectively surprising for a G-Rated film.

"We wanted it to be scary. We liked the 'Wizard of Oz' and things like that," Clements said. "I think fairy tales have those dark elements. These films are almost a right of passage. It's a way for kids to process difficult things in the world. There are always light moments along with the dark. To me, it’s sort of a nice contrast."