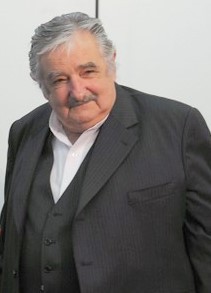 [Author's note: Ambassador Pita's comments have been translated into English from Spanish.]

When diminutive Uruguay opened its territorial arms to six detainees previously held by the United States in Guantanamo, Cuba, it could hardly have expected the geopolitical impact of its good-will gesture. As the United States initiates the first steps towards dismantling the five decades-long sanctions with Cuba, the back story of the detente intrigues and provokes almost as much as the center narrative itself. This is in large part because of the idiosyncratic personality at the center of that story: Uruguayan President Jose "Pepe" Mujica. He emerges as the power broker we didn't see coming. And Uruguay itself has a sustaining appeal all its own, as a torch-bearer of traditional mores and, somewhat paradoxically, an incubator of modern, avant-garde rights and freedoms.

Mujica could well be the most austere of any sitting head of state. He was dubbed the world's poorest president by the BBC. He lives in the country in a home with a rusting roof, eschewing Uruguay's stately and elegant presidential manor in the capitol. In lieu of a motorcade, Mujica drives an '87 Volkswagon beetle. He has become an international icon after leading the struggle to legalize same-sex marriage and creating a government-regulated marijuana market. He is a former Tupamaro revolutionary who endured more than 10 years of solitary confinement under military rule. His courageous decision to open his country to the former Guantanamo detainees was coupled with a biting characterization of the Gitmo process in general. The detainees, Mujica said, had been subjected to an "atrocious kidnapping." The United States "on the one hand wants to wave the flag of human rights, and assumes the right to criticize the whole world, and then has this well of shame," he said. In order to help Obama right that humanitarian wrong, Mujica decided to tap his presidential powers to take in the detainees, which was not a popular decision in Uruguay.

Mujica had long stated his desire to see three Cuban nationals who had been tried, convicted and jailed in the United States set free. He also made clear his desire to see a normalization of relations between the US and Cuba. The day the Guantanamo detainees landed, Mujica sent an open letter to U.S. President Obama, asking that those actions be taken in the spirit of reconciliation. A few days later, the United States completed what was in effect a prisoner swap with Cuba and announced a normalization of ties with the island nation. As Mujica, who also played a mediating role in the U.S.-Cuban negotiations, described his country's influence: "Uruguay puts its humble grain of sand" in trying to effect a reconciliation. "Whenever you can help with some injustice, Uruguay's attitude should be not only to reduce tensions, but to eliminate them."

In order to better understand Uruguay's role in the U.S.-Cuban detente, I spoke to the country's ambassador in Washington, Carlos Pita, who himself is a unique political phenomenon. Like many other notable left and center left Latin American politicians, Pita is a physician. In the mid-1980s, during Uruguay's restoration of democracy, he was affiliated with a right of center political coalition and was elected to the national legislature. But after his party pushed through an amnesty law that protected officials who participated in torture and murder during military rule, Pita switched sides and joined the center left coalition (the Broad Front) that is governing Uruguay today, and was reelected three times.

When I asked the ambassador whether he thought Mujica's advocacy helped to elevate the priority the administration assigned to the Cuban reconciliation, he said:

"I think so, basically because of Mujica's willingness to stand up to problems. Not talk about problems, but rather look for the solutions. I understand and respect all the passions involved and I have absolutely no right to get into any issue related to the internal politics of the United States. But I do have the right to say that Uruguay sees the lifting of the U.S. blockade and the normalization of relations as very good news--very good news for the whole continent, for hemispheric relations. It's a very good thing to end all that. Imagine an America without war in Colombia and with normal relations with Cuba. Different, right? Different for the better."

But Pita sees Uruguay's ascendance on the world stage as part of a time continuum for Uruguay, rather than an uptick--a rather gracious analysis for an ambassador who could instead tout the achievements of his own political party. "Being a small country--and a country of immigrants that had launched themselves onto this world to seek out new opportunities far from their countries of birth--gave the society an openness to the world. It's a country that has always had a vocation for participating in global evolution. It has an awareness of being in this world, and being in need of the world."

Indeed, Uruguay is the world's biggest contributor of troops to peace-keeping missions on a per capita basis. It has taken a role in helping people in need, taking in Syrian refugees from the current conflict and, going further back, aiding the creation of the state of Israel. Little Uruguay also has some the highest social indicators in Latin America, in terms of literacy, per capita income, and democratic integrity. It's solid democratic and republican credentials also bolster its international bona fides, said Pita.

Mujica also fits into a long succession of humble heads of states. Uruguayan presidents have customarily opted against the pomp, circumstance and expenditure so often bestowed on a country's highest elected official. "Somehow with his style he made more visible something that I think is traditional to Uruguay," said Pita. "Almost all of Uruguay's rulers live in the same houses they've always lived in."

There is also, of course, the Obama-Mujica relationship itself. "I think they hit it off," said Pita of the two leaders. "I think it began in the Summit in Cartagena in 2012. I remember that President Obama was there, and, sure, Uruguay is one of the last to speak, because of the U, right? Well President Obama had gotten all sorts of criticism. And at that point in the meeting, after so many [leaders] had talked and so many had [criticized him], Obama was at that point talking with some of his delegation partners to pass the time. And when it came time for Mujica to talk, he said: 'Well I can't believe this. All our lives we've been asking for the president of the United States to come to the Summit of the Americas, and now that he's come, you do nothing but criticize him. Please, poor guy, we have to pay him homage.' And then, President Obama starts to listen, he turned around and started laughing, and that's how the bond of goodwill began."

With Mujica winding down his term in office, Pita said Uruguay is committed to continuing a kind of sleeves-rolled-up, working relationship with the United States to address the toughest problems of the hemisphere, and the world. "If we can help set an example with a gesture of solidarity to end a situation that is so ignominious--because it is ignominious, the situation with the jail in Guantanamo--and President Obama asks for help, we have to help him. And if we have to help with the Syrians, then we have to help with the Syrians...In summary, it's a sense of pragmatism, in the service of common values. And our differences we will address at the Organization of American States or the United Nations. But we have to look for potentialities. And Uruguay showed that it doesn't matter what size it is, it can help with these things, if it commits itself."

The present is a good moment for Uruguay. It's citizens are enjoying a rise in income and a second-generation of rights. And it has put itself in the unlikely position of coming to the aid of the United States. Little Uruguay has managed do the world's only superpower a favor. Pita looks back, and assesses the situation in personal terms. "Things are a lot less complicated than they seem if you analyze them from the perspective of--in addition to reason, in addition to the most professional aspects of the issues--one puts out in front, I would say, values and common sense. It's as simple as saying that if you want to ask others to help solve a problem, that you have to help, too. If not, you have no authority."

It goes without saying that Uruguay did not put a reconciliation with Cuba on Obama's agenda. But it does appear to have hastened the timing of a deal. And with a move of that sort, political timing could be existential for a deal that is just an idea. Timing distinguishes political possibility from status-quo stagnation and an imperative from a policy preference. The embargo had accumulated all the inertia of time and exile activism. If it weren't for the will of an idiosyncratic leader, who himself had endured more than a decade of harsh imprisonment, who was moved to take prisoners held without process who no one else wanted, would Obama today be the author of U.S.-Cuban reconciliation that took over 50 years to fulfill?

Note for the Reader: Please beware the copious and unabashed bias favoring Uruguay in this article. The little-big Latin American country is the country of origin of this author's parents. The time spent "afuera" in the pampas and around the glowing embers of "asados" has instigated for this author a life-long, irredeemable bent for the country and most things Uruguayan.