Recently, I was misquoted in a HuffPost blog post by a prominent voice among moderate Muslims in the United States.

This kind of thing does tend to happen when one writes about contentious or controversial topics like Islamophobia or the problems with Islamic moderation, and in most cases, my personal policy is to let it slide. The Internet is a vast universe of its own, and you can only go so far trying to counter every last mischaracterization of your words. This most recent mischaracterization, though, was more interesting; the words attributed to me are words I have never said or written at all. In this, I find a teaching moment.

The article, entitled "Of Free Speech, Islamophobia and New Atheism," references a comment thread on my Facebook page discussing free speech. The author, blogger Kashif Chaudhry, was writing in the context of a recent petition requesting UC Berkeley to rescind its invitation to Bill Maher, calling Maher a "racist" and "bigot." Mr. Chaudhry's article contains the following passage:

I posed a simple question to new atheists on a social media page: "Suppose you were the Dean at Harvard, would you invite a homophobe or a racist to speak on homosexuality or race relations respectively?

...The majority of new atheists who responded to my experiment, including fellow blogger and Pakistani ex-Muslim Ali Amjad Rizvi, responded differently. Ali insisted he would never invite a homophobe, or a racist, to speak at Harvard University. And if someone invited such a speaker, he believed students would have full right to protest the invitation. They would merely be "exercising their basic right to free speech" in doing so.

This is not what I said. Here's what I actually wrote in response to the author's question: 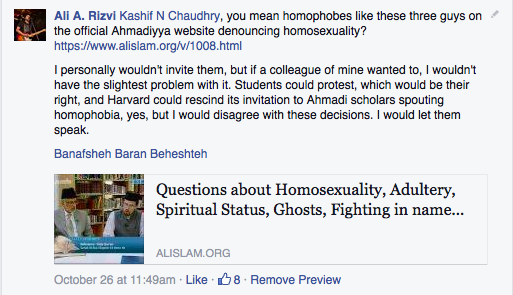 Here is a link to my comment and the entire conversation thread on Facebook. My point was that devoutly religious people often vehemently oppose homosexuality (including those of the author's faith), and they are invited to speak at universities all the time.

Never mind that Mr. Chaudhry didn't source or link to my alleged quote in the way I have done with his quote above. The more interesting question is this: why deliberately mischaracterize what I said to make your point instead of quoting my words outright? Herein lies the teaching moment.

In gauging the responses to my writing, I have a personal rule: don't just look at what is being written, but why it is being written. Here is where I find reason for optimism: this kind of grasping-at-straws, evidence-manufacturing behavior typically occurs in the absence of a cogent counter-argument.

Another writer, who I have previously debated on HuffPost Live, and who has written at least two articles in response to mine in the last year, is not as obvious in his mischaracterizations. He was called out on Twitter by Sam Harris after attempting to characterize Harris as a supporter of rape -- this blog post shows nicely how this played out.

The writer, Qasim Rashid, is the spokesperson for the Ahmadiyya Muslim community in the United States -- a moderate, temperate sect of Islam that commendably denounces jihadist violence and is renowned for its admirable philanthropic contributions around the world. Sadly, the Ahmadiyya Muslims are badly persecuted in countries like Pakistan, where they are considered apostates from mainstream Islam.

The Ahmadiyya community rightly calls out mainstream Muslims for not considering them Muslims. The Pakistani government does not even issue identity cards or passports to Muslim citizens unless they declare on the application that the Ahmadiyya are non-Muslims. This is a long-standing, legitimate grievance that the Pakistani Ahmadiyya have -- in a country known for its horrific blasphemy laws, you can imagine the kind of persecution this subjects Ahmadiyya Muslims to.

While researching a chapter on religious moderation in my upcoming book, I approached Mr. Rashid, an articulate, learned scholar and lawyer, to ask about Ahmadiyya Islam. It was regarding a quote from the founder and first khalifah of Ahmadiyya Islam, Mirza Ghulam Ahmad, who once said,

God has revealed to me that every single person who has heard my claim of prophethood and has not accepted me, that person is not a Muslim, and in front of God, is subject to prosecution.

Mirza Ghulam Ahmad is considered infallible by Ahmadiyya Muslims. The quote (in Urdu) appears at the bottom of page 519 in the khalifah's book Tadhkirah, found here on the official website of the Ahmadiyya Muslim community. I wanted to ask Mr. Rashid about this because it seemed to show that this was actually a two-way sectarian conflict -- that the founder of the Ahmadiyya Muslims also declared all non-Ahmadiyya non-Muslims.

When I asked Mr. Rashid for clarification, he acknowledged the authenticity of the quote, and responded with the following: 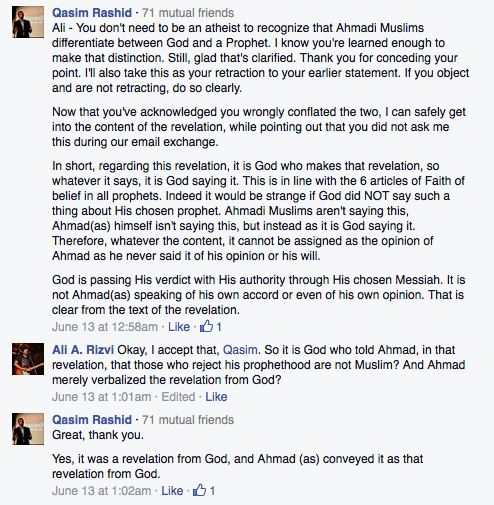 Again, this quote from Mr. Rashid and the entire conversation can be found here on Facebook.

His explanation is that the quote was a revelation from God, so cannot be attributed to the khalifah, who is merely a vessel for it.

There is no doubt that this kind of reasoning makes sense to vast numbers of religious people. But I implore them again -- as I did in my essay, An Open Letter to Moderate Muslims -- to consider how it appears to those outside their community. To us, it seems like a not-very-convincing sanitization of a very exclusionary, divisive statement.

In that essay, I explored in detail the problems of credibility that moderate Muslims face today, as someone who has been there. I expanded on it further in a post on Richard Dawkins' website focusing on the mindset of apologists like Reza Aslan. Here, my intention is to point out the same kinds of issues, as they appear in the discourse from minority Muslim sects like the Ahmadiyya Muslim community, which actually carries hope for the Muslim world in its reformative spirit.

Again, the thesis of my previous article was that every time a jihadist yells "Allahu Akbar" and executes a non-Muslim while quoting verses from the Quran, Muslims will face intense scrutiny of their faith. This is understandable, and can't just be blamed on the media or some conspiracy against Muslims. That does not mean Muslims should apologize for the actions of ISIS by any means. But it does mean that if they truly want to reclaim the narrative, they need to make a more serious effort at introspection and honest dialogue.