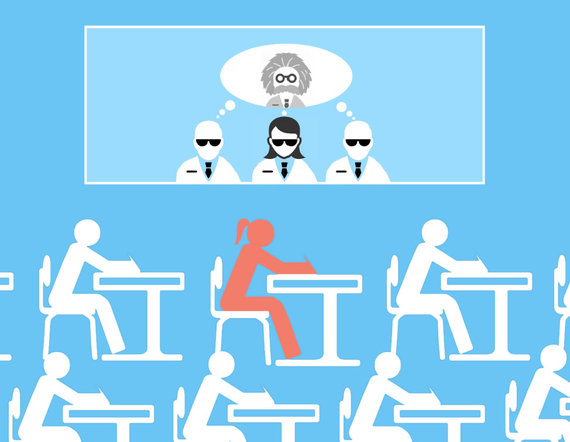 As a physicist musing about genius, I wonder whether I know any geniuses or whether the best physicists I know are just really, really smart. I cannot help but think about the romantic image associated with most scientific geniuses: brilliant minds stunningly producing transformative ideas in a magic moment of enlightenment.

Here come the well-worn examples of Isaac Newton with his revolutionary ideas about gravity that (supposedly) literally struck him when an apple dropped on him from a tree. Or Albert Einstein with his wild hair standing in front of a chalkboard covered in impossible-for-earthlings-to-understand equations pulled from his mind through pure thought experiments.

It's not just age-old tales. We come across a similar image of genius in the 2014 film "The Theory of Everything," where Stephen Hawking is portrayed as having a major revelation about black holes while secluded in his living room, peering at the coals in his fireplace. The image of genius that emerges, at least in science, is that of someone -- specifically, a man -- working in isolation to single-handedly conduct an intellectual revolution that can scarcely be understood by his peers. This picture of lone geniuses is not only inaccurate, but our affinity for viewing our intellectual history and its heroes through the lens of a lone-genius mythos is damaging both to science and to society.

Lone geniuses are not lone. Look closer and you'll find that they work in a wide community of people who often lay the ground for a scientific breakthrough. By focusing praise on one individual in isolation, we often miss the much richer and more exciting story of how discoveries are made -- stories that involve enigmas, partial solutions, near misses, epic failures, and active communities of people frantically working in collaboration or in competition to solve problems uncovered by the work of forerunners.

Consider the most famous equation in physics: E=mc². Known in connection with the special theory of relativity which was a paradigm-shifting theoretical advance. But it didn't happen all at once. Years before Einstein wrote down this equation, Henri Poincaré was discussing simultaneity and the relativity of space, and published something nearly identical. The less famous m=E/c².

Poincaré's work was spurred on by the failure of the Michelson-Morley experiment to show evidence for the then-prevalent theory of a background aether that transmitted light. Hendrik Lorentz developed the transformations to explain the experiment and Poincaré showed how the transformations could be made consistent with the principle of relativity. Only after this did Einstein derive the Lorentz transformations using the relativity principle and the constancy of the speed of light. Clearly the stage was set in a way that is rarely illustrated in the stories we tell about science and scientists. It is more poetic to envision Einstein inventing his theory through thought experiments while riding his bike in the Italian countryside.

Our tendency to view scientific history through the lens of intellectual giants sneaks into how society views different disciplines. It turns out that how much we apply the lone-genius paradigm to a given field changes who participates in that field. Success in some fields -- like physics, philosophy, and music composition -- are viewed by many, including the professionals themselves, as requiring an innate ability or genius, as opposed to requiring a talent that can be acquired and nurtured by hard work. Studies have exposed a direct link between the expectation of "genius" for a discipline and the gender and race gap for negatively stereotyped minorities.

One possible explanation for this trend is stereotype-threat. That's the fear of living up to a negative stereotype, often one held about a minority group, that is so overwhelming that you underperform and end up fulfilling the negative stereotype. People in situations like that become anxious, they spend more time thinking about how they are performing, and they struggle to quiet down the whirlwind of negative thoughts in their heads. All of which chip away at their performance.

It is well established that women and African Americans are stereotyped as not being good at math or physics. One recent analysis revealed that undergraduate students evaluating their professors attached the adjective "genius" to male physics professors far more frequently than to female and black physics professors. Imagine you are from a stereotyped group working in a community of predominantly white male physicists where you are expected to be a little "Einstein". You will likely struggle (often unconsciously) with doubts and anxieties about how you are matching up to others' expectations.

While the "genius" narrative may be a delicious treat for one's ego, it is harmful for the community. The way we combat this is simple enough, because it's simply the truth. We need to emphasize a collective paradigm, the opposite of the lone genius paradigm: that you don't have to be Einstein, that to reach your full potential the skills needed can be acquired through hard work, and that the field is collaborative.

We don't really need to put our geniuses on such a lonely pedestal. They are our intellectual and creative heroes and we should certainly celebrate their achievements. It doesn't diminish the greatness of Einstein to include the richness of the scientific process that led him to his famous equation. I would argue that it enhances the beauty of his accomplishments.

Let's be frank. Most of us physicists are not geniuses, though we are often labeled that way. We achieve with hard work, commitment, passion, mentoring, and collaboration. I know a lot of very smart physicists who work very hard and have excellent, creative ideas. I am lucky to be working alongside them, and feel constantly inspired by their smarts, yet I don't think its necessary to label them geniuses. In fact, I think if we stop calling them geniuses, it'll make our field healthier and more diverse.

We can start to change the lone-genius paradigm by telling fuller, more accurate stories about our contemporaries and our predecessors. Newton did not just come up with the concept of universal gravitation in one day. He sweated through twenty years of hard work to develop it. We must also fight some of the cultural stereotypes we now nourish against the capability and intelligence of underrepresented groups, and work to turn the scientific landscape into something that reflects the variety of our society.

This post is part of a series produced by The Huffington Post and 92Y's "7 Days of Genius" Festival, starting March 5, 2016. The festival's intent is to ignite a global conversation to explore the power of genius to make a positive impact on the world. For more information about the festival, and it's schedule of events in New York and around the world, read here. And to join the conversation on Twitter, follow #THATSGENIUS