Over forty percent of news segments in prime time are now under 30 seconds in length. Pew Research reports news snippets are getting shorter and shorter. The reason, of course, is the shock- and-awe entertainment dimension, which is crafted to dazzle viewers with novelty, garner greater market share, and ultimately sell more Prilosec and Preparation H.

The result of our media devolution is that American news consumers developed shorter attention spans and see the news much more discontinuously. They do not see long chains of events evolving--or better put--they do not connect the dots flashing before their mesmerized eyes every 30 seconds.

In 2010, the Supreme Court sided with Citizens United and limits on campaign contributions evanesced into the ether. That same year newly enfranchised Republican donors plowed money into state legislative efforts to redraw congressional lines. In Pennsylvania, for example, Democrats collected 44 percent of the votes, but won only 5 of 18 congressional seats, thanks to aggressive Republican-funded gerrymandering.

Another example of gerrymandered excess is the following congressional district in North Carolina (see pic). 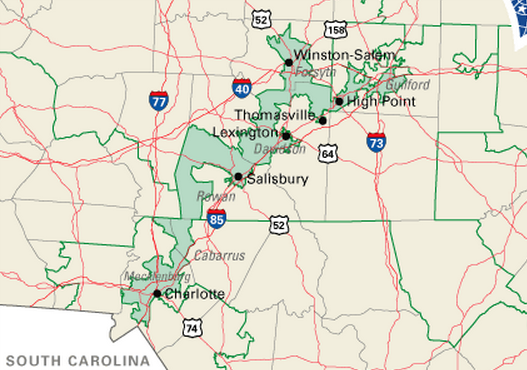 In this last election, where Republicans swept the House and Senate, only 37 percent of voters came out to the polls, the lowest turnout since 1942, but it was the most expensive midterm ever, with close to $4 billion spent. The Center for Responsive Politics reported that "in House races, the candidate who spent the most prevailed 94.2 percent of the time."

What is strange is that a September, 2014 poll said 72 percent of Americans disapproved of Republicans in Congress, and yet, six weeks later, they breezed into the House and Senate as if riding a populist mandate adorned with garlands of roses and confetti.

The cognitive dissonance grows curiouser and curiouser, especially when we realize it may not merely be money, but, recent studies by Princeton and the University of Michigan show that in the sixteen states using computerized voting, chances of hacking, fraud, and rigging were significant. Add into the mix Republican enthusiasm with voter ID laws-- which in Texas alone may have suppressed as many as 600,000 voters --the picture becomes even bleaker.

"Dark money," that is contributions where the donors do not have to be revealed, also reached record levels. "We've opened the floodgates to allow this," said Laurie A. Rhodebeck, a political science professor. "It's detrimental to voters because if they don't know who's behind the money, they can't judge whether to trust the ad or not."

But as we fret about the Democratic shellacking, we seem to forget recent history: sub-prime lending, the derivatives market, Michael Moore, the 99 percent, and the Occupy Wall Street movement. Old news, forgotten news, and none of those dots seem at all connected to last week's midterm Republican sweep.

In point of fact, under Obama, America's oligarchy grew ever more burly. Income inequality advanced four times faster under Obama than Bush. The filthy rich got 11 percent richer, or filthier, while the 99 percent got 0.4 percent poorer. The Gini coefficient, which measures income inequality, is now higher than it was even during the roaring 1920s bubble whose waters finally broke to give birth to the Great Depression.

The fat cats of the Great Recession who brought the economy to its knees and stripped Americans of 8 million jobs and 4 million homes, still luxuriate in their gated communities, and none of the Majordomos, like Countrywide's Angelo Mozilo, ever went to prison.

In fact, many of the gilded starlets of 2008 like Hank Greenberg (AIG), Lloyd Blankfein (Goldman Sachs), and Jamie Diamond (Morgan Stanley) are still around either as padrones or pundits, while the banks which were "too big to fail," says Sen. Elizabeth Warren, became "30 percent larger than they were five years ago"

Only this week, Diamond's Morgan Stanley, Citigroup, and Bank of America--three famed culprits of the Great Recession--face close a billion dollars in fines for manipulating foreign currency markets. All the way into 2014, they still ply their wares and game the system whenever possible. Former Fed official and Wall Street analyst, Andrew Huszar, argues there has been almost no change on Wall Street since 2008: "There is a complete sense of denial. . . and very little accountability."

Somewhere in our minds, we believe controls were put in place, like Dodd-Frank, and too-big-to-fail-recessions will never happen again. Maybe that helps us sleep easier, but our sweet dreams hang precariously on the gossamer threads of delusion and conspicuously ignore lots and lots of dots, most particularly the derivatives market.

This is the gambling casino of the American and global oligarchy, and it has only grown bigger. In 2008, it was valued at close to $600 trillion dollars, but today it is $1.5 quadrillion (!) more than doubling since Obama took office. The market--sorry, casino--is twenty times larger than the entire world economy. No wonder Warren Buffett calls it a financial weapon of mass destruction.

Mysteriously, we don't draw connections between these appalling financial excesses, manipulation of currencies, and rigging our elections.

If we take a step back and widen our perspective, though, the long march of the American oligarchy picks up its pace when the right-leaning Supreme Court removes sanctions on campaign contributions with its spasm of judicial hubris. Cloaked dark money then finances district-by-district gerrymandering, so that by the 2014 midterms, 96 percent of incumbents got re-elected -- despite the fact that an AP poll showed 88 percent of Americans disapproved of the performance of Congress.

The midterm sweep ushers in new Republican majorities in the House and Senate, but dark money also locked in state legislatures too, "the highest number of Republican-held chambers and legislative seats in history," boasts the Republican State Leadership Committee.

If the long march is successful, we can expect more Keystone pipelines, sophomoric but evermore strident denials of climate change, tax benefits for the rich, slashed entitlements for the poor, eviscerated inner cities, expanded voter ID laws, egregiously permissive leveraging in the derivatives market, and, of course, more foreign wars sanctified by the right's theology of American exceptionalism.

It is very likely indeed that the Koch-Brother-Rush Limbaugh wet dream of a corporate state of the rich, by the rich, and for the rich will greet us at the doorstep of the White House in 2016.

Maybe we need to start connecting the dots.

Jerry Kroth, Ph.D., is an Associate Professor Emeritus from Santa Clara University and may be contacted through his website, collectivepsych.com