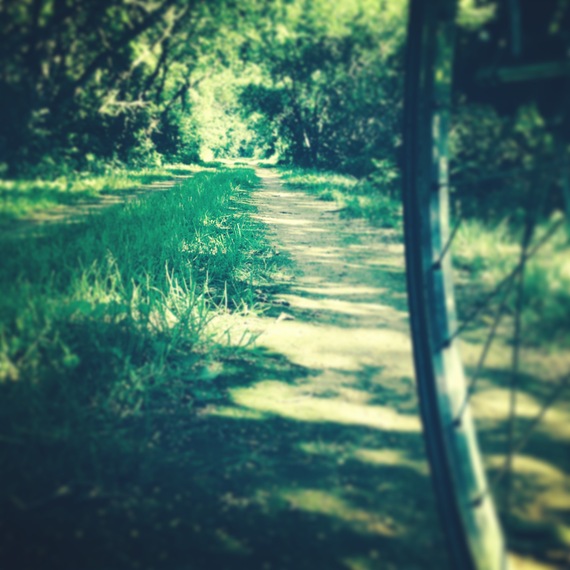 When I wake, soft light is slipping through the drapes, and the air is redolent of spoiling cheese, and I'm wondering where the hell I am. I blink sleep from my eyes and sit up and scan the room, and on a chair in the corner, I see a lump of Lycra atop a grease-splattered cardboard box. I remember: I'm at a pizza farm. I do not want to leave the pizza farm, ever. But I have to, and soon, because in three days, 225 miles away, I'll be giving a reading in Madison, Wisconsin.

I am excited but nervous to return to Madison, where, ten years ago, I graduated from college. Every time I come back, I end up feeling sad in a way that's hard to pin down. It's sort of like getting drinks with an old lover, and seeing how well she's doing, and wondering if I spent our whole relationship asking her all the wrong questions.

On this visit, I hope, I'll come up with some better ones. 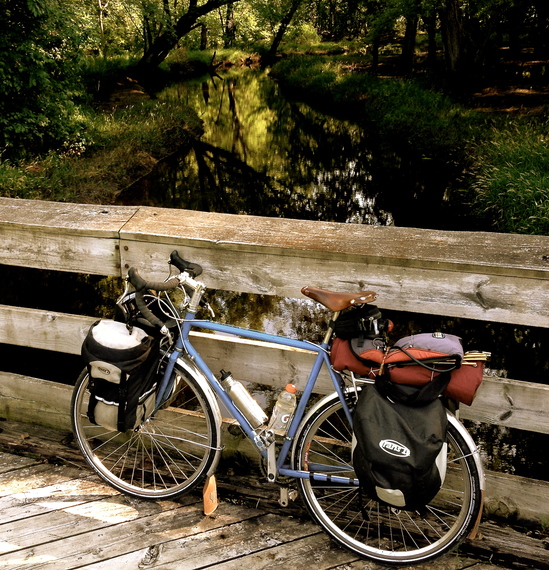 I inhale bacon and eggs with the farm crew, and then I load up and bomb down to the Mississippi, where I find the Great River Road living up to its name (finally). After thirty miles of wide open views and agreeable winds, I take a break in Fountain City, where a bike mechanic gives me free coffee and a tip about a pretty dirt road ten miles south. An hour later, I'm riding an empty, tree-shaded one-laner through lush, quiet marshland. It's perfect, except for the gnats. They're everywhere. In shade and sun, mouth and nostrils. I put on sunglasses, and I wrap a bandanna around my face, and mostly, I ignore them.

For the rest of the day, I ride slow, stopping often to snack and snap pictures, and by the time I hit the outskirts of La Crosse, where I have vague plans to camp in a backyard, the sun is setting. I stop at a street corner, and as I'm staring at and thinking of exactly nothing, two locals--Susan and Scott--pull up on a tandem and ask where I'm headed. I tell them, and the book comes up, and it turns out Susan heard me on the Larry Meiller Show. Soon enough, she and Scott are inviting me to grab a beer, have a shower, stay the night in their home. And hours later, I'm lying on memory foam, under a velvety duvet, asking myself for the millionth time: "What, exactly, have I done to deserve this?" 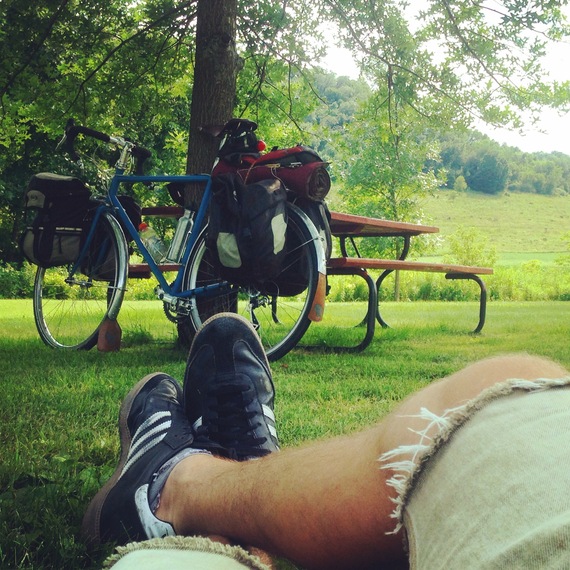 Susan makes me breakfast, and Scott insists on escorting me out of town. His route is quiet and pretty, and we have a nice little chat, and just before saying goodbye, he sets me up with a great ride for the rest of the day, involving four county roads, a bunch of Amish farms, and about 900 miles of climbing.

This last bit isn't Scott's fault. I'm the one who's chosen to ride straight through the Driftless Area, the one part of Wisconsin that never got steamrolled by glaciers. I've never been, but I've heard it's super hilly, and at least on a theoretical level, I get that riding this terrain on a seventy-pound bike-tank will be hard. But, wow--it really is. By midmorning, I'm sweating buckets, and by noon, I need a nap. I can't take a nap, though. Because gnats. Whenever I stop moving, they are in my ears, under my eyelids. I scream. I karate chop. But they are relentless. So I do the only thing I can: I ride, for eighty miles, over monster hills, with few interruptions.

Eventually, my muscles acclimate to overdrive, and I sit back and enjoy the thirty-mile views of handsome barns and rolling forest. The sky is darkening when I arrive at a hilltop home owned by distant cousins. They're out of town, but they've invited me to crash. So I do. I take a cold shower, shovel in what food I can find, and sleep for ten hours. 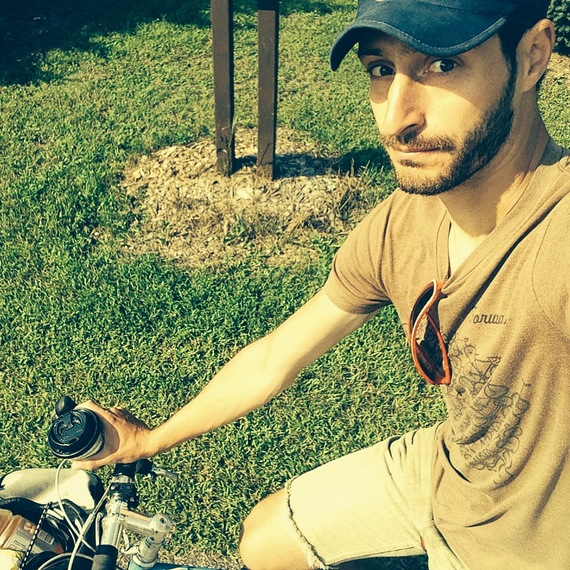 It's a slow morning. My eyeballs are sun-scorched. My legs are pumping pure molasses. I want to spend the day facedown on the couch, but in thirty hours, I need to be in Madison. So at the crack of ten, I get on the road. The ride starts real nice. The first four miles are downhill. The wind is with me. I eat a gas station breakfast, and then I slip onto a shady bike path, and it's delightful, so I celebrate by swapping my helmet for a baseball cap. I spend ten minutes getting a photo of myself riding while sipping coffee, and I post it, and two friends text to give me crap for being unsafe.

I put the helmet back on, which is good, because just past Spring Green, my head gets assaulted by what I later learn to be a redwing blackbird. Since nature now hates me, and the pretty paths have ended, and I'm back on busy highways, I keep on the helmet and drop my head and ride hard. By the time I've passed through exurbs and suburbs and into the city proper, I'm dehydrated and dizzy and disoriented. Which, given my old undergrad habits, is appropriate enough. 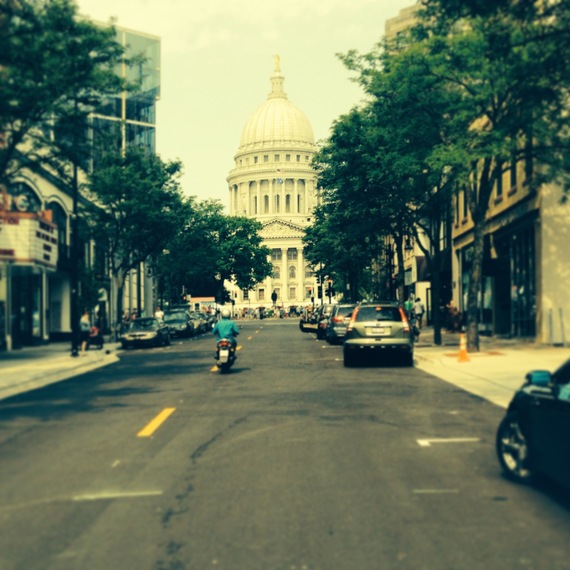 I'm in a pack of twenty-odd cyclists, riding side roads and bike paths toward Madison's Capital Square. We're approaching from the east, from the Atwood neighborhood, a neighborhood I rarely visited as an undergrad because I was too busy guzzling bad beer to venture more than a couple of miles from campus.

Yesterday, I rode through that campus. This morning, I visited the farmers market, the Terrace, my undergrad hotspots. And though I've still felt that familiar nagging regret--the sense I'm always missing what Madison really is and can be--today, I'm not paying it much attention. Because here I am, riding toward the places I once called home. I'm coming from a new neighborhood, with new friends. And I'm in the middle of this journey during which I've learned, over and again, how to find novelty in the familiar.

And so as I ride--as I take in this place, from this perspective--I tell myself that maybe I'm done with those regrets. Maybe the questions I asked were good, then. And maybe all of this going and coming, this coming and going, it's the only way to figure out what's good, now.