This is the true story of an unusual meeting that challenged my assumptions about love, marriage, and the task of photographing them both. I share this with permission from the couple whose story it is to tell. Details have been changed to protect their privacy.

Evan's realness draws you in, a little artsy, a little awkward. You could call our relationship business casual: work threw us together, shared interests kept us connected.

We hadn't even exchanged phone numbers, so when he texted me, he had to identify himself before asking, "Can we meet for coffee? I'd like to talk to you about something."

At the coffee shop, Evan gave me a big hug. He's one of those rare, good huggers; the kind of guy who hugs like he means it, but doesn't get creepy.

After a few minutes of small-talk, Evan drew a deep breath; I sat up a little straighter. Getting down to business.

"A few months ago," he began, "I reconnected with an old friend. A woman. We'd dated briefly several years ago, but it never went anywhere."

I nodded, muttered something encouraging.

He continued, "When Amy and I saw each other again... we just knew. We knew immediately that we had to be together." Evan was smiling, shy almost. He was... in love. "Thing is," he hesitated, "...she's married."

My breath caught. My thumb pressed my wedding ring sharply into my finger.

"Her marriage had been bad for a really long time," he quickly inserted. "Like, REALLY bad. He got violent when she broke it off. They're in the process of a divorce right now, but... it's pretty ugly."

I gulped my coffee, my head buzzing. A married woman, soon-to-be-divorced; and my friend, completely, undeniably in love.

"As soon as the divorce papers are signed, we're getting married. Like, just us, two witnesses, and an officiant." Pause. "And we want you to photograph our wedding."

As wedding discussions go, this one topped the charts in atypical. Usually I meet with a couple; usually we talk about things like timelines and budgets; usually neither of them is already married to someone else.

Yet as he spoke, Evan's eyes got brighter, and his voice grew warmer. "I've never been so sure of anything in my entire life. This is just... it. I adore her, I respect her, I learn from her, I love her. We have to get married as soon as we possibly can, because we are meant for each other."

He was bouncing one denim-clad knee up and down, change jostling in his pocket, but he looked me straight in the eyes.

A lifetime seemed to slip by during the next few seconds, as Evan's story filtered past years of my own hard-won happy marriage, a good Southern upbringing, roots well-soaked in convention and tradition.

I tried to envision the future for Evan and his Amy. The intensity of their relationship would lessen over time -- it always does. Maybe they would find themselves dissatisfied with one another once the dust had settled. Maybe Amy would realize that Evan was her excuse for leaving a broken marriage. Maybe Evan would discover that he had been drawn to the romance of Amy's story, a romance that would diminish once her clothes were taking up space in his closet.

But did it matter?

In meeting after meeting, with couple after couple, I hear clean, simple stories. But there, in that moment, right in front of me, sat Evan, inviting me to bear witness to a love story of unthinkable complexity. And I considered what it might mean to photograph this kind of love.

So I spoke from my heart, and I answered, "I would be honored."

Over and over I have photographed love. Love, rare and devastating. Love, shattering and necessary. Love, fleeting and forever. The timing may be imperfect; the setting may be all wrong; but when we find love, we can do nothing but throw ourselves into it with our whole hearts. It is a goal to achieve, a dream to fulfill. It is a bet we hope to win, but may lose.

Father Charlie Donahue described photographers as the writers of the longest homily: a blessing reaching far into the future, a gift not of the mind but the soul. If photographs could speak, I would conjure mine to tell Evan and Amy's story in all its pain and beauty and hopefulness, anchoring their family in love until the day they leave this world. Because maybe -- just maybe -- Evan and Amy will grow old together. Their chances are as good as mine, or yours.

When the legal proceedings were finally settled, Evan put on a suit, and Amy wore a dress, and they walked under the open sky to be married, with two witnesses, one officiant, and me -- their photographer. And a determination to love, against all the odds. 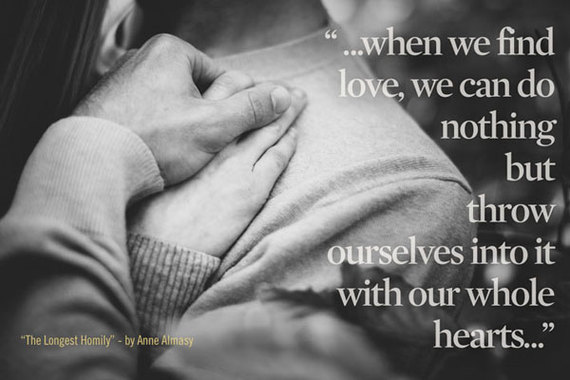 Find more of Anne Almasy's writing and photographs, including the original publication of this essay, on her website, www.annealmasy.com.