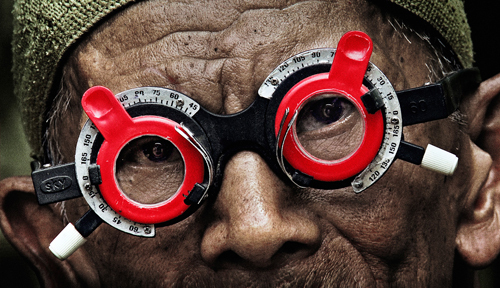 A scene from The Look of Silence. Courtesy, Drafthouse Films & Participant Media

Beginning in 1965, over one million people were murdered in Indonesia. This state-sponsored genocide was justified at the time as necessary to root out the communists. What filmmaker Joshua Oppenheimer uncovered in his Academy Award nominated first film on the subject, The Act of Killing, and now in his follow up film, The Look of Silence, is the dirty little secret that this was a cover story to justify a ruthless military take over of the country. A bloodbath the United States wittingly and unwittingly supported.

As he did in his first film, Oppenheimer goes to the sources of the tragedy, the killers, who are more than willing to tell him the who, what, when, where and how about the murders they committed. These perps don't try to hide their crimes, or claim temporary insanity or say they were just doing their duty against their will. Instead they proudly come clean in excruciating detail even acting out how throats were slit, prisoners beaten and tortured and bodies dumped.

In this case, Oppenheimer follows the struggle by one family, principally the youngest son, who goes looking for answers about how his older brother was murdered. This courageous act is not without peril in a country still controlled by the people who killed to get to the top.

What he finds out is a harrowing tale spun by cold-blooded murderers who show absolutely no remorse and spin tales that cast their heinous acts as heroic in a way unmatched by even the most psychotic mass murderers in contemporary history. Even some of the defendants at the Nuremberg trials expressed repentance.

The Nuremberg trials, or The International Military Tribunal, opened on November 19, 1945, with charges being levied against 24 major war criminals and seven organizations were indicted for conspiring to accomplish crimes against peace, War crimes and Crimes against humanity.

Nuremberg showed the world that crimes against humanity and war crimes can be successfully tried. Currently, cases like the Indonesian genocide would fall under the jurisdiction of the International Criminal Court (ICC) in The Hague. This court was established after the Post Cold War tribunals of the 1990s, the International Criminal Tribunal for the former Yugoslavia and for Rwanda, demonstrated a need for an independent, permanent criminal court.

But there is a catch to putting the Indonesian perpetrators in the dock at The Hague. The charter of the ICC generally only allows an investigation to begin after the referral from a State Party or from the United Nations Security Council.

The current President of Indonesia who has endorsed Oppenheimer's films is being called a communist by the "shadow government of the military," said Oppenheimer when I spoke to him this month about what can be done. Clearly, there are concerns about his health and safety if he were to proceed.

The other route, getting the UN Security Council to request an ICC investigation, would likely be blocked by the United States and Great Britain at this time, he explained because of those countries' complicity according to Oppenheimer.

Senator Tom Udall, (D, New Mexico) has authored a Sense of the Senate resolution encouraging the President to direct the United States Ambassador to the UN to make the request of the ICC. A Sense of the Senate Resolution doesn't create law but it can be a persuasive political tactic to raise awareness.

Which is what it takes in today's fractured and divisive political landscape. It's tough to get everybody's attention about anything meaningful.

Compounding the problems of general indifference and people just being busy, we're living in a time where the "balkanization of the media," as President Obama said on the Daily Show on July 21, 2015, has made it increasingly difficult to get the "big tough important issues done."

Films like The Look of Silence have become necessary to fill the void left by the abandonment by the networks of hour-long documentary specials, the pressure by the FCC to air news and public affairs programing in general and the collapse of the mass media that at one time helped to formulate public opinion and forge a shared common purpose.

To break through the media clutter that is also distracted like the dog in the film Up that became frozen every time someone said "squirrel" requires a concerted effort to engage people and get them to think about the tough decisions that have to be made.

Oppenheimer is working with Participant Media to develop an outreach and engagement strategy but he needs your help. A good way to start is to sign the petition supporting the Sense of the Senate Resolution.

The good news is that when people are engaged, eventually the political system responds in spite of the money, the lobbyists and fractured media landscape. It's time to turn up the volume and break the silence about the Indonesian genocide.