The U.S.-produced sitcom Gilligan's Island was one of the most popular programs in global television history -- but it has long been forgotten that the original theme song for the show was a calypso-styled composition sung by none other than kasionian "Sir Lancelot," a native of the twin-island republic of Trinidad and Tobago who later achieved considerable popularity in New York in the aftermath of the Harlem Renaissance.

The general premise of the television series (originally broadcast from 1964 to 1967) is well known: seven castaways from a tourist ship beached by a tropical storm -- including a bumbling first mate named Gilligan (played by Bob Denver) -- become marooned on a deserted island. They spend their days consumed by slapstick efforts to escape their fate.

Reruns of Gilligan's Island dominated late afternoon airwaves internationally for decades. It is the longest-running syndicated TV show in the annals of television and catapulted Gilligan into a global pop icon.

The teleplay for the original pilot, featuring a somewhat different cast of characters, was written in 1962 -- coming on the tail-end of the so-called "calypso craze" that swept the United States in the late 1950s. The theme song for the pilot, which never aired because of the significant changes in the cast and plot scenario, was a faux calypso ditty composed by the show's producer, Sherwood Schwartz, in a last-ditch attempt to secure network approval of the series:

Off Florida coast many hundred miles,
Is tropical sea full of tropic isles;
This is the place where tourists flock,
Renting boats at the busy dock...

Schwartz contracted with Lancelot Victor Pinard -- better known by his calypso sobriquet Sir Lancelot (pictured below)-- to record the original theme song (with some additional changes being made to the final lyrics). 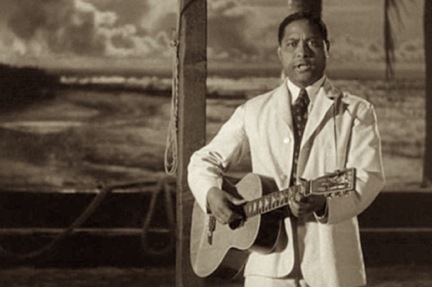 Born in the early 1900s to a prosperous family in Cumuto, just west of Sangre Grande in Central Trinidad, Pinard studied to become a pharmacist before embarking on a calypso career in New York City at the Village Vanguard nightclub.

Lancelot is credited with co-writing (and first recording) the calypso classic "Shame and Scandal" (originally entitled "Fort Holland" and then "Scandal in the Family"), which he performed in the painfully stereotypical film I Walked With a Zombie -- making it the first known calypso to ever appear on the big screen.

During the 1940s, Lancelot gained nationwide popularity in the United States and was known "as the hottest calypso singer in New York." In addition to his musical career, he also became an actor in Hollywood, playing bit parts in films (he had a cameo in the Bogart-Bacall classic To Have and Have Not) and U.S. television shows for a quarter-century.

Schwartz was banking that Lancelot's acclaim as a calypso singer and the lingering memory of Harry Belafonte's gold-record album "Calypso" would catapult the sitcom into production.

In a sense, it did. Schwartz got a green light from CBS to produce the pilot--but not for the entire series.

By the time production began on the first season of "Gilligan's Island," additional changes in the setting of the series--from the Caribbean to the South Pacific--rendered the calypso-influenced theme song performed by Lancelot geographically obsolete.

While Lancelot's version introduced the pilot entitled "Marooned," by the time the series hit the airwaves in the fall of 1964, an entirely new theme song, written in the tradition of American folk-rock music and sung by a relatively unknown trio called The Wellingtons, introduced each episode.

One can only wonder what would have happened had Lancelot's song survived the transition from pilot to the network series. It's possible that it might have extended the international calypso craze into another decade, and, perhaps longer. 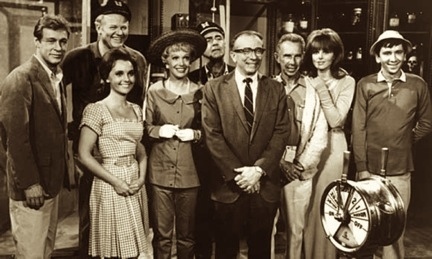 Gilligan's Island spawned two animated series, three TV movies and a 1992 stage musical, Gilligan: The Musical, for which Schwartz (pictured center in the above photo, with cast) and his collaborator son, Lloyd, wrote the book. Schwartz also created television's The Brady Bunch.

As for Sir Lancelot, he continued to act and perform in the United States, including a final farewell stint in the 1980s with the likes of Ry Cooder and Van Dyke Parks in Los Angeles. He died in Southern California in March of 2001, at the reported age of 98.

Writer and filmmaker Geoffrey Dunn's best-selling The Lies of Sarah Palin: The Untold Story Behind Her Relentless Quest for Power was published by Macmillan/St. Martin's in May of 2011. Dunn is also the co-producer and director of the award-winning film Calypso Dreams. He is currently working on the production of a short sequel. (An earlier version of this article appeared in the Trinidad Express. Special thanks to calypso historian George Maharaj.)