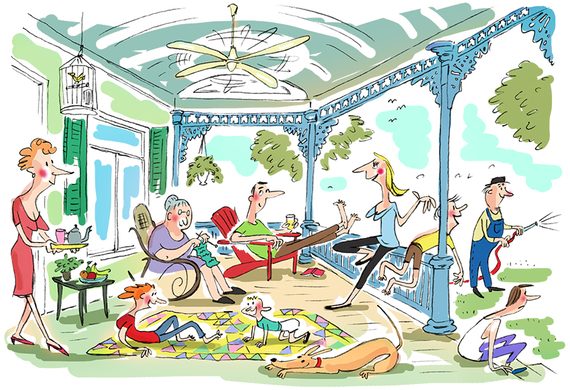 Summer in America is the coldest time of the year. Women in particular suffer from the chill that pervades the land. For me, this is a season of goosebumps, blue fingers and toes, and chattering teeth. I always have a scarf and sweater within arm's length. Places of extreme danger are movie theaters, offices, and any places frequented by men.

The culprit for this frigid affair? The absurdly low-tuned air conditioning. This appears to be a typical male thing, according to the New York Times, which notes that thermostats have been traditionally set for the comfort of men. But the female metabolism is better able to cope with the natural heat of the summer. Where I shiver in my sweater indoors, men wear T-shirts and shorts. An extreme case was President Richard Nixon, who revved up the air-conditioning to full blast so he could let the fireplaces in the White House crackle merrily away all summer.

The tyranny of air conditioning ruins not only the climate but also domestic tranquility. "Close the door!" my male housemates shout in unison when I walk outside, fearful that a summer breeze might somehow invade our artificially controlled climate. What once was once the simple pleasure of a warm day - made tolerable by open windows and doors -- is now a mortal sin. You cannot even open most windows at all. So disappeared the simple balm of a refreshing breeze on sweaty skin.

Air conditioning has also robbed Americans of a unique pleasure of summer evening: sitting outside on the porch. Virtually every American home once had such an amenity. Porches are cultural institutions that go back to the original Indian huts in the Caribbean.

Families came together on the veranda - itself a Faulknerian word -- relaxing languidly in the shade, maybe under a ceiling fan. Around six o'clock, after dinner, everyone congregated there. Grandparents nestled in the rocking chairs, parents spread their quilts and installed their children accordingly. Fathers watered the grass, chatting with the porch dwellers. Neighbors strolled by for a chat. At day's end, we made plans for tomorrow. On the porch we had time to plan for an interview, a book, a thought. All this accompanied by the chirping of crickets, the croaking of a frog, lit by twinkling fireflies in a starry sky.

Nowadays people don't even know what's outside in the summer. Builders have stopped putting porches on the street side of new houses. We no longer bask in each other's company but wallow in the impersonal coolness of air conditioning and cable TV, where the only talking is done by talking heads.

There are some efforts to open the doors. Thus, in the Florida instant community of Seaside, known from the Jim Carey movie, The Truman Show, porches were made mandatory. And perhaps the worries about global warming will return us to a peaceful coexistence between the indoors and the outdoors.

No one has better described the lost feeling of porches than James Agee in his prose-poem "Knoxville: Summer, 1915." Here is Agee recalling his memories as a 5-year-old about the endless summer evenings at his childhood home:

"Parents on porches: rock and rock. From damp strings morning glories hang their ancient faces. The dry and exalted noise of the locusts from all the air at once enchants my eardrums ...
"They are not talking much, and the talk is quiet, of nothing in particular, of nothing at all. The stars are wide and alive, they seem each like a smile of great sweetness, and they seem very near. All my people are larger bodies than mine... with voices gentle and meaningless like the voices of sleeping birds. One is an artist, he is living at home. One is a musician, she is living at home. One is my mother who is good to me. One is my father who is good to me. By some chance, here they are, all on this earth; and who shall ever tell the sorrow of being on this earth, lying, on quilts, on the grass, in a summer evening, among the sounds of the night. May God bless my people, my uncle, my aunt, my mother, my good father, oh, remember them kindly in their time of trouble; and in the hour of their taking away.

"After a little I am taken in and put to bed. Sleep, soft smiling, draws me unto her: and those receive me, who quietly treat me, as one familiar and well-beloved in that home: but will not, oh, will not, not now, not ever; but will not ever tell me who I am."