While we all love Shakespeare, how much must he have loved us to risk a cruel death by hiding a forbidden spiritual teaching in his plays?

As the 4 Centenary of Shakespeare's death draws to a close I'm wondering whether humanity has really changed over the past 400 years? Is there now more happiness, fulfilment and peace on our planet? If there is, it's hard to see.

We think we know more about things scientifically, but do we know more about ourselves spiritually? Do you? When you look into the mirror, who is it that looks back? Do you know - really know - who you are, and why you're here? Are you fulfilling - really fulfilling - your true purpose? Do you even care? If you honestly say 'yes' then you're in an astoundingly small minority.

Two years ago, while drafting a new book about my work as a 'soul-centred' coach, I was astonished and humbled by coming upon incontrovertible evidence that William Shakespeare was probably far, far more than simply 'the bard of Stratford'!

Clearly, he had risked his life to bring us the virtually unknown, dangerously forbidden, spiritual teaching of the ancient masters, known currently in some circles as the Yoga of The Sound Current or Surat Shabdh.

In the book the original draft became, Shakespeare's Revelation, I have shown how, woven, as if with invisible silk thread, into the verse, names and plot-lines of his well-known tales, is a sublimely subliminal spiritual teaching. Had this been spotted in his day, he would have suffered the direst consequences - and his works of genius, like the Cathars, burned at the stake - along with his screaming body!

Still today we must always beware the ways The Establishment continuously undermines true progress towards self-realisation. The Establishment that never wants us to know, let alone follow, any version of truth but their own.

My personal celebration of Shakespeare's centenary is to sing his praises as a spiritual master up there with Jesus Christ, Moses, Buddha, Mohamed, Krishna, and Lao Tzu and the other spiritual masters.

What I found - in every play

Advertisement
In order to be absolutely certain I was not projecting patterns that were not in the texts, I looked very closely indeed into about a dozen plays. I organised them into three 'biblical' parts (because that's what Shakespeare seems to do):

Had I observed, say, one pattern appearing once in one play, I'd not have had any kind of corroboration for my thesis. But I didn't. The patterns I shall now relate occur multiple times in every play I looked at. There is a perfect consistency and congruity of this teaching running through the entire oeuvre. You can ignore it, deny it, sneer at it, mock me, but in all honesty, this case is as close as you could get to 'proof'.

I'm reluctant to try to precis this, because the full, jaw-dropping impact only comes from the accumulation of hundreds of instances and by following the thread through the book. But, in a nutshell, there are at least three intertwined elements hidden in the plays. When looking at the complete works holistically, the 37 individual plays become 37 retellings of one primary spiritual allegory. By using external historical and fictional characters as proxies, he is telling the allegory of how our internal consciousness has evolved. How the true soul of man (Adam) was deposed and banished by Satan (Night). The warring tyrants Cain and Abel set up as 'false selves' to rule our inner kingdom as pretenders. And, after some time, a spiritual warrior came to vanquish the tyrant and restore our soul once again to rule our own inner consciousness.

This allegory has the ring of 'Christianity' to it - but it is ironically far closer to the pure Hindu teachings of the Sikhs and Sant Mat! It is, in fact, a teaching that enables all of us to reclaim our true spiritual heritage and fulfil our ultimate destiny. Each play is a profound spiritual discourse of exquisite value.

In every play, depending what aspect of the allegory he is emphasising, you'll find:

Very briefly, the archetypes of our inner kingdom - fully elucidated in the book - are referred to by Shakespeare as God-Satan (Day-Night/Shadow); Adam-Eve (Male-female polarities of the soul); and Cain-Abel (Good-Evil aspects of our mortal mind).

The concept of the Sound Current is a difficult one for the western mind to even accept as all mention of it has been purged from our language and thought by thousands of years of religious tyranny.

As told by the masters, The Sound Current is God's divine instrument of Creation. In John's Gospel, it is called 'The Word', In Genesis it is called 'the waters', in Revelation 'the voice of many waters and the voice of a great thunder' by the Sikhs as 'the Surat Shabdh', the Sufis as 'the wind invisible' . It is also known as the 'music of the spheres', the 'Tree of Life', the 'wind from heaven' and, by Shakespeare - The Tempest!

What I have (arbitrarily) called 'Christ Motifs' are hundreds of subtle inferences to the way Jesus Christ fulfilled the Old Testament prophesies in order to liberate the soul from Satan's law. When you attune to these, it's exquisite how they pop up everywhere in every play.

You really do need to read the entire book to get the full impact. But as a wee taster let's unwrap a small piece of, say, Othello. 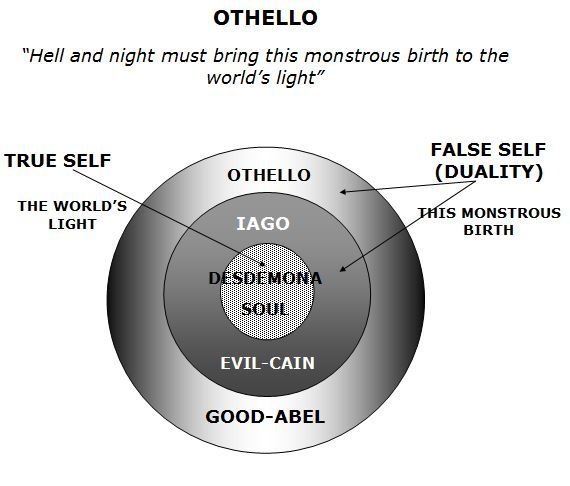 The 3 archetypes are represented in Othello by 'divine Desdemona' as the Soul/ true self, Iago as the Cain false self and Othello as the Abel false self. The play mirrors the biblical story of how Cain murders his brother Abel who he sees as more worthy than he of God's love.

In our play, Iago (From the name Jacob meaning 'supplanter') 'supplants' Othello's will (inner kingdom) and lures him into the murder of his beloved, innocent Desdemona - who seems to 'resurrect' momentarily - long enough to forgive Othello for his sin.

One important cryptic clue to Shakespeare's deeper intention is hidden in this line of verse given at the moment Iago engenders his evil plan:

"I ha' it. It is engendered. Hell and Night must bring this monstrous birth to the world's light."

What if this is Shakespeare's genius dramatising the very instant 'Satan' hatched his plan to supplant the soul of mankind and rule our inner world in God's place?

The Sound Current is sometimes described as haunting music, sometimes as winds, rain, thunder, lightning, waters, floods, and tempests. On the dangerous sea journey from Venice to Cyprus, Othello (Abel) is ravaged by a tempest. Desdemona (Soul), in contrast, is protected and taken home safely on the waters.

"Ha's had most favourable and happy speed: tempests themselves, high seas, and howling winds, the gutter'd rocks and congregated sands, as having sense of beauty, do omit their mortal natures, letting go safely by - THE DIVINE DESDEMONA."

Apart from the death, 'resurrection', and forgiveness given by the divine Desdemona, an earlier scene where she is discussing the temptation of infidelity with her servant Emilia is another cryptic Christ Motif. This passage from Act 4, Scene 3, is a pastiche of Christ's temptation in the wilderness when Satan offers him 'all the world' if he would worship him.

Desdemona asks Emilia (as did the devil ask Christ) if she would be unfaithful even if the reward were 'all the world'. Emelia says, yes, she would, and tries to tempt Desdemona into betraying her word, her integrity. But Desdemona (even for all the world) would not.

"Beshrew me, if I should do such a wrong for all the world."

The book makes it all clear

This snippet is hardly convincing enough to shake the lifelong paradigm through which we've perceived not only Shakespeare but the Bible and religious dogma. But if you invest some time following the unfolding revelations in the book I think it could change your life - in a very good way.

Why did Shakespeare risk his life in this way? What manner of man was he really, to have known so much about the Sound Current of all things, in seventeenth century England, of all places?

If this material is important to you:

Buy the book now - and join the conversation

Get a free sample chapter or eBook