In the Toy Story films, the primary personal relationship on display is friendship. And yet, although the films are not romances, there are more realistic representations of romantic love threaded through the three movies than you'll find in a multiplex full of romantic comedies.

Here are some examples of love -- and loss -- in the Toy Story trilogy:

Fidelity Counts: When Toy Story ends, Woody is in a relationship with Bo Peep. When Toy Story 2 starts, he's still in the same relationship. That's not the way it happens in a typical sequel. Usually, the guy gets the girl at the end of the movie and they live happily ever after... until the next movie where he starts the process all over again with a new girl. The love the hero has for any of the women he's paired off with is trivialized when the producers care more about the "story arc" of him pursuing and winning her than they do about him being with her.

People Are Not Prizes to Be Won: In Toy Story 2, Woody meets another western-themed toy. A girl toy. And yet, he doesn't ever look at her as a romantic rival to Bo Peep. And Jessie doesn't look at him that way, either. Movies instinctively want to pair people up. People are presented as being incomplete unless they find love at the end of the story even if their character's quest has nothing to do with finding love. When a romance is tacked onto the end of the movie, it always feels to me like it cheapens love. ("Good job defeating the alien invasion force, Lieutenant. Here's a medal of honor and a pretty girl to kiss.") Despite what you learned in When Harry Met Sally, men and women can be friends.

Girls Can Ogle Too: Okay, yes... in the coda to Toy Story 2 Jessie does go after Buzz. But it doesn't bother me here for three reasons. First, it's a good matching of personalities. Second, Buzz isn't treated as a prize. He's a fully drawn character who by that point has already starred in two movies. Typically, the person being grabbed up was written for the sole purpose of giving the other character a romantic interest. Here both parties are fully realized characters. Finally, this time around, it's the girl who's in charge. And she doesn't futz around neurotically. She sees Buzz, she knows what she wants, and she knows she's got him wrapped around her finger. That's not the way it happens in movies (particularly in ones where the romance is tacked on at the end.) 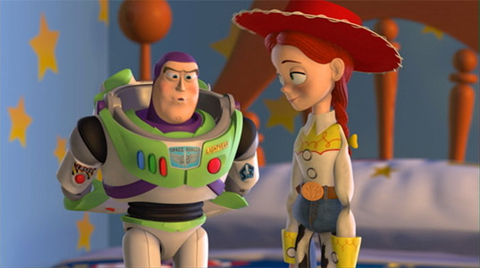 There's A Difference Between Infatuation and Love: In Toy Story 3, it's love at first sight when Ken and Barbie meet. They were, after all, made for each other. But that's not true love. It's infatuation. Or, if it's love, it's young love. It's not built on anything solid. But watch what happens toward the end of the movie. They've come to know each other better. They know that the other person isn't always nice. They know that the other person doesn't always talk in sickly-sweet tones. Ken learns that his love is sincere. He doesn't want some other Barbie... he wants THIS Barbie. And he earns Barbie's respect. That's a stronger foundation than they had when they started. They've got something more to go on other than their inherent need to love somebody.

Sometimes Loves Just Works: Mr. Potato Head and Mrs. Potato Head are both sort of cranky with each other, and yet their relationship works that way. They may have a caustic tone, but the love is still real. We all know real people like that.

Love Isn't Obligatory: Some of the characters make it through the trilogy without ever finding a love interest. The implication of most movies that true love is inevitable tends to diminishes the fact that love is special. It's something that you're lucky to find. It's not a guarantee. Yes, it's sad that the Hamms and Slinky Dogs of the world have no partners, but it's refreshing that the movies don't pity them. The characters seem to be happy on their own.

But perhaps that's just because they don't know what they're missing. Speaking of which...

Sometimes The People You Love Are Taken Away: As a widower, this is the part of the series that really strikes me. There's so much happening in Toy Story 3 that you may forget that Woody tells us that Bo Peep is... gone. But even though Woody doesn't speak of it again, you can tell from his face that he won't ever forget what happened.

Bo Peep was never a fully developed character in the trilogy, so you probably don't feel any sense of loss. But she was real to Woody in the life they had off screen.

There are plenty of romantic comedies that start by introducing you to a widower. (Cute kids are optional.) These rom-coms are never really about exploring grief--they're just using it as a manipulative plot device. They're telling the viewer that the man is already worthy of love. (All he needs is the right woman to teach him that he can love again!) It's a shameful use of cinematic shorthand.

Toy Story 3 doesn't do that. Bo Peep was probably taken away many years ago, but Woody isn't looking for a replacement. The filmmakers aren't giving him one, either. There are female toys in his world, but there's nothing to suggest that Dolly will ever be anything other than a new friend. Pixar respects their characters too much to make them go through obligatory plot points. Other filmmakers would say that a love interest for the hero would make the ending happier. Pixar isn't other filmmakers. 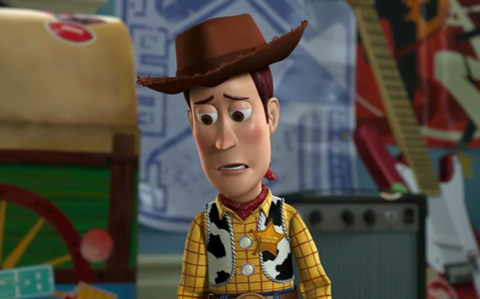 Love Stays With You Through Thick and Thin: I have a pet peeve about the standard Boy Meets Girl, Boy Loses Girl, Boy Gets Girl plot line. The Boy Loses Girl part always feels so forced. Either he makes an implausible mistake, or else there's an implausible misunderstanding. What's wrong with just letting boy and girl get each other and then having them go off to face the world together as a team? That's the way real love goes.

And that's the way it works in Toy Story 3. The Jessie/Buzz relationship has a roadblock when Buzz gets reprogrammed in the middle of the movie. But it's not a misunderstanding. At the end of the movie, he doesn't have to explain to her that it wasn't his fault. Jessie knows what's going on the whole time. She can't be romantic with the demo-mode version of Buzz, but she doesn't turn her back on him, either. She fights with her friends to get the real Buzz back.

People don't get reprogrammed like toys. But they do go through hardships. They do get sick--sometimes to the point of losing their old personality and identity. In the face of all of that, real love doesn't leave. 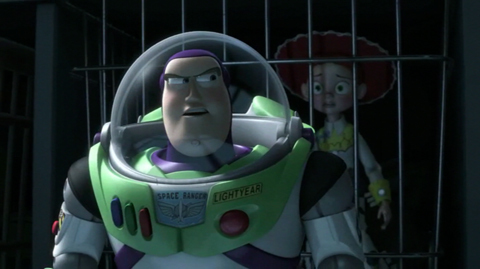