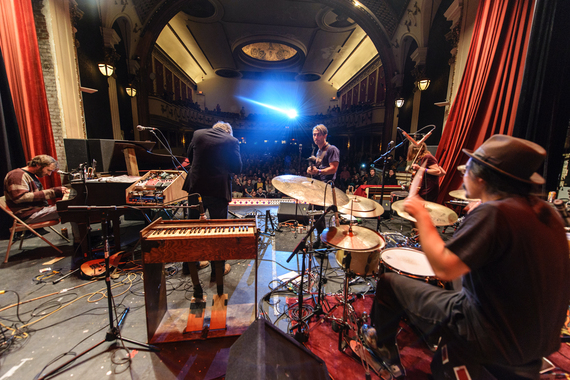 One year ago, the Columbus Theatre in Providence, Rhode Island's Federal Hill reopened its doors after three years of renovation and community assistance. Internationally acclaimed band The Low Anthem was one of the main names behind the venue's re-launch, hosting a night of music coined as the "Revival." On Saturday, November 16, the Providence music community celebrated the one-year anniversary of the theater with a second "Revival" show to raise funds for the venue's new sound system.

Organized by The Low Anthem and the Columbus staff, the eight-hour night of music featured three stages and handfuls of local acts and friends of the band's, including The Felice Brothers, Happiness (members of Deer Tick and Ravi Shavi), Roz and the Rice Cakes, Anais Mitchell, Arc Iris (former Low Anthem musician Jocie Adams), Pixels (fronted by new Low Anthem member Andy Davis), and many others. "Welcome to our home!" Low Anthem member Jeff Prystowsky said as he greeted guests with a wide smile at the venue's merchandise table.

Bryan Minto, Columbus Theatre co-operative member and musician for The Low Anthem and Diamond Rugs, sees the theater as having a major role in the community:

It's not so much that the Columbus simply met its code requirements and was able to open its doors again, as it is that it has reopened with its new direction and mission: providing the City of Providence and beyond with solid, quality live music produced from top to bottom with the hearts and passion of a core group of folks, the Columbus Co-Operative.

The Low Anthem has crafted a close-knit community around the 87-year-old theater since its reopening, even building a studio in the upstairs of the venue where they record their own music as well as local talent.

The studio work has evolved into a record label of sorts, called the Columbus Recording Company. "From studio to storefront all of this is made possible by neighbors," reads the company's Facebook page. According to The Low Anthem's Ben Knox Miller, the Columbus Recording Company has a network of 20-some local shops around Providence that sell the theater's recordings.

The band's devotion to Providence is no new news; the band has deep roots within its hometown. Prystowsky and Miller studied at Brown University together and worked at the college radio station WBRU before forming the band in 2006. Seven years later now, the band could move to a bigger city in exchange for more potential industry connections, but it's never been a prospect for them.

At Saturday's show, the fruits of their labor were front and center for Providence music fans, who filled the theater and its lobby until the end of the night. Each band brought a different style and energy to the show, all supporting the same purpose. Some of the bands, like Roz and the Rice Cakes, have close ties with the theater and its staff.

"Ben and Jeff [from The Low Anthem] have been good friends since we started as a band and they have been such a help in producing our new record. Playing the second Revival was an honor, so many great bands -- we're honored to be in such good company," said Roz Raskin of Roz and the Rice Cakes, who are currently mixing their forthcoming album that they recorded at the theater.

Forthcoming Columbus Theatre calendar highlights include Bombino, Black Pus and XYLOURIS WHITE (Jim White of The Dirty Three with George Xylouris), Mother Falcon and Charles Bradley. The Low Anthem is currently working on its fourth studio album for which the release date is pending.