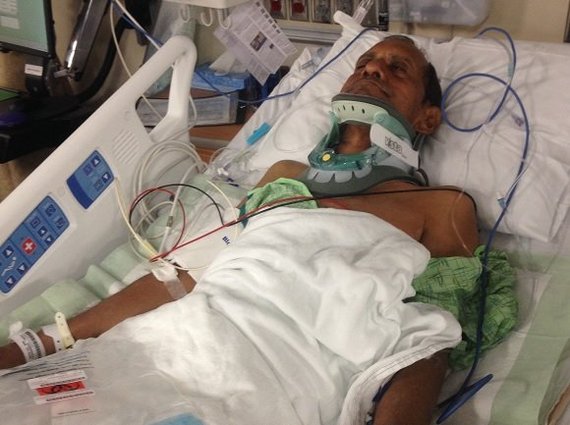 The video is horrific. Madison, Alabama police officer Eric Parker slammed Sureshbhai Patel into the ground hard enough to paralyze him. There was a time when lynchings were carried out by mobs. Now, we have created a much more formal process of carrying out violence against oppressed and marginalized people. Badges and uniforms are handed out so that those we place in authority can intimidate and repress those that we think are less worthy of life. The temptation is to say that Eric Parker is an animal and dismiss the entire situation. The truth is that Eric Parker was simply doing what we paid him to do.

The dirty secret about the attack on Sureshbhai Patel is that a homeowner called in and reported him as, "...a skinny black guy, he's got a toboggan on, he's really skinny." There was also an ominous report that he was getting close to a garage. The police showed up quickly for "a skinny black guy" in a white neighborhood close to a garage. These are racist thoughts perpetuated in white neighborhoods around our nation every day. The police first thought they were going after a black man.

Upon arrival, Officer Parker realized Patel did not speak English. Instead of having patience, Officer Parker grew more aggressive. How many times does this same situation play out over and over again throughout our nation? People who are unable to understand and speak English are treated like shit. What makes us think that our language is superior to every other language on earth? The truth of the matter is that the only language that our whole nation is fluent in is the language of violence and oppression. Officer Parker simply played out the way that we treat immigrants all the time...we push them around, treat them with suspicion and tell them to go home. What began as racism, turned into xenophobia and ended up in a crime of hate.

Ever since I heard about the story, I have not stopped praying for Sureshbhai Patel. When I told a religious friend of mine how concerned I was about this story, I was chastised, "If he is Hindu, then you need to first and foremost pray for his salvation." Who the hell is going to pray for our salvation? We are an evil, intolerant and oppressive people in desperate need of an antidote. The first step of recovery is admitting you have a problem. For the love of God, can we please stop and admit that we need help?