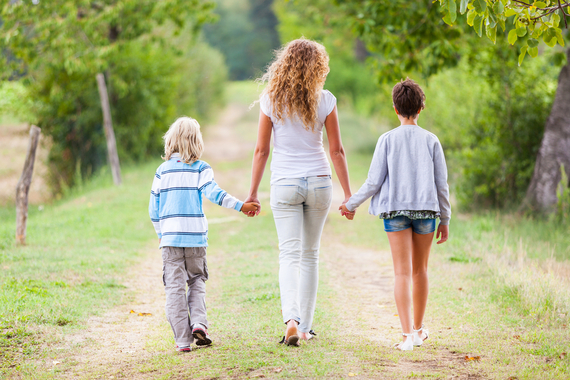 The tangled web we humans weave has emotional tentacles far more entwined than an octopus. The statistics on child sexual abuse are overwhelming. One in three girls molested by age 18. One in five boys. The median age for molestation is 11-13. Eighty-five percent of molesters are family members or known to them. How are we going to address this with any degree of success? What can one person do?

The madness stops here. I prevented my two children from experiencing sexual abuse. They will protect their children. Imagine the ripple effect when a woman, or man, understands they are not isolated by experience. They can name it, stand straight and tall about it, and grow this human shield we need to form, to surround our children.

There's a wonderful "sound bite" in an otherwise difficult story of reporter Lara Logan's sexual and physical assault by a mob in Cairo. She was sure she was going to die. And then one woman put her arms around Lara, and silently, burka clothed women formed a barrier between her and the mob. "It was about their women and that was what saved me, I think...the women kind of closed ranks around me." That's what we need to do for our children. Close ranks around them, and save them from abuse.

Our culture still harbors a taboo about child sexual abuse. Those of us who were harmed by abuse belong to a secret society held hostage by shame so profound we can't utter a word of our experience. People avert their eyes when incest is mentioned - in the 21st Century! Astonishing. And yet, that was me. I chose not to speak of it even after I did the work of healing, for over 30 years.

I didn't want to be defined by my childhood. More, I didn't want my children to experience any more "splash-over" toxicity from the legal process of protecting them from my abuser. It was ugly.

Abusers are masterful manipulators. They don't play fair. Not with their victims, and not when about to be exposed. The fury they unleashed on me was stunning in its velocity, scope and their willingness to destroy. You have to be single minded, laser focused, and develop a will of steel, to be the one who says on behalf of his or her child...The Madness Stops Here.

Laura Landgraf is an author, activist, speaker and survivor. Laura would love to hear from you at: www.lauralandgraf.com

More:
healthy livingwomens issuesempowermentParenting Women
Newsletter Sign Up
The Morning Email
Wake up to the day's most important news.
Successfully Subscribed!
Realness delivered to your inbox

Author, Activist, Survivor - If I can do it, so can you! Resilience after trauma.