"Jeez, Laura. I thought you were afraid of heights!" my husband, Glen, said in a rainforest preserve in Costa Rica's South Pacific zone.

A panic came over me. "I totally forgot!" I thought as I looked down at the rainforest floor passing rapidly, far beneath me. 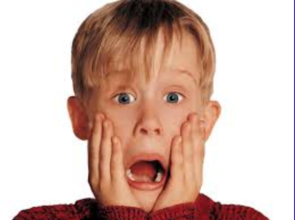 Then, the comedy of the matter suddenly occurred to me. For a moment, I actually wanted to be afraid of heights. After all, it had been part of my identity for so long! But there was no way I could deny that I had done something that normally would have terrified me without a second thought.

I landed both feet on the platform that was attached to a tree and unhooked myself. "I don't know," I said to Glen. "It was all so beautiful, I guess I forgot!"

But in hindsight, it wasn't the beauty that cracked my acrophobia. Glen and I had more than ample time to remember my fear of heights. We had driven to the zip line site, listened to the safety lecture, hiked into the rainforest, and traversed it three times in the air before either of us remembered.

That day in the rainforest has been instrumental in dealing with all my fear.

My acrophobia hit me suddenly on a fall day in Pennsylvania. I had spent the first 19 years of my life cliff diving in Hawaii where I was raised, going on roller coasters, and braving Ferris wheels. Then I went on the roof to help my father clean leaves out of the gutters. I climbed the ladder as I always would without a second thought and even walked the roof for several minutes. I looked at the ground, and suddenly, panic consumed me -- both a genuine brand new fear of heights and a terrified wonder of how something so debilitating had taken hold of me out of the blue.

What combination of events and thoughts led to that day, I have no idea. Had I had a dream, seen a movie, or heard a story about something horrible that happened to someone from high above the ground that I didn't remember? Maybe. But for sure, my inner dumb#ss (a term Glen and I use both seriously and in jest to describe the gremlin inside us creating self-defeating and limiting thoughts which become part of our identity) had something to work with. From then on, I thought of myself as a person who was afraid of heights.

Fast-forward 16 years. Glen and I had chucked our corporate jobs and moved to the Costa Rican jungle. We lived in a tiny seaside village with a very shaky water supply, venomous snakes, and fairly unkempt dirt roads. We had intentionally thrown our lives upside down, some -- including us -- would argue, in haste. Everything was different. Everything had changed. We were dealing with new, greater challenges than we ever had before

And during that radical sabbatical, we learned that every fear is relative. 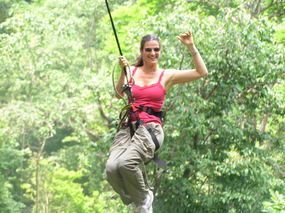 For instance, a person on the verge of bankruptcy, terrified of uncertainties that lie ahead, could take a walk, get held up at gunpoint, and suddenly bankruptcy becomes a fleeting memory in that moment.

We were dealing with so much in Costa Rica -- recalibrating our identities, our fulfillment centers, and the roles we played in our marriage. The intensity was palpable during those initial months of adjustment. Even hurtling through the air on a wheel suspended from a cable, the laws of relativity made it such that I no longer had room in my life for fearing heights. I was too busy encountering and dealing with the unexpected on a day-to-day basis -- and growing!

This important law is not often spoken of -- once we make radical changes in our lives, many of the old fears and problems we had are magically resolved.

After all, whatever we focus our attention upon grows in our lives. In the midst of radical change, we were too busy for many of the fears and problems that we had for so long. This is a conquering of the inner dumb#ss of the past.

We, personally, left many fears in the jungle, often through little or no conscious effort. What's more, we came home with the realization that if we could survive in the jungle, we could endure anything. Our tolerance for turmoil was leaps and bounds bigger than before.

So now your added incentive to start a radical life leap is that if you do what you fear most now, you will overcome what you feared in the past.

On Your Mark. Get Set. Magic!

Just start. If you want to move to a far-off land and are too scared, buy a ticket to go visit there. If you want to quit an addiction, write a contract with yourself about what you will do to quit, and sign it. Want to start a business? Go to the bank to open and fund an account. 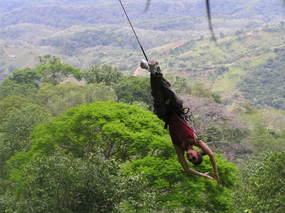 Once you do, you'll see that you will be overcome with fearlessness in the face of things that used to stop you in your tracks. I didn't realize that on zip line number seven when I inverted my body and saw the world passing below me in reverse, but I sure do know it now.