The customer, dressed in whites, looks flustered as she stares at the menu on the "NY Dosa" cart at Manhattan's Washington Square Park. She asks the man behind the cart details about his dosa's ingredients.

"Rice and lentils, only," he explains. She isn't convinced and asks again.

"All vegan, just rice and lentils," he assures her. Hesitant but now a little more satisfied, she gets her dosa packed.

"That lady," he points to her as she leaves. "She's Jewish-American, you know. I've seen her before. It's for Yom Kippur."

It was Rosh Hashanah actually, but that's not the point. Serving a long line of hungry customers at a busy square in downtown Manhattan, Thirukumar Kandasamy, it would seem, knows his constituency. Nobody knows him by that name though.

"I don't care how people refer to me," he says, laughing. "The news guys, they call me Thiru 'The Dosa Man' Kumar!" Then, a little Shakespearan touch.

"For some people, name's a big thing," he reflects. "I am always happy. Nothing's too big a problem." 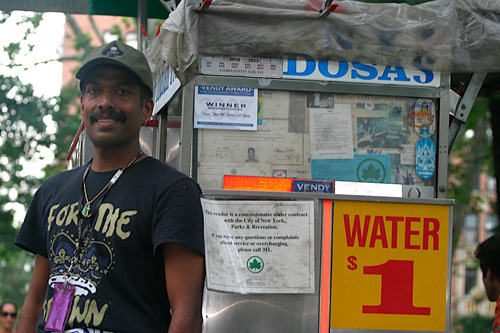 Every morning, Thiru starts work at 5 a.m., preparing food for the day at a kitchen in Queens. He hitches his cart to his roomy 1986 black Chevy, drives across the Queensboro Bridge to Manhattan and sets up by 11 a.m. at Washington Square. "I completely rebuilt it myself," he says, pointing to his truck (Thiru used to race and rebuild motorcycles). The sign, "NY Vegan Dosas - Price Range Inexpensive", is painted on the Chevy's rear, along with subway directions to his location.

Facing New York University's quaint law school building, Thiru's cart is an icon in this leafy neighborhood. It is frequented by artists, hipsters, students, dogs and their owners, tourists walking off the beaten path, and shutterbugs taking photos of the park's giant squirrels. The cart is a crowd-puller in itself, embellished with a "Little Vegan Monsters" sticker, a label guaranteeing "No Transfat, No Dairy Products, No Animal Products," and at least 30 articles about him from around the world. A movie poster cutout of Kamal Hassan herding a cow is mounted on the side.

And then, there's Thiru and his food. Before he scoops up a cup of batter to make the crisp, thin 'rice and lentil crepes,' he leans over his pushcart to check the number of unsold bottles of water. Then, in a swift motion, he simultaneously pours the batter into a frying pan, spreads it evenly with the cup in his right hand, sprinkles olive oil from a bottle in his left hand, and shouts, "Doll-uh, doll-uh, cold wat-uh."

That's water for a dollar. In reality then, Thiru never really markets his dosas.

"Lots of water left," he tells his new assistant, Maguba. "You set it up?"

"Yea, I did," replies the young girl with soft eastern European accent.

"Then why didn't you push it on the side?" he asks, pointing out that she should have sold a bottle to everyone who bought food. "Gotta be fast, fast!" 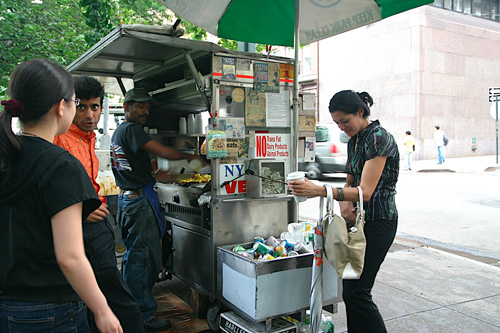 Thiru doesn't really need to market his dosas anymore. After being a finalist for two years, he won the 2007 Vendy Award for Best Street Cart Vendor in New York City. He's been covered by Time Out New York and has appeared on Oprah Winfrey's website. A regular wrote a Rastafarian song about him titled 'Dosa Man.' Another designed an "NY DOSA" T-shirt, and Thiru markets those too, along with his water, for about $15 each. Tourists bearing stories about him from East Asian publications pose with him for photographs. Thiru, a 40-year-old first generation Sri Lankan-American, is a star in his own inimitable way.

He sports a thick moustache, a beige cap with an 'Om' stitched on it, and a wide smile. He wears a gold chain around his neck, a silver-tinged earring in one ear, and a weathered green apron over his black jeans. And he chats up everyone. "He takes time to chat with each customer," says V.V. Ganeshananthan, an author who recently had Thiru cater the book party for her new novel.

Thiru's dosa lunches cost $6 at the most (a lunch elsewhere in that part of Manhattan will probably cost around $10). By using olive oil and avoiding any milk products, he an lay claim to the healthiest dosas around. By selling them on a street corner in an area of Manhattan known to be favorable to experimentation, he also guarantees himself a market and distinguishes himself from every other Indian restaurant in the city.

Two other recent and unrelated events seem to favor Thiru and vendors like him. The economic recession hit everyone, either directly or psychologically. "The recession is making people cook more," said Ruth Reichl, the editor of Gourmet magazine, speaking in March this year to a group of students at Columbia University's journalism school. Reichl was also convinced that the American market was going to see a change in food trends. The magazine's March issue had a Korean food spread, and Reichl felt the success of movies like Slumdog Millionaire meant that Indian food would be one of the upcoming trends, to the extent that one believes in them.

The apparent hunger for all things South Asian and the economic recession's ripple effects that tempts people to realize again the value of cheaper food both come at the beginning of another New York summer. Locals flock to the parks, tourists flock to New York. The stars seem to be aligned for South Asian street food in New York.

In the gridlock of graduate students, bankers and entrepreneurs in downtown Manhattan, Thiru stands alone as a street entrepreneur, an immigrant who started with little and redefined success in the restaurant business.

Thiru arrived in New York City in 1995 via the green card lottery -- the U.S. offers 50,000 visas annually to individuals from underrepresented countries. "I applied on a whim," he says, in Tamil. "The future wasn't great in Sri Lanka for me."

He had many jobs in Sri Lanka, including being a diving instructor and working at a travel agency in Colombo. In New York City, Thiru worked a series of jobs, in construction, at a gas station, an iron factory, and then finally, a restaurant. After a lengthy wait for a city vendor license, he set up his dosa cart in 2001.

Krishnaraj Kaviraj Das, a yoga teacher, has visited Thiru's cart since he started seven years ago. "I just didn't find his taste and texture replicated elsewhere," he says. Thiru makes Das a special large dosa and lets him decide how much he should pay for his food. He cuts special deals with other old friends like Kostain, an artist. "I help him set up the stall," says Kostain, "and in return, he gives me food for free."

It hasn't been an easy business for Thiru either. While carts have lower overheads than restaurants, city approval can take three to five years. Thiru estimates that operating his 25 square-feet cart costs as much as $24,000 per year, including licenses, taxes and running expenses. While he does not disclose how much he makes annually, his food remains relatively inexpensive and he is the only earning member in his family. "I have no margins," he says. "I have only once increased my dosa price by $1 over the last seven years."

The city laws are stricter for street vendors than restaurants. "A restaurant that puts up its sign on the sidewalk may be fined a maximum of $100," says Sean Basinski, founder of the Street Vendor Project, organizer for the Vendy Awards. "But a vendor who obstructs a path may be fined $1,000."

But the unfavorable vendor laws don't tempt Thiru to operate a dosa restaurant instead. "Nothing unique about a dosa restaurant," he retorts. "Vegan dosa cart, I'm the only one in the U.S."

It is a pride that manifests itself when he talks about his daughter, who started freshman year at Columbia University this month. "Hard work pays off," he says, adding that he intends to write a book in 2010 on his story.

It is nearing the end of another busy weekday afternoon. "We have only masala dosa and plain dosa left," he tells an approaching customer.

"Sure thing. I'm going to add the roti inside the dosa too, O.K.?" He mashes the potato-filled roti appetizer and spreads it within a plain dosa. An unsold appetizer and an unwanted dosa morph into something that leaves both of them happy.

How does he gauge how much to cook, day after day?

"According to the weather, man. Today's a rainy day, Saturday, no events around here. I bring only one tray of samosas."

The next how brings up a smile on his face. "I've been doing this for seven years," he says.

At 4 p.m., Thiru has his own first bite for the day. "Talk to me, girl. This is New York," he tells Maguba. He laughs out loud. His food is sold out.

He gets up to clean the cart, and wipes off his running nose, sniffling intermittently in the drizzle. "I didn't wear jacket while cooking," he says. "Got wet in the rain." His black ski pants keep him dry waist down.

"Ready , ready, quick," he says to Maguba, pointing at the cart's metal surface. "Yesterday I did everything, you weren't there. You got to wash it today. You didn't clean underneath."

"Did you clean the door?"

"No, inside. Gimme, gimme. I'll clean outside."

Thiru and Maguba put all the empty containers on the truck. He drives the truck up to the curb, attaches his cart to the hitch on the rear bumper, and gets in, ready to drive, while Maguba covers the boxes with a tarp and jumps onto the passenger seat. Loud Tamil hip-hop blares from the open windows. Thiru looks at his gas tank.

"Tomorrow got to do gas," he says. He smiles as he pulls away onto the road once more, to get groceries for the next day. "Today's O.K. Fast, fast, faaaast!"