It takes about 16 hours by bus to travel from Austin, Texas, to San Miguel de Allende, a city and a municipality located in the far eastern part of the state of Guanajuato in central Mexico. My boyfriend thought it would be a great idea for us to take the bus there. Initially, he told me it would only be a 12-hour ride. And then he backtracked as we got on the bus.

"It could be 16 hours if there is heavy traffic or some other unforeseeable circumstances," he casually told me.

It took 18 hours but I didn't know the difference. The only time I woke up was at the border crossing when I had to show the Mexican officials my passport. It was 10:30 pm. I left the office and went back to the bus, stretched my legs across the aisle to the opposite seat and fell fast asleep again only to be awakened at intervals with passengers crawling or hitting my legs as they tried to get to the bathroom at the back of the bus.

We arrived 18 hours later at the Transportes San Miguel above the city at the old mall called "Mega." My boyfriend told me we were an extra 2 hours in transit due to construction. At that point, it made no difference to me.

From a taxi window at 11:00 in the morning, San Miguel de Allende looked like a typical colonial-era city in Mexico's central highlands. This famous colonial city is known for its baroque Spanish architecture, thriving arts scene and cultural festivals. I saw glimpses of what was to come through the taxi's windows.

What first caught my eye were the city's historic, cobblestoned streets that made the taxi ride feel like I was engineering bumper cars at a local carnival. I never saw or walked on a paved street again for the next 8 days. 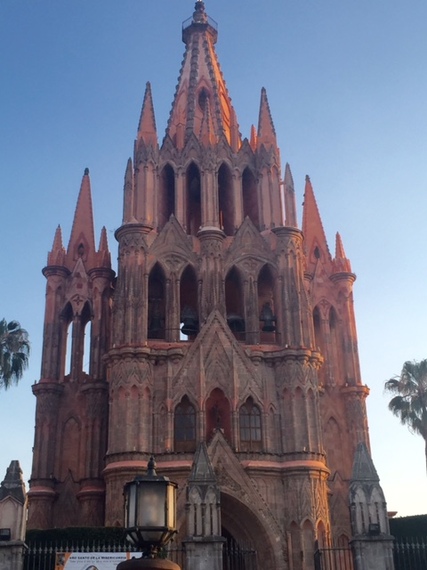 My boyfriend was my tour guide in San Miguel de Allende. He had traveled to the city about 10 times and he was madly passionate about San Miguel and it's inhabitants, it's Baroque architecture, its weekly festivals and the truly amazing art scene and artists community. The city possesses one of the most exquisite artists community since probably Paris in the 1920s. The Fabrica La Aurora is one of San Miguel's unique destinations, a beautiful art and design center housed in a former textile factory from the turn of the century.

The Spanish founded this 1900-mile high city in the early 1500s. The city's original name came from Father Juan San Miguel. In 1862, the city changed its name to San Miguel de Allende in honor of a very rich and important man named Ignacio Allende. After silver was discovered in the mid-16th century, the city became a commercial and military hub. Of interest to artisans and historians is that San Miguel claims to have invented the scrape. Yet, I discovered that there is more richness and variety to inhale in this magical city than one can reasonably expect.

The wonder of San Miguel de Allende is that it doesn't take long for the city to make you feel that you belong to San Miguel de Allende and it belongs to you. There was a very good reason that UNESCO declared the city and its surroundings a world heritage landmark in 2008 besides its colonial and baroque architecture and its importance in the Mexican War of Independence. 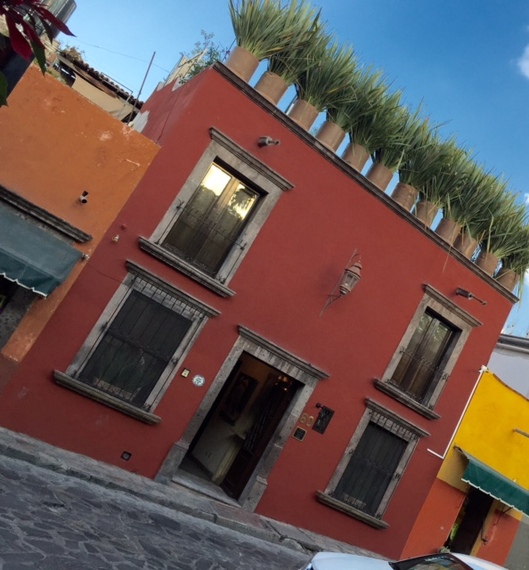 San Miguel de Allende means color on many levels and not just the obvious myriad of yellow, blue, red, green, orange and ochre on buildings, gardens, interiors, cobblestones, sky and food. Color defines each and every present moment in the life of the city in as it passes before the eyes. The colors of San Miguel radiate artistic confidence and past historic times and themes.

The city is built mostly in a straight grid. There are no parking meters and no traffic signals. Everyone drives on the honor system and that means that buses do not regard pedestrians and cars will stop when someone has stepped off the curb. There seems to an intuitive mindset when cars come to an intersection. Drivers stop their cars; everyone acknowledges a taciturn moment of human life.

All streets are mostly the original 250-year-old cobblestones. It is rare to find a street that one can walk on without tipping over so it requires walking with head down and heart extended. Even the sidewalks are painted in various colors with bougainvillea vines falling down the outside iron-gated windows. These roads are lined with colonial era homes and churches. With a few exceptions, the architecture is domestic rather than monumental, with well-tended courtyards and rich architectural details.

Local stores are the usual alignment of clothes - some more fashionable than others - antiques, art galleries, restaurants and auto parts. In fact, every fourth store sells auto parts because cars and taxis need constant attention due to the unpaved streets. It was curious to me, however, was the singular absence of shoe repair shops. After walking for eight days on cobblestones, I felt the need to have my shoes experience a tune-up, too.

I am a door-lover and San Miguel de Allende's historic center has two thousand colorful doors framed by handcrafted ironworks. Behind these colonial doors are as many different well-preserved and startlingly beautiful courtyards. 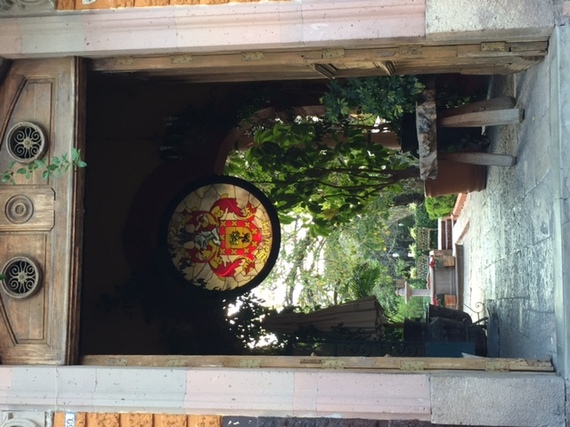 If you need or want a daily workout, San Miguel de Allende is your personal gym. Steep, hilly streets are ubiquitous. Derriere muscles, hamstrings, abs and quads are clinching all day. Legs get in shape faster than you can say San Miguel de Allende. But that's a sideline to your visual feast. Just remember to look down at the uneven cobblestones and surprising angular driveways. Angle twisting is a repercussion for fantasizing that you'll live in San Miguel de Allende once you've retired or are extremely bored with politics in the U.S.

I was completely unprepared to encounter, however, a large ex-pat community who either live part time or full time in this magical city. I have no statistics that there are equal numbers of Canadians as there are Americans, but I do know that every third person I met was Canadian, including our Airbnb host. And I was also interested in the number of single, older women - and even some younger female artists - who chose to live in community with like-minded souls.

It seems every North American knows a good bargain when they see one. The mean temperature of San Miguel rivals that of San Diego; the cost of living is inexpensive and you get more than at first meets the eye; the food is fresh, organic and superior in taste and variety; there is an incredible cultural scene that includes professional dance, musicians, opera, learning lectures, cinema and documentary series; there is a Biblioteca Publica de San Miguel de Allende that rivals any public library anywhere in the world for its academic and literary services. It's heaven to sit all day in a courtyard with books, coffee and the best omelet this side of Austin.

When I travel, I gravitate to the people and to the small but interesting exchanges that stay for years in my mind and heart. Because I was in San Miguel de Allende to attend an Argentine tango festival, I was able to meet locals who either lived full time in the city or came to stay for months on end. And everyone I met, every person I danced with from the local scene, every local shop keeper I greeted possessed positive energy and seemed happy and fulfilled because they live in an exquisite paradise where art, courtesy and cultural exchanges bring meaning and joy to the living experience.