Bodine Jackson Balasco has spent most of his life perfecting what many people claim is one of the most unique and unforgettable entertainment experiences they've ever witnessed.
Just don't bet against him- he can deal you any poker hand you want, after you shuffle the cards!
But there is no betting going on here -its all ok-he is just an entertainer-but one who may change the face of magic entertainment in the future.

He calls himself "the Last of the Riverboat Gamblers," and he's as smooth
a talker as you'll ever meet. And in his shows he performs some of the most extraordinary feats of sleight-of-hand magic you'll ever see, while playfully interacting with the audience and making them laugh, from start to finish.

Indeed, what Bodine can do with a deck of playing cards must be seen to be
believed. 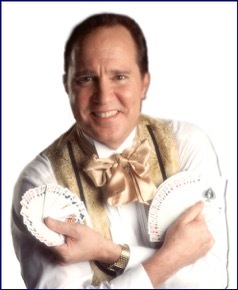 But it's his entertaining showmanship that sets him apart. He presents his astonishing demonstrations of "card table sleight-of-hand" with such charm and
flair that everyone - even if they don't know a Joker from an Ace - is thoroughly fascinated and royally entertained.

Surprisingly, Bodine didn't have any kind of interest in magic in his early years.

An "Olympic Games hopeful" during his university days at UCLA, he didn't even think about touching a deck of cards until he was 25 years old. While attending UCLA as a scholarship athlete he earned degrees in "Speech Communications" & "Social Psychology," along with honors as team captain and stadium record-holder.

Upon graduating he was determined to continue training as a distance runner, to realize his goal of competing in the Olympics. But at the age of 25, an athletic injury brought his Olympic dreams to an abrupt halt.

It was at that time, when he was uncertain what he would do next with his life, that he first saw a professional magician perform sleight-of-hand magic.

"The first time I saw a guy perform really skillful sleight-of-hand, it hit me like a lightning bolt," recalls Bodine."I'll never forget the feeling I had in that moment. I knew, right then and there, that was what I wanted to do for a living."
Characteristically, the next morning he went to the library and checked out 11
books on sleight-of-hand magic, and completely immersed himself in his newfound passion.

Six months later Bodine was making his entire living as a sleight-of-hand magician, starting out by performing on street corners and in saloons in San Francisco, then in small nightclubs on the west coast of California.

But he quickly discovered he wanted to add in something extra that would set
him apart, that would make him more interesting than just being a magician.

When he was younger he had a fascination with the historical character of
the "American riverboat gambler," and he decided to combine that with his
sleight-of-hand performances.

Bodine so completely captured the character and the theatrical flavor of an American riverboat gambler, that when the Chairman of the Board of the Delta Queen Steamboat Company saw him perform at a nightclub in Los Angeles, he offered Bodine a job on the spot, entertaining onboard the then-brand-new "Mississippi Queen" passenger Steamboat, traveling up and down the Mississippi River. That entertainment booking lasted five years.

"What a glorious experience that was, living onboard a genuine Mississippi riverboat and entertaining the passengers as a riverboat gambler. At one point during my five years onboard that incredible steamboat I was performing three different one-hour shows each week. That's when I decided I would not only perfect my magic, I would also put in the time to learn and perfect all of the real riverboat gamblers' secret techniques. And add them dramatically into my shows."

Since leaving the steamboat and the Mississippi River, Bodine's performances as "The Last of the Riverboat Gamblers" have taken him all over the world. He's even done a command performance for the President of the United States.

And his peers at the Academy of Magical Arts have nominated him
"Best Sleight-of-Hand Magician of the Year" and "Best Comedy Magician
of the Year"... three years in a row.

So, what's next for Bodine Jackson Balasco?

"Well, I've done just about everything I've ever wanted to do, except for one thing," says Bodine. "I've always wanted to build a special entertainment theater designed specifically for this 'card table sleight-of-hand magic show' I've created."

Bodine upped and moved to Las Vegas and discovered he also had to have a respected local show producer attached to his project if he was to have any chance of success.

He managed to arrange a brief meeting with Jeff Kutash, one of the most famous show producers in Las Vegas history. "When Jeff Kutash agreed to meet with me,
he told me on the phone he was just trying to be polite, and he didn't think I was his kind of entertainer. And he would only have 15 minutes to spare," Bodine says with a big smile.

That first meeting between the two of them lasted three and a half hours.

Two days later, after making Bodine perform several hours of his best sleight-of-hand entertainment for him, Jeff Kutash said, "I've never seen anything quite like this. And I love all of it. Count me in!"

And so, Bodine Jackson Balasco is about to create and experience the final chapter in his remarkable saga as "the Last of the Riverboat Gamblers"... with his own specially designed theater in the entertainment capital of the world, where he will continue to charm, amaze, and entertain people in every way he can.

A true American success story in the often tough world of show business!Balasco is not 'disappearing' anytime soon.
Find our more about Balasco at:http://NewShowInLasVegas.com