You've probably never thought about going to Guatemala, so it will come as a surprise to be told that in a few years it is going to one of the world's hot destinations (that is, for anyone bored by lying on beaches, eating at restaurants, and shopping at malls that can just as easily be found at home).

*It's known as "the land of eternal spring" because the temperature is relatively mild most of the year in much of the country (I was there in April and it was never very cold nor hot -- in the rainy season May-October the thundershowers are brief).

*Guatemala is a lush paradise, with terrain that runs from mangrove swamps to 7000-foot mountains, and has such vibrant flowers that they are a major export.

*There are 800 species of mammals and it's an up-and-coming destination for bird-watchers.

*It's a foodie's dream -- I don't do restaurant reviews because of dietary restrictions, but managed to stuff myself three times a day on a nine-day visit (it's also a contender for the world's best coffee).

*The water is safe, Internet connections are good, and there are plenty of first class hotels (or eco-lodges, if you prefer).

*Despite a violent past, it's safer to be there than stay at home.

*Guatemala is only about five hours away from anywhere in the U.S., yet can transport you something wholly exotic: the fascinating culture of the Maya people.

Maya civilization started there 4,000 years ago and because its hieroglyphics couldn't be deciphered until the 1980s (20 percent are still a mystery), our understanding of them is changing almost daily. The world's most exciting archaeological work is being done there, so you can exercise your inner Indiana Jones and help out or just visit the sites and museums to admire their astonishing artifacts. Scholars' initial theory was that the Maya were mystical and scientific, but not warlike. As we eventually learned, they were actually all three, in spades.

Before the trip, I listened to the brand new CD program of The Great Courses' Maya to Aztec: Ancient America Revealed by Edwin Barnhart to find out how much had changed since I had read about them a decade ago. Some of what I learned:

*Their wars were not only for territory and power -- they wanted access to enemies' supernatural realms (aided by the sacrifice of prisoners).

*Math wizardry helped them create the world's most accurate calendar.

*They made sophisticated and beautiful pottery, despite having no potter's wheel.

*They played a strange ball game -- hitting a small ball with hips and elbows into an impossibly high ring -- which was not simply a sport, but a religious ritual.

*Their central cities were built as sacred spaces that reminded everyone of the creation myth and the divine power exercised by rulers.

*Each ruler wanted to absorb the power of predecessors by building temples over the old ones, which were painted red and covered with brilliant murals.

*New research helps explain why Mayan cities were mysteriously abandoned by 900 A.D.: among the newly realized factors were that it was the end of a calendar age that required change and the living were crowded out because burials were required within the city.

The last Maya kingdom near Tikal fell to the Spaniards in 1697, but the people stayed in the area. Today's Maya (over half the country's population) have kept many of their ancient ways, merging their Catholicism with native beliefs, consulting with shamans as often as they go to church. They maintain a way of life governed by seasons, clans, and folk memory, while their bright, handmade clothes are not costumes put on to attract tourists, but an expression of the way they see the world.

Having endured the frustration of trying to be my own guide, I'm a believer in using bilingual specialist tour operators wherever I go, so I joined Elsie of Bella Guatemala Travel a few days late in the itinerary, at the beautiful colonial town of Antigua. Over 100,000 people participate on what is said to be the world's largest Good Friday procession: think of it as part spectacle and part penance, as elaborate floats depicting scenes from the life of Jesus are carried through the narrow streets, which have been covered by festive designs made of flowers and colored sawdust. You can get a good overview of this in Insight Guides: Guatemala, Belize & Yucatan. 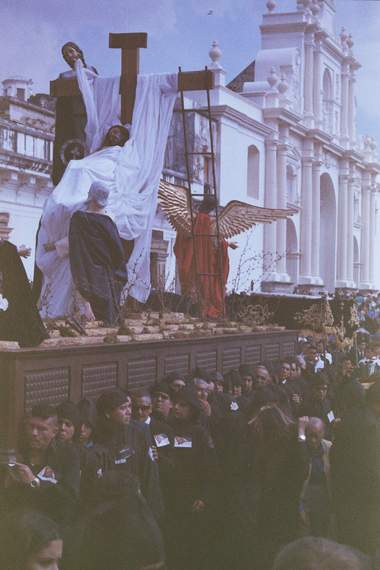 Elsie was flexible about the schedule and we decided to visit a traditional Mayan village on the shores of magnificent Lake Atitlan, surrounded by volcanoes. We were joined by Jose Antonio Gonzalez, who is not only passionate about his work as an archaeologist, knows how to get anyone excited about what looks an ordinary mound of grass. On the way, we stopped at the site of Iximche, where the Maya still leave offerings on altars to the spirits.

We visited a women's collective which makes its own cotton thread and hand-weaves clothes dyed in vivid colors using botanicals, a process that produces such high quality products that they are always backlogged with orders. On the way back to Antigua we got stuck in a holiday traffic jam for hours, which led to one of the delights of small group tours: you get to talk with people of very different backgrounds about everything under the sun (favorite novels, alternative medicine, psychology, the stupidity of reality TV).

On Sunday, we hiked to the top of Mount Pacaya, a volcano that devastated the area in 2010. Rather than peering into the smoking cone, we found the rocks near the top hot enough to roast marshmallows, next to the Lava Store featuring native crafts of volcanic glass.

For the next three days we stayed at Hotel Villa Maya, located on an idyllic lake (if you didn't mind the crocodiles). On the first day we explored the newly-opened site of Yaxha (700 B.C.-700 A.D.), the third largest known Mayan city, after the biggest, El Mirador in the northern wilderness, and runner-up, Tikal. 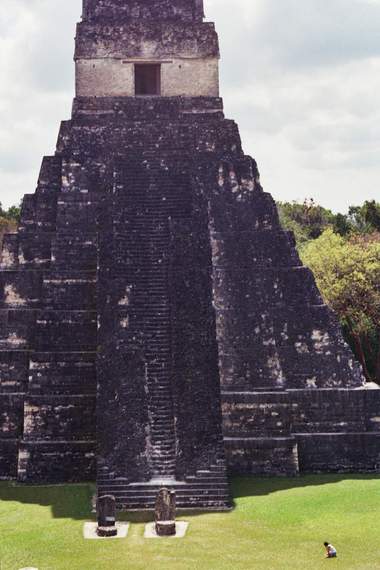 Tikal was often one of the greatest powers in the Mayan world for six centuries from 250 A.D. Of its 2,800 known structures, only 5 percent have been excavated, which is why the surprises keep coming. The most spectacular is the Temple of the Great Jaguar, 144 feet high, where Lord Chocolate was buried (chocolate was a sacred drink). The best view is from the top of Temple IV, towering over the forest at 180 feet (a scene from "Star Wars" was shot from there).

Guatemala City is an underrated capital and overlooked as an archaeological site. We spent the last two days with Jose visiting some of the 25 mounds that are still being excavated, out of the 350 that constituted the ancient city of Kaminaljuyu, now largely under the modern capital. Several of the museums have world-class treasures, especially Archaeology and Ethnology, Miraflores, and Popol Vuh. Any history buff will be wowed by the craftsmanship.

It's no wonder that Guatemala is one of those places that keeps people coming back.