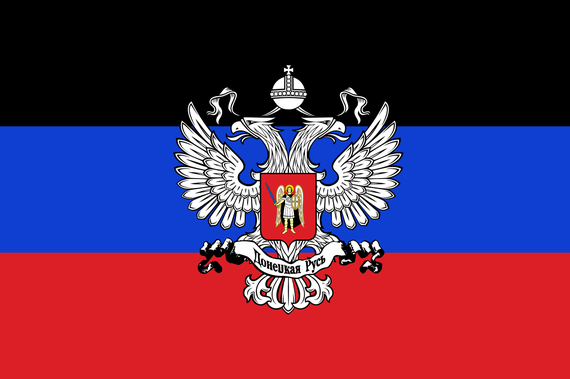 Three weeks ago a Russian who had led a motley group of Ukrainian separatists and their Russian sympathizers was blown to bits in the elevator of his apartment in the eastern Ukrainian city of Donetsk.

Speculation immediately began about who had killed Motorola, a 33-year-old who had bragged about committing the war crime of executing captured Ukrainian army prisoners.

My guess is that it was the Russian Federal Security Service, or FSB, the successor to the KGB.

I arrived at that conclusion by the process of elimination.

Motorola's assassination was too sophisticated for rival separatists to have pulled off.

It involved a bomb being placed in the elevator at a location the victims were unable to see, and set off by remote control.

Motorola and his bodyguard were wearing full body armor, but the blast was so powerful that all that was left of them was pieces of meat.

The sophistication of the operation indicated that it was done by professional assassins -- either Ukrainian or Russian intelligence.

Although I'm sure Ukrainian intelligence would love to get close enough to the most notorious separatist commanders to wipe them out, those commanders have taken special precautions for a long time to make sure they don't fall prey to Kiev-dispatched assassins.

That makes it unlikely that Ukrainian intelligence operatives have been able to get close enough to key separatist commanders to assassinate them.

The story is different with Russian intelligence.

It would be no problem for FSB agents, disguised as Russian troops or mercenaries, or Russian government functionaries helping the separatists, to learn separatist leaders' routines so they could snuff them.

The assassinations of five high-profile separatist military and political leaders besides Motorola and a dozen lesser ones suggest there is a concerted campaign to purge the current leadership.

Why such a campaign?

One explanation is that the Kremlin wants separatist leaders it can control rather than the current crop, some of whom may be construed as too independent.

Moscow's support of the Donetsk and Luhansk Province separatists has come at considerable cost.

It has poured tons of materiel into the east and sent in mercenaries and regular Russian troops, many of whom have returned to Russia in body bags.

Sanctions that the West slapped on Russia for seizing Crimea and aiding the separatists have taken a toll on the economy of Russia, where people are starting to grumble -- albeit quietly, because loud complaints can lead to all kinds of unpleasant retribution.

Those who think Russia is behind the assassinations say the reason for the campaign is that Moscow wants to get out of a situation that is draining it financially and making it an international pariah.

The best extrication tactic would be achieving a peace deal that involves separatist territories remaining in Ukraine but becoming autonomous.

Many believe that a prerequisite for such a deal, however, would be "making the breakaway republics seem respectable to local and international audiences -- and that requires eliminating any would-be allies who have trouble following orders," according to Foreign Policy magazine.

If you think it's cold-blooded to assassinate those who have helped you achieve various political aims so you can get to your next set of goals, well, you're absolutely right.

The Soviet era generated thousands of examples of leaders using others to do their dirty work, then getting rid of them.

I've read that a number of Ukrainian separatist leaders are saying privately -- they wouldn't dare say it publicly, of course! -- that they believe the Russians are behind the assassinations.

This, of course, makes for uneasy sleep for these leaders, as they wonder if they will be next.

It should also make the leaders of countries that are Russian puppets -- like Armenia -- worry about their tenure as well. I'm not suggesting that they need to worry about being killed. There are other ways to oust those who have fallen out of Moscow's favor.

The Russians showed long before their assassination of Josef Stalin's rival Leon Trotsky in Mexico in 1940 that they are ruthless about eliminating those they see as getting in the way of their political goals.

It matters not that many victims once were loyal soldiers, doing the leaders' bidding.

The Ukrainian-separatist leaders who are worrying about how much longer they have to live probably should have read more Russian history before taking up arms against their own government.