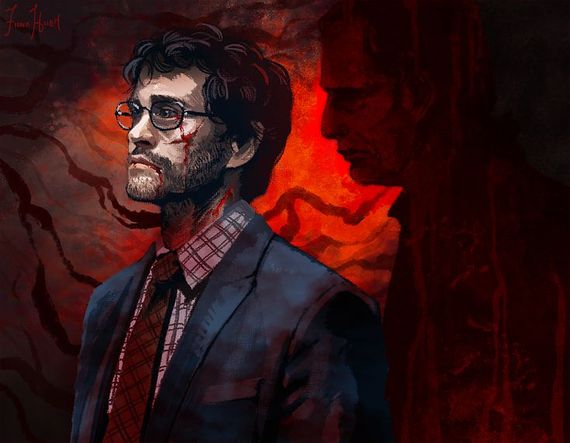 With an appropriately bloody and dashing full moon finale came the close of three amazing seasons of Bryan Fuller's Hannibal, hands down some of the best television ever made in the history of the medium. I would have no problem writing a book about every visual metaphor, every intentional blink, and peel back each layer of meaning like Hannibal Lecter would certain victims (*cough* Alana Bloom *cough*).

The level of art in Hannibal was and likely will be unsurpassed on television for a long time to come: Oscar-caliber performances, art direction, cinematography, and a new category for food styling would absolutely sweep every awards category. The grotesque deliciousness of Bryan Fuller's unbelievably brilliant and astute adaptation of the well-read Thomas Harris books was beyond our visual translation dreams.

I savored every single frame of Hannibal, often going dizzy from the eye feast because I would forget to breathe, even -- and sometimes especially -- in the moments of beautiful horror the likes of which I had never in my life experienced in those ways or ever. The Human Honeycomb, the Man Tree, the Bloody Angels, the Mushroom People, the Color Wheel, the Heart Stag, and so much more. So many awfuls wrapped in such beautiful packages: a word does not exist to describe how singularly Hannibal's tableaus resonated through me. Fuller concocted an epic arthouse horror show with such surgical precision that it, in fact, can be summed up in only one word: PERFECTION.

Hannibal was also singular in how much Fuller and Company were inspired by the Fannibal community and integrated fan art into the aesthetic of the show. Bryan Fuller's feminism made Hannibal the first crime, horror, drama show to not feature rape. On so many levels, we'll be marveling at what Fuller and Company accomplished for years to come. And I hope this sets a new standard for television in general.

I'd first read Thomas Harris's Red Dragon when I was around 8 and Silence of the Lambs came shortly after. Red Dragon sparked in me a peculiar love affair and morbid fascination with all things Hannibal Lecter. I've read each of the books multiple times and have the film adaptations of Dragon and Lambs virtually memorized. And while I'd remembered that the Will Graham of Red Dragon was highly sensitive, empathic, and borderline psychic, it wasn't until Bryan Fuller got his hands on the canon that we received the term empath for the "it" that Will Graham is.

You see, all my life people told me that there was something wrong with me because of my hypersensitivity. My family members often "joked" that I should be institutionalized. I heard the phrases "Stop being so sensitive," "You're overreacting," "You're crazy," so much and so often since I was a child I had internalized it to the point where I fundamentally believed they were right.

The very first episode of Hannibal happened to air on April 4, 2013 -- synchronicitously my birthday. I watched Apéritif with its new, haunted, and beautifully traumatized iteration of empath FBI profiler Will Graham and saw so much of my own behavior mirrored in Hugh Dancy's gloriously apt performance of a highly sensitive individual in a world of torment. I watched all the replays that night, tears streaming down my face, with one thought repeating over and over: Maybe I'm not crazy after all. Maybe I'm not crazy at all. Maybe I'm not crazy.

I took to Facebook with the query, "Are there people like Will Graham in real life and could I be one of them?" I also plugged "empath" and "empathic personality" into Google. My Facebook friends returned with a handful of articles about the Highly Sensitive Personality and agreed that I sounded like one. Google gave me links to Dr. Elaine Aron, a psychiatrist and researcher who is considered the leading scholar in empathic personality research. I took all the personality tests and more than qualified as a Highly Sensitive Person. I really wasn't crazy.

As it turned out, Dr Aron estimates that 1 in 5 people -- roughly 15-20% of the population -- are highly sensitive, which was one of so many amazing things I learned as I delved into research on empaths. I wasn't alone. I wasn't even that special. I had just found my tribe. Happy Birthday to me.

Seeing Bryan Fuller's Will Graham and his super-empathy in action, his ability to close his eyes and know things about another's motivations, his unique way of putting together stories about fellow humans, his sad soul and tortured self, was the mirror into my own personality quirks I'd desperately needed and found nowhere, and certainly not in pop culture. I finally understood the breadth of how I'd been getting gaslighted all along.

For the first time in my life I looked inwards and saw that that sensitive part of me others belittled and disparaged was in fact the root of my own power and the source of my own healing, as well as the biggest gift I have to offer the world. I spent days crying after that first episode aired as I read everything I could find about the Highly Sensitive Personality. But this time the crying was good tears, the kind of tears that wash your soul clean of poison. It was my Becoming.

In the days and weeks post-Hannibal's wicked finale of a mic drop a lot of people are going to write about the artfulness of the show, the incredible acting, the awesome production value, and they're also going to begin analyzing the story and character arcs, unpacking all the visual symbolism, all the references that inspired such gruesome wonderfulness. There is so much to unpack you could get a PhD in Hannibal and still not get to it all.

What I want to bring home here is the magnificent social and cultural contribution to humanity Hannibal wrought with its entrance into our lives. Hannibal assisted in the mainstreaming of not just empathy, but also the mainstreaming of the empathic personality and highly sensitive individuals as forces to be reckoned with in our extrovert-heavy world.

Have you noticed how it's only been in the last couple years that once a week there's a new article on virtually every media outlet about the benefits of being highly sensitive and the often-related introvert personality?

Hannibal has become part of a cultural zeitgeist that opened up a conversation about personality types that aren't really ones to toot their own horns. And by bringing the issues and struggles of highly sensitive people to mainstream media, Bryan Fuller and Company allowed for all us sensitive folks not just to join the discussion, but to contribute to it, and learn from it, and begin building our own communities and support groups.

As it turns out, there's no such thing as too sensitive.

I used the term emotional spelunking in my defense of True Detective Season 2, and it applies to Hannibal as well. Hannibal's creators and viewers both participated in the deepest of emotional spelunking in which we found ourselves communing with the darkest and most entrenched monsters of our psyches in efforts to integrate them in our lives instead of fight against them.

Hannibal also beautifully portrayed the sinister side of being so sensitive, how difficult it can be to suffer from powerful intuition, and how easy it is for an empathic personality to lose oneself in other people's darkness. It went into grim detail about how it feels to be gaslighted, used, and manipulated when being highly sensitive. While detailing the struggles of an empathic personality, Hannibal also gave us an opportunity to discuss the empath's foils: the narcissists, the sociopaths, and the psychopaths. On the spectrum of sanity, the highly sensitive are closer to sane than we're usually taught to believe.

In these three years of watching Hannibal I have seen my own inner struggle to accept myself and purge other people's misperceptions of me once again mirrored in Will Graham's enmeshment with Hannibal Lecter. For Hannibal Lecter and Will Graham, the end of their affair was a fait accompli, and all empaths have their version (or several) of Lecter who they need to shake, gaslighting and all. Not everyone is able, but yet that fight becomes part of our greater sense of collective Becoming.

Because the doors to my own self-awareness opened up thanks to Hannibal, these past three years have been the most fulfilling years of my life. I am grounded in a way I never was before, my diaphanous sense of self now has boundaries, and almost most importantly, I am able to help others -- and especially other highly sensitive people -- do the same. What a relief it's been to at long last know who I am, where my empathic personality fits into this world, and honor both without apology.

Bryan Fuller and Company, from the everything I am I thank you. For the art, the magic, the wonder, the horror, the bloody beauty, and the wisdom you brought through the screen with such thoughtfulness and grace.

I have never been sadder about the demise of beloved art, but I have also never been so grateful for all that you brought into the world.

You made this one broken teacup whole again.