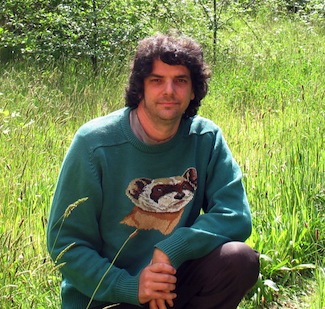 Violence doesn't happen in a vacuum. To address and to end violence against women globally, we must consider the factors and circumstances that contribute to it, from the local to the planetary. That's why V-Day has collected a series of articles for One Billion Rising from some of the great thinkers, activists, voices around the world.

We asked them: How do poverty, economic policy, politics, race, class, the environment and other forces influence violence against women?

The man box is full of proof. Except that there is no man box, the man box can never be filled, and real men don't need proof.

Let's start with Abraham and Isaac. You know the story. God tells Abraham to slit his child's throat. Abraham ties up his son, raises the knife, and at the last moment God says it was a test. End of story. Lesson? Abraham shows, by his willingness to violate his child, the proof of his worth. And Isaac learns that his father was willing to kill him rather than act against the cult of masculinity, against the rules of the man box.

There are many rules of the man box, even though there is no man box, and there are no rules. Why call it a box when it's the way things are? And why call it a rule when it's who you are?

Rule 2: There is no box but the man box, and thou shalt have no other boxes before it.

Rule 3: That's the way things are.

So I'm in a restaurant, and I overhear one guy say to another that he's in pain. The other responds, "Suck it up. When are you going to quit being such a woman?"

This also means, among many other things, that unless a few men are excruciatingly busy, there are a lot of rapists out there, a lot of members of the cult of masculinity, a lot of men who adhere to the rules of the man box.

But you already knew that.

Because if there were, well, there isn't, and can't be, and mustn't be.

So there must not be a man box, because everything is part of the man box.

But of course rule 5 does not exist. Nor does rule 1.

The other day I saw an astronomer saying why he thought it was important to explore Mars and other planets: "It will," he said, "answer that most important question of all: Are we all alone?"

I have an even more important question: is he fucking crazy?

No, just a member of the cult of masculinity.

Did you know that 200 years ago there were flocks of passenger pigeons so large they darkened the sky for days at a time? And flocks of Eskimo curlews so thick that ten, fifteen, twenty birds would fall to a single shot? There were so many whales in the North Atlantic they were a hazard to shipping, and there were runs of salmon so thick they would keep you awake all night with the slapping of their tails against the water. And he asks if we are alone?

Only if you're a member of the cult of masculinity, in which case you are of course alone, with other members of your cult, because you have declared yourself to be the only one who matters, the one who does to as opposed to everyone else, to whom it is done.

And do you know why?

And did you know that the world used to be filled with thousands of vibrant human cultures? And that human cultures are being driven extinct at an even faster relative rate than nonhuman species?

And do you know why?

But the man box isn't full, because the man box--which does not exist--can never be full.

The psychiatrist R.D. Laing famously asked, "How do you plug a void plugging a void?"

That's the question, isn't it?

But of course it isn't the question because men don't have a void, and if they did have a void they certainly wouldn't plug it with a void.

Someone once told me that any hatred--or maybe any void--felt long enough no longer feels like hatred, but rather like religion, or economics, or science, or tradition, or just the way things are.

With all the world at stake I need to speak plainly. The problem is that within this patriarchy, identity itself is based on violation. Violation becomes not merely an action but an identity: who you are, and how you and society define who you are. Within this patriarchy men's masculinity defines itself by identifying others--any and all others--as inferior (which is why those stupid fucking scientists can ask "Are we all alone?" as they destroy the extraordinary life on this planet), and as being therefore violable, and then violating them. For men under this patriarchy, these acts of violating others are how we become who we are. They validate who we are. They then reaffirm who we are, as through these repeated acts of violation we come to perceive each new violation as reinforcement not only of our superiority over this other we violated but as simply the way things are.

So without this identification of others as inferior, without this violation, we are not. We are a void. And so we must fill this void, fill it with validations of our superiority, fill it with violations. Thus the rapes. Thus the violation of every boundary set up by every indigenous culture. Thus the extinctions. Thus the insane belief in an economic system based on infinite growth despite the fact that we live on a finite planet. Thus the refusal to accept any limits on technological progress--more properly termed technological escalation, as it really involves an escalation of the wielders' ability to control and violate at a distance--or on scientific "knowledge." Thus the sending of probes to penetrate the deepest folds of the ocean floor. Thus the bombing of the moon.

What makes this problem even worse is that because there are always those who have yet to be violated, and because this violation isn't really solving the needs it purports to meet--it's a void plugging a void--this drive to violate is insatiable.

So what is at stake in this whole discussion is life on this planet. This cult of masculinity must not merely be left, and must not merely be exposed. It must be destroyed, or it will continue to violate its way to the end of all that is alive.

But before we can leave this cult we must understand that it is not all that is. That there is a cult of masculinity, and there is a man box, and you can leave them both. Burn this into your heart: this imperative to violate is not natural. It is cultural.

And we must resist every effort by the abusers, by the violators, to "naturalize" this drive to violate. For this is what abusers, violators, must do. They must attempt to convince themselves and everyone else that their way is the only way, that there is no other way. They must convince themselves and everyone else that not only is there nowhere outside the cult of masculinity, nowhere outside the man box, but indeed there exists neither a cult of masculinity nor a man box.

There is only this one way of life, which is not just a way of life because it encompasses all that is or ever was or ever will be. It is everything.

But they are lying, to themselves and to you. Even if they have an entire culture to back them up, they are still lying.

A global activist movement to end violence against women and girls