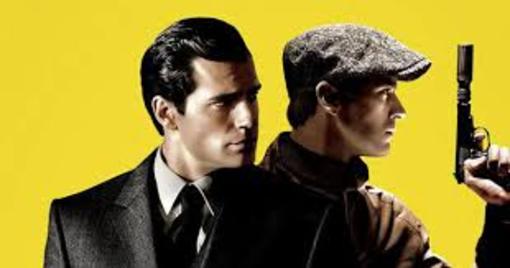 Somewhere during the final third of Guy Ritchie's tepid adaptation of the 1960's TV series, The Man from U.N.C.L.E., Sylvester Groth, whom you might remember as Joseph Goebbels in both Inglourious Basterds and Mein Führer, portrays Uncle Rudi, a former Nazi famed for the leisurely torture techniques he perfected on Jews in concentration camps. In this scene, with unrestrained glee, Uncle Rudi gets ready to display his craft on one of the leading characters of the film.

Before the "sure-to-be-fatal" process begins, our little sadistic German pulls out a scrapbook containing photographic mementos of his former victims. Black-and-white snapshots of extremely realistic scenarios of fatal inflictions of pain on Jews are put on view. Hopefully, these were staged photographs and not the real thing, but immediately The Man from U.N.C.L.E.'s tongue-in-cheekiness is decimated. The hoped-for-tone of humor is upended. Comic villainy transforms into bona fide cruelty. 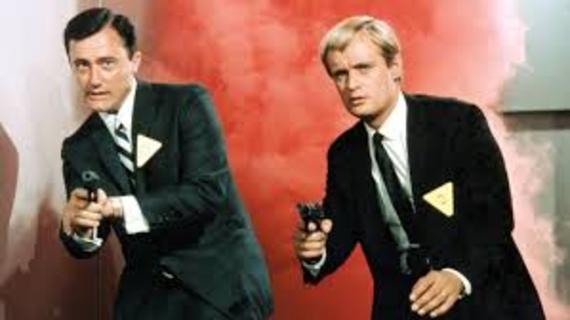 The original guys from U.N.C.L.E.

I was going to write that "comedy seldom works if the intended target of the joke is brutalized in reality," but as I was typing I thought of too many exemptions to that rule for it even to be a rule. I've never seen Jackass: The Movie, but I'm sure it fits the bill. And I'm certain Hitler was laughing throughout Fritz Hippler's notoriously warped Nazi "documentary" The Eternal Jew. But here, if the few minutes of scrapbook footage were scrapped, there'd be nothing to be grumpy about. Well, at least we couldn't be grumpy about a filmmaker's exceedingly poor taste.

However, we could still be a bit tetchy that Mr. Ritchie hasn't directed a film worth sitting through since Snatch (1990), and U.N.C.L.E. just adds to this unending swath of celluloid meh.

Here two overly attractive actors, Henry Cavil and Armie Hammer, sort of like Ken dolls with penises, portray Napoleon Solo and Illya Kuryakin, the roles Robert Vaughn and David McCallum made famous on the boob tube. Solo is a suave ex-thief now working for the U.S government in exchange for not serving a 15-year prison sentence. Kuryakin, a pleasantly psychotic Russian spy with daddy problems, gets great joy bashing up his enemies but becomes inarticulate around women. What both men have in common for some reason is a superb knowledge of high-fashion female garments and how to accessorize. 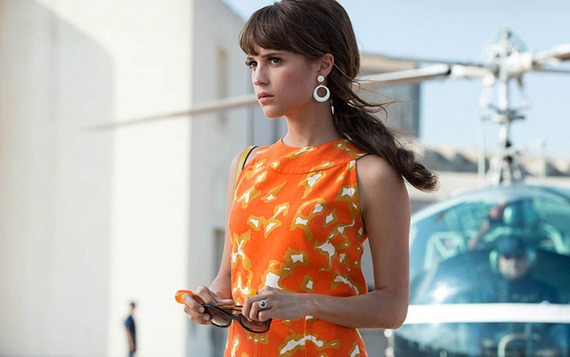 Alicia Vikander as Gaby. Is she more than a car mechanic with a mean punch?

That comes in handy when suddenly the U.S.S.R. and the U.S.A have common enemies, baddies who have forced a German scientist to make a nuclear bomb. Our guys who were previously hating on each other are forced to quickly unite to conquer evil in this world with the aid of Gaby (Alicia Vikander), a car mechanic and daughter of the aforementioned scientist.

The action, based in the 1960s, jumps from East Berlin to Italy and finally a locale at sea. There are wisecracks and punches and nonvisual sex. You do get to hear the moans, though some of them might be your own. The characters rarely become real enough for you to care about what happens to them, especially, Cavill, who still seems to be playing the Man of Steel. Nothing here seems capable of perturbing him, not even Kryptonite--and that is the main joke of the film. 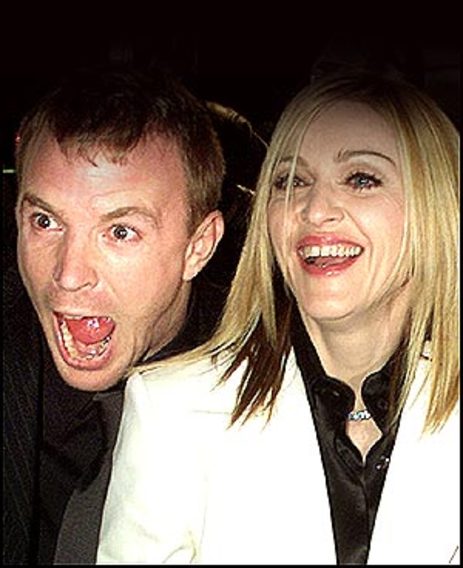 So if you think you'd enjoy some third-rate James-Bondian comic blandness sparkled up by some enjoyable 60s outfits by Joanna Johnston (Lincoln; Saving Private Ryan), you just might have a real treat this weekend.