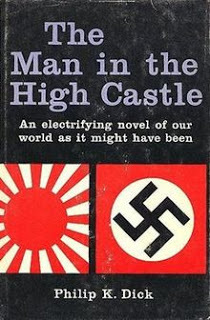 Too bad Phillip K. Dick isn't around anymore. What would his Man in the High Trump Castle look like in terms of a picture of the United States under President Trump? Of course there would be an enormous wall running all along the border with Mexico and the complexion of the electronics gadgets that people own would also be radically changed since they would be fewer and more expensive with protective tariffs making it impossible for Chinese or Japanese products to be sold in the US. Now you would pay double for your MacBook Air manufactured here in the States and of course double for your Honda, Toyotas and Subarus. But what a good thing this would be since there would be much more intensive share-a-ride programs which would also lessen traffic. As for cellphones and computers, Americans would become much more communal and in fact large kibbutzim would open up expressly to enable middle class families to stream their favorite Amazon series. While there wouldn't necessarily be more rich people, the same old ones who were rich would continue to get richer in order to facilitate more supply side economics. In fact Donald Trump himself would become so rich that he could employ both Polish workers and Americans on all his jobs and keep everyone happy. This would be one of the most important consequences of trickle down economics. Now on to foreign policy. President Trump's treatment of captured terrorists would rival any of the excesses of the Inquisition. Tomas de Torquemada would be proud. For every beheading, in fact, another jihadist would be placed in the Large Hadron Collider and turned into a Boson. An eye for an eye, a tooth for a tooth would be an important element of our justice system. There would be no more problems with Kim Jong-un as North Korea would be no more. Yes, the bad news would be that the population of the country would be annihilated, but the good news would be that there would be no need to worry about whether our sanctions were taking effect. Similarly, Boko Haram and Al-Qaeda would all have virtually disappeared along with the territories in which they once operated. Oh, finally on the matter of health care. Naturally Obamacare would be successfully repealed and President Trump would be reassuring about the fact that everyone would be taken care of, though some would claim his assurances were as worthless as the paper on which some graduates claim their degrees from Trump University have been issued.

This was originally posted to The Screaming Pope, Francis Levy's blog of rants and reactions to politics, art and culture}

Books The Man In The High Castle Donald Trump