If nothing else, Valentine's Day confers permission for knights errant to dream impossible dreams of and embark on heroic quests on behalf of their ladies. And if Hallmark and 1-800-FLOWERS aren't your cup of tea, then Musical Theatre West's fantastic production of Man of La Mancha, directed by Nick Degruccio, certainly is.

Written by Dale Wasserman, with music by Mitch Leigh and lyrics by Joe Darion, the production recounts the tale of Miguel de Cervantes (Davis Gaines), author of Don Quixote. Thrown into a purgatory-ish holding cell with his Manservant (Justin Robertson), they await a hearing (His crime? He put a monastery out of business) conducted by the judge, jury and, yes, executioner stalwarts of the Spanish Inquisition. They must also contend with an inquisition-esque council of philistine inmates, led by the Governor (Richard Gould), who threaten to burn an unnamed manuscript (The text of Don Quixote). Cervantes's defense against this ignorance? The staging of a play, with inmates as characters; the story of Alonso Quijana's transformation into the fabled Knight of the Rueful Countenance. The story seamlessly melds Cervantes's story and that of his knight. The result is a timeless evocation of the power of the imagination over oppression.

Under Degruccio's direction, the ensemble effort (that blended disparate elements like a paella) and the visuals brim with brutal verisimilitude and soar with the sort of recourse to travail that has its own adjective, quixotic. Degruccio keenly sets up and maintains the distinction between the horrid realities of the Spanish Inquisition and literary flights of poetic fancy. He makes the various threats (be they windmills or Inquisition torture) seem real and inevitable while making the whimsical and, ultimately, delusional escapades seem possible, tutelary, and entertaining.

The cast gets us to invest in their characters and their outcomes. The redoubtable Gaines' Alonso Quijana was frail and delusional, pedestrian and pitiful, while his Don Quixote was bold and spirited, romantic and florid. Before he even speaks we glean Quixote's character -- eloquent, fearless and frail -- in Gaines' gestures and movement, so that when he launches into some magniloquent knight errant business, it only confirms what we already knew about him.

Part bookish hermit, part Crusader soldier, Gaines's Quijana/Quixote seems not of this world. Physically unimposing, he speaks as if he mouths the words of some holy spirit. Really, the part demands no more. His backs and forth with Robertson's Lou Costello-esque Sancho Panza and Lesli Margherita's feral Aldonza aka Lady Dulcinea nicely contrast the stark and dangerous reality of an Inquisition era Spain with the perfect, timeless climes of the imagination.

Robertson and Margherita serve as perfect foils to Gaines. Allowing themselves to be caught up in the magical and analgesic balm of his knight errantry, they show that they (read: we) can be influenced by honeyed words and gallant deeds. Though Quijana dies in the end, his Manservant and Aldonza live on to show it was not all for naught. But what, we wonder, becomes of Cervantes as he's carted up to Ground Zero? 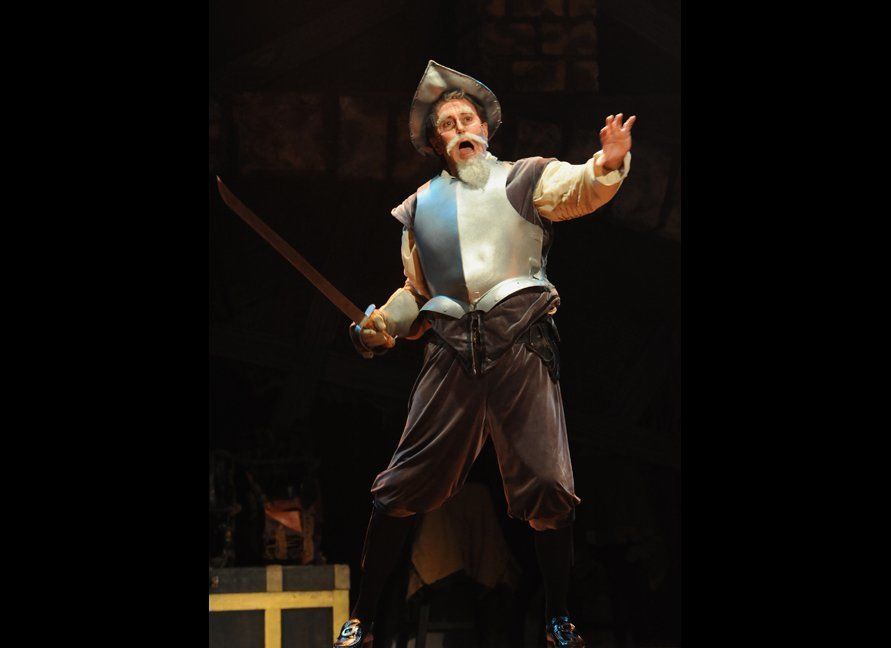