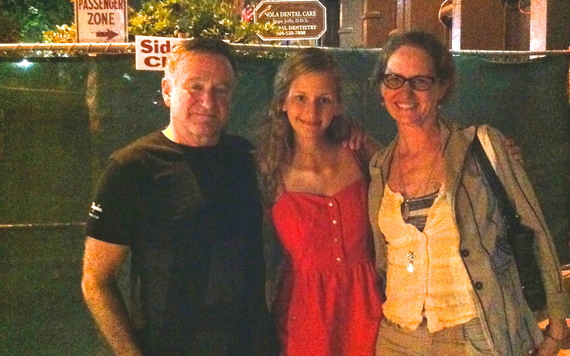 Robin Williams brought happiness, laughter and love to the world. His death brought sadness, silence and heartbreak. His death made the world a little bit emptier. I had the amazing opportunity to spend some time with Robin about two years ago. Through his never-ending jokes, I could not help but be completely in awe of him. I studied him with a smile, one of those smiles that cannot fade when you are with an infectiously comical person. I looked into his eyes. Robin was a man oozing with intelligence not only with every word he spoke, but also with every stare he gave you. Yet, as I looked into his eyes, I was shocked. I was expecting to see the joyous eyes of the man who I watched countless times on the screen; who got me through my parent's divorce with Mrs. Doubtfire, who made me laugh more than I ever had with Armand Goldman in The Birdcage and the man who was brimming with hope and life in Dead Poets' Society. Instead, I saw eyes filled with sadness and pain. I still have the clear image in my head of his smile. It was a smile that masked the suffering that he held within himself. And as I listened to him, his brilliance in all its glory, I came to appreciate him even more. Not as an actor or a comedian-but as a person.

I met Robin under rather unusual circumstances. He was playing my great-great grandfather, Dwight D. Eisenhower (Ike) in the movie Lee Daniels' The Butler. My Grandmother took me to New Orleans with her to meet Robin, the wonderful Melissa Leo (who was playing Mamie Eisenhower) and the writer of the film, Danny Strong. After my Grandmother and I were introduced to Melissa and Danny, we headed off to the restaurant along with some of the crew members- Robin nowhere to be seen. Forty minutes later I was at the brink of losing hope in thinking that the Robin would ever come. I finally decided that he was a busy man and had no time to be having dinner with us. I was about to put him out of my head in order not to disappoint myself further when I started to hear laughing. Not your ordinary type of laughing, but hysterical shrieks of joy and amusement. That laughing was coming from the waiters. Who was responsible for making them laugh? Robin Williams.

Robin came into the back of the restaurant where we were seated. He was not only extremely modest and humble, but also quite shy. He came in with his eyes downcast. While he was going around saying hello to everyone I could sense that even after all these years of being in the entertainment business he was still not comfortable having dinner with strangers. Yet, he was gracious. He talked to my grandmother about Ike, asked her questions and started to tell us everything he knew about him. Even my Grandmother, who knew Ike better than anybody else, was shocked at how much Robin knew and at how much he had studied and prepared for his role. Then he started to joke about the Munchkins in the Wizard of Oz, after that the Queen of England, then he turned to me. He asked me if I had any siblings. I shyly replied that I had a twin brother. Robin then asked me if my brother and I got along. I was still gapping at him with awe and his question caught me off guard. I sat silent for a couple of seconds and then said the only thing that came into my mind: "He's hormonal." At this, Robin's face lit up, he sat silent with a smile on his face, staring at me with his penetrating eyes. In a burst of joy, Robin started a whole comedy routine focusing on teen angst. It was the first time I saw my Grandmother cry from so much laughing.

That night was one of the best of my life. I met one of the most interesting men on the planet and relished every second of it. At the end of dinner, Robin, Melissa, my Grandmother and myself, strolled back to the hotel where we were all staying. Robin wished us a good night and started to walk to the elevator. Yet, a group of people sitting in the lobby noticed who he was and asked him for pictures. Robin graciously agreed and gave them what they wanted. Then more people came. I watched him as he agreed again and again to all of the strangers requests. He was exhausted but he kept on smiling. I again studied his eyes. Those eyes that said to me that there was something much more profound and complex than the man we saw on the screen.

Robin taught me that life was meant to be lived with passion. He taught me that even though we all go through harrowing times in our lives, we always have humor and love to distract us. He taught me that life is not always fair; that it is a complex and difficult journey. Thus, when sadness seeps into your life, when you face difficulties or when you are just trying to get through a hard day, know that you are going to get through it. As Mrs. Doubtfire would say: "All my love to you, poppet, you're going to be all right."