"The mathematician's patterns, like the painter's or the poet's, must be beautiful; the ideas, like the colours or the words, must fit together in a harmonious way," G. H. Hardy wrote. "Beauty is the first test: there is no permanent place in the world for ugly mathematics."

However, mathematics has the peculiar reputation of being a dull and dry subject that is enjoyed, if at all, by a select few. While the symphonies of Beethoven and Mozart are appealing to all, the mathematical theorems are not so lucky; they are dismal and cruel to most of us. No surprise, Gauss and Euler are not household names.

In the list of the greatest mathematicians ever, there is a self-taught genius who lived only 32 years, 4 months and 4 days on this planet. Nevertheless, his findings are so profound and elegant that many describe them as the creative efforts to reveal the symphony of numbers. Srinivasa Ramanujan was born in a poor family on Dec. 22, 1887, in Erode, a city in the state of Madras (now Tamil Nadu) in South India, and passed away on April 26, 1920.

Ramanujan's ardent passion for numbers began in his early school years; this includes creating magic squares of different sizes. His notebook gives the examples of magic squares of different dimensions, up to 8 by 8, and suggests some general method to construct them. A magic square is a square array of distinct natural numbers so that the sum of the numbers in each row, column or diagonal is the same. Nowadays, with the help of Mathematica or similar tools, a system of equations can be solved easily to find the numbers to fit in a magic square. 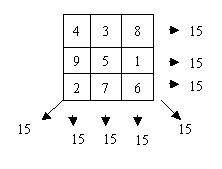 A 3-by-3 magic square from Ramanujan's notebook. The elements in the middle row, middle column and each diagonal are in arithmetic progression, and all columns, rows and diagonals add up to 15.

Most of the discoveries recorded in the notebooks are without the proofs necessary to reach the final result, a frequent criticism against the Ramanujan approach.

"The discovery of his 'Lost Notebook' caused roughly as much stir in the mathematical world as the discovery of Beethoven's tenth symphony would cause in the musical world," remarked Bruce Berndt who, along with G. E. Andrews, published the first of several volumes of books in which they provided proofs for the formulas found within the famous notebook.

During his college days, as a result of his remarkable devotion to mathematics, Ramanujan failed most of his other classes. As a poor college dropout, Ramanujan had to live with the support of his friends, but he continued to work on mathematical problems.

He used a slate and chalk to do the calculations and only recorded the final results in notebooks. He allegedly told a friend, "When food itself is a problem, how can I find money for paper? I may require four reams of paper every month."

Ramanujan communicated many of his interesting theorems with mathematicians in England. His uncanny instincts in mathematics drew the attention of the renowned English mathematician G. H. Hardy, and that helped him go to Cambridge University.

Ramanujan set off to England in 1914, and for the next five years he worked with Hardy on many exciting mathematical topics. This well-celebrated collaboration between Ramanujan and Hardy is one of the most colorful chapters in the history of mathematics. Robert Kanigel's book The Man Who Knew Infinity: A Life of the Genius Ramanujan captures the astonishing story of Ramanujan and his collaboration with Hardy.

Unfortunately, Ramanujan's health had deteriorated, and he became seriously sick. As he lay ill in the hospital, Hardy visited him. "I rode here today in taxicab number 1729," Hardy told Ramanujan. "This seems to be a dull number and I hope it's not an unfavorable omen." Ramanujan replied, "No, it is a very interesting number; it is the smallest number expressible as the sum of two cubes in two different ways."

In mathematics, this is the smallest number in the family of taxicab numbers, which derived its name from the above incident.

Ramanujan returned to India in 1919, but he died the next year. He defied poverty and transcended national borders and cultures to define the undefined. If patterns of numbers can create symphony, Ramanujan is the Beethoven of number theory.