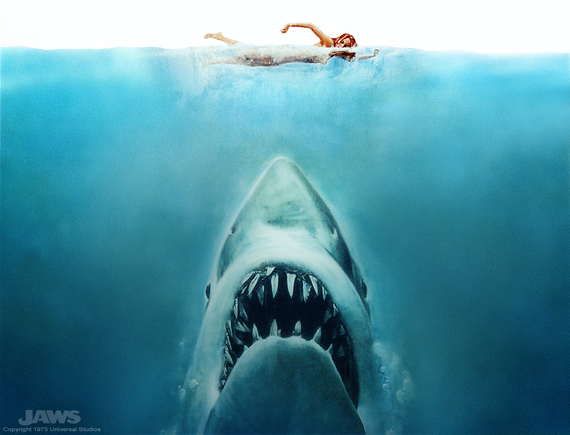 As an '80s kid, there are three or four movies that still stick with me to this day; The Karate Kid, Back To The Future, and JAWS. I can probably recite them all, and if they're ever on TV, I'll plant myself down and watch them.

I was also an '80s kid who was lucky enough to have a vacation home on Plum Island, Mass., a small and quiet summer retreat about 45 minutes north of Boston. When I was too young to walk, my parents would take me. When I could walk, but couldn't drive, my grandfather would take me. And when I could drive, I'd go there whenever I wanted.

My familiarity with swimming in the ocean meant that I was immune to such things startling me in the water, like when a piece of seaweed rubs up against your leg, or reaching your foot down toward the sand but realizing you're in the under-toe, or the speed that a wave can take you 50 feet from the shore in an instant. All of that didn't faze me. But for a good year or two, Jaws scared me half to death.

This June marks the 40th anniversary of Universal Studios' take on Peter Benchley's iconic 1974 novel. There have been several posters, book jacket designs and countless rip-offs depicting the now famous great white shark devouring a woman on the fictitious island called Amity. But no other artwork is as frightening as Roger Kastel's sketch-turned-painting, an illustration that, quite frankly, still frightens me all these years later.

I caught up with Roger (Yes, he was running) via email and asked him a few questions about the artwork.

Describe how you came to draw the artwork for the book. The first painting for Jaws -- the hardcover artwork done by Paul Bacon, was a rather tame depiction. What did you try to do or want to do to change it?

This book was presented to me as a potential best seller. I had been in Len Leones office (Bantam Books Art Director) when Oscar Dystel (the publisher of Bantam Books) came in and handed me a book. "I have a great book for you to read over the weekend." After reading the book I did a rough sketch for Len. As in all my illustrations I tried to make it as appealing to the buyer as possible and to follow the story as accurate as I could. The best visual part of the book for me was the shark and Chrissie. I didn't have to go beyond the first chapter.

Len's only comment was, "Make the shark a little bigger and very realistic." I had no idea that 40 years later it would be considered an iconic image.

And I'm sure people still come up to you and blame you for scaring them, right?

When I attend conventions I'm always amazed at the comments. The most common: "Because of your poster, I was afraid to go into the ocean for years." I love the interaction with these fans.

Getting serious for a second. Do you think in some way, the book, the movie, your artwork, had any influence to the visceral hatred or fear people have toward sharks? Maybe the tide (no pun) is turning, but for years, maybe decades, we viewed sharks as just savages.

I'm sure that this poster and movie contributed to the fear that people felt toward sharks. All I can say is that the cover and poster did what it was supposed to do.

I certainly did not know how Oscar went about handling the business dealings with Universal. I do know that before he died he was trying to get the original painting back for me from Universal.

Because there's speculation that your original painting is either lost in some storage warehouse or it was stolen.

I don't know if it was lost or stolen.

Please tell me it was insured.

Hand-drawn (painted) movie posters have really gone away since the late '80s thanks to the advent of more sophisticated computers and photoshop art. You've painted two iconic posters, Jaws, and The Empires Strikes Back. Do you see the difference in movie artwork now, from say, 25 years ago? It seems like a movie poster can be put together in a couple of hours today. There's no connection between the consumer, the movie, and the art.

I always look with anticipation when the new illustrations on paperbacks, magazine and movie posters come out. I"m sure it's much easier for the studios to do the posters on a computer. It probably beats working with different personalities of artists and easier to meet deadlines. Sometimes doing a movie poster can be hectic. I do think that many of the computer generated posters are well done.

There are a couple of documentaries that are out or coming out on the subject of movie poster art, and there's an entire market now for "alternative poster art."

Do you sense, as with everything, that poster art is making a comeback?

When I go to conventions I bring an assortment of my many illustrations. People really enjoy them. They ask an amazing amount of questions about my art. This is great feedback for me. I also have a website that shows my work, where people can contact me. I get e-mails from all over the world.

I'm not sure that change is coming but in 40 years since Jaws came out there has been a constant interest in the poster. The same with The Empire Strikes Back.

Roger Kastel can be reached at RogerKastel.com

Chris Peak is a musician and freelance writer from Boston. Follow him @chrishpeak, or visit him at chrispeak.com