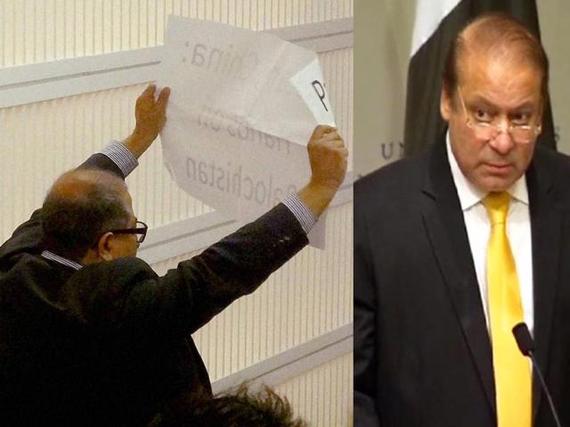 "Don't touch me. Don't touch me," warned Ahmar Masti Khan, Washington's Baloch activist journalist, "don't touch me. I am American." He had just flabbergasted Pakistan's visiting Prime Minister, Nawaz Sharif, by heckling him at the United States Institute for Peace (USIP) on October 22nd. Two strong African-American security guards immediately overpowered the man who was shouting, "Stop war crimes in Balochistan" and then they whisked him away.

Heckling is just like an elevator pitch. You get only thirty seconds to convey your message to the world. You have everybody's attention. Perhaps an overwhelming majority of the audience had never heard of Balochistan or didn't know what "war crimes" the heckler was actually talking about. Mr. Khan, who also identifies as "first openly gay Baloch on earth", had packaged his message very elegantly. He delivered four different messages, each of which was strong enough to embarrass Pakistan's PM just a day after his meeting with President Obama.

First, Mr. Khan shouted "free, free Balochistan" which reaffirmed the message of the Baloch nationalists fighting against Pakistan for an independent Baloch state. Pakistan has been doing whatever it takes (from applying internet censorship to expelling foreign journalists) to suppress the Baloch aspirations in front of the world. Another reason why Islamabad is so reluctant to talk about Balochistan is because international human rights groups say Pakistan has Baloch blood on its hands. It was ironic that Sharif, during his U.S. trip, kept on seeking the right to self-determination for the people of Kashmir, for which he also sought Washington's assistance, but Pakistan denies the same right to the Baloch population although their demand, just like that of the Kashmiris, is consistent with the United Nations Charter.

Second, Mr. Khan urged Sharif to stop war crimes in Balochistan. Given the countless cases of enforced disappearance, torture and killing of Baloch political activists, students and human rights defenders, the conflict in Balochistan can be compared with Argentina's Dirty War. However, it also has several parallels with America's Civil Rights Movement. Sanaullah Baloch, a former Senator from Balochistan, once told me that Pakistan, dominated by the ethnic Punjabis (44% of the country's population) was engaged in "racial discrimination" against the Baloch (who only make up to 3% of total population). The latter are systematically excluded from the country's army, bureaucracy, foreign services, national media and even sporting teams. Anyone who has read Princeton University Professor Gary Bass' shocking book The Blood Telegram will understand how brutally Pakistan treats its minorities. 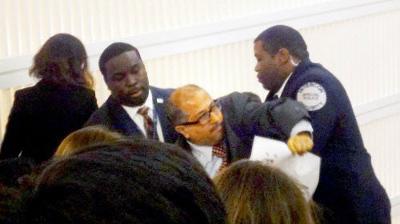 (Photo Source: The Times of India)

Remember Emmett Till? The Baloch have so many Emmetts even today in the 21st century. (Emmett was a fourteen-year old African-American boy who was killed in Mississippi in 1955 by two white men). Read the story of the ten-year old Chakar Baloch who, according to an AFP report, "was found [dead] in a stream, making him another victim of the shadowy fight in the province" in March 2014. If you think injustice does not give birth to another Rosa Parks, check out the story of Farzana Majeed, a Baloch girl who walked more than 2,150km to peacefully protest against the forced disappearance of her brother Zakir Majeed, who has been missing from Balochistan for several years.

The third message Mr. Khan delivered while heckling Sharif was about China's multi-billion investments in Balochistan. The indigenous Baloch people look at China as a mere extension of Pakistan's colonization and militarization of Balochistan. The Balochs see no benefits for them in these projects because they were in the first place, neither consulted nor promised any fruits from this 'development'. The main beneficiaries of the Chinese investment, the Balochs fear, would be the Punjabis and other dominant ethnic groups. This will eventually lead to the displacement of the Baloch from their native land.

Fourthly, the angry Baloch protestor called Sharif a "friend of bin Laden". Was he wrong? Hell, no. Who else hosts a foreigner in the heart of an expensive resort city if they are not their best buddies? Jokes apart, Pakistan has been making another policy blunder on the front to deal with the secular Baloch. It has further strengthened and armed radical Islamist groups to counter the Baloch separatists. In the long run, this policy is going to hurt Pakistan's own interests and pose a serious threat to the security of its neighboring countries Iran and Afghanistan, both of which share borders with the volatile Balochistan region.

Neither interrupting an event is an admirable practice nor is the silencing of the people who speak on behalf of victimized communities. We can't simply shut everybody up. How many hecklers will we silence? Should we throw people out of conference halls whenever they raise voice against war crimes, drone strikes or unjust wars? No. That's an undemocratic approach. We have to correct our behavior and open up to perspectives and voices that do not necessarily sound music to us.

Sharif should have at least uttered a few words on Balochistan instead of instantly returning to his written speech. After all, it was General Musharraf, not Sharif, who waged the war in Balochistan. Why was Sharif unwilling to articulate his government's policy (if he has one) toward Balochistan? It was a great opportunity for Sharif to distinguish himself from General Musharraf.

It is a coincidence that Mr. Khan heckled Sharif at the USIP but it is still pertinent to ask why the USIP has not published even one report or organized an event on one of Pakistan's most unjust wars, Balochistan, in the past one decade? What is going on in Balochistan? The USIP has a responsibility to keep the people of America, including Mr. Khan, who is an American citizen, informed about what countries receiving American aid are doing with their own people. After all, his taxes fund the USIP.

(The USIP, when contacted for this article, did not respond to my questions.)

If Dr. Martin Luther King, Jr. was in place of Mr. Khan and dragged out for raising hard questions and making tough demands, he would probably recite his 1955 address in Montgomery, Alabama.