WASHINGTON -- Jerry Parr, the quiet, quick-thinking bodyguard who saved President Ronald Reagan's life from an attempted assassination, has died at 85. I don't write news or obits anymore, but I got to know Parr after the events of that fateful day brought us together.

I was the Associated Press White House correspondent covering Reagan that day at what was expected to be a routine speech in the basement ballroom of the Washington Hilton Hotel, 1.4 miles north of the presidential mansion. As soon as the speech ended, those of us traveling in the motorcade scampered up the steps and out onto the Hilton's private drive to watch Reagan come out a door reserved for VIPs and get into his armored limousine parked at the curb. 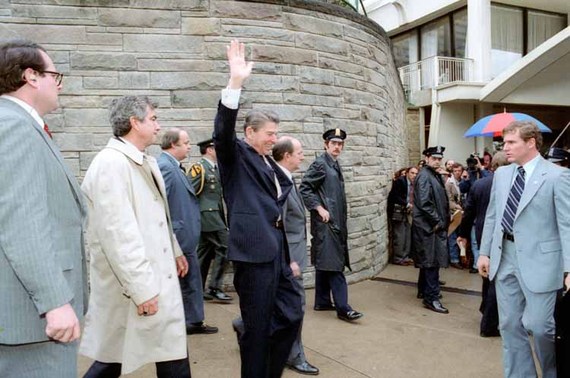 Parr, the chief of Reagan's Secret Service detail, walked just behind the president's right shoulder as they emerged from the hotel and started across the sidewalk. I was standing behind a temporary rope line between the press and a few little-noticed bystanders and the presidential entourage of aides and agents.

I shouted "Mr. President, Mr. President" in an attempt to catch Reagan's attention. I wanted to ask him about widespread concern that the Soviet Union was preparing to intervene to crush an independence movement in Communist-ruled Poland. He waved to the small crowd with his right hand, then his left, and seemed to be turning toward me as six quick shots peppered the president and those around him. The smile on Reagan's face disappeared as Parr reached for the president's left shoulder and shoved him forcefully down and toward the open back door of the presidential limousine.

I was standing a few feet from the vehicle's right rear tire and saw the two men disappear into the back seat, the heavy door slamming behind them. The wheel just to my left began to roll forward, and I realized the car was taking off without waiting for the rest of us to climb into the other waiting motorcade vehicles.

As I turned to look for a telephone to report what I had just seen, I saw guns everywhere. We all knew the Secret Service agents who accompanied the president were armed, one of them with a submachine gun, but I had never seen them draw their weapons. It still amazes me that not one of them fired at the gunman or anyone else in the chaos around them.

No one noticed that Jerry Parr's wife, Carolyn, had been watching the scene from her office building across the street from the hotel, hoping to catch a glimpse of her husband with the president. For a terrifying few moments, she thought one of the three men felled by bullets at the scene was her husband.

The agent driving the limo, following emergency protocol, sped off toward the White House with only Parr and the president in the passenger compartment. Reagan, not realizing he had been struck by a ricocheting bullet, felt a sharp pain in his chest and told Parr, perhaps half joking about the agent landing on top of him as they plunged into the car, "You son of a bitch, you broke my rib."

Neither of them knew the president had been shot. But as Parr looked his protectee over, he saw a drop of blood at the corner of Reagan's mouth. He immediately realized, he said later, that the bright red color of the fluid indicated the blood was highly oxygenated, and therefore most likely coming from his lung. Parr instantly ordered the driver to head for George Washington University Hospital, which was only about eight blocks west of the White House and actually a bit shorter drive from the hotel.

The speeding limousine pulled up just outside the emergency room entrance, and Reagan was helped into the building and swept onto a gurney for examination. As specialists and residents raced for the ER, the first medical people examining the president didn't find the entry wound below his armpit, but his crashing blood pressure, weakening pulse and shortness of breath indicated he was bleeding internally and that his left lung had collapsed.

Dr. Joseph Giordano, a vascular surgeon and head of the hospital's trauma team, arrived in the ER as a resident was about to insert a tube into the president's chest to probe for the bleeding.

"Maybe I better do that," Giordano suggested and took the instrument into his hand. As the tube penetrated the abdominal cavity, blood rushed out, and the medical team readied the president for surgery to find and close the wound. There was general agreement that Parr's quick, informed decision to rush the president to the hospital instead of the security of the White House saved Reagan from bleeding to death.