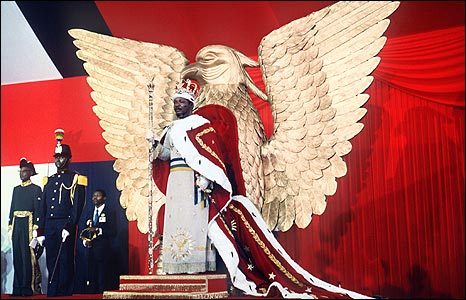 Jean Bédel Bokassa ruled as President-for-life and later as Emperor of the Central African Republic from 1966 to 1979. In his youth he served in the French Colonial Army earning the rank of captain fighting in what would become Vietnam. Bokassa's erratic and sometimes brutal regime began after he seized power in a military coup, and his actions increasingly isolated him from the international community. Ultimately he would be deposed by the French and forced into exile, though not before Bokassa had declared himself to be an emperor.

On December 4, 1976, Bokassa crowned himself in extravagant fashion, sparing no expense as he sought to create a Napoleonic empire in the heart of Africa. Anthony Quainton, the U.S. Ambassador to the CAR at the time of the coronation, describes the lavish decadence of the event which was financed by none other than the French government -- an amount roughly equal to one year's budget for the entire country.

You can read the entire account here . "Bokassa announced that he had traced his ancestry back to the pharaohs"

QUAINTON: In early 1978, Bokassa decided that his status as a seven-star field marshal and President-for-life did not give him sufficient recognition in the world of post-colonial Africa, so he proposed to make himself emperor.

When the empire was actually established, it did not look at all Egyptian. Rather, it was a black version of Napoleon's empire. That, of course, was a very expensive proposition. The French were very reluctant to back it. They disapproved of Bokassa's Napoleonic ambitions, but did not insist that he be an African-style king. They ultimately agreed to pay the full costs of his imperial coronation -- costs that ran, according to some accounts, to something on the order of $45 to 50 million....

They [the French] had no alternative to Bokassa. Bokassa had a claim to French nationality by virtue of his service in the French army. He had been a loyal friend of France on all African issues. He was a great admirer, publicly and otherwise, of Charles de Gaulle. He was a regular hunting partner of the President of France, Giscard d'Estaing, who came annually to the Central African Republic to hunt elephants with Bokassa in the eastern portion of the country.....

Clearly Bokassa's decision was thought in Washington to be the most extraordinary piece of foolishness. On the other hand, Washington was very cautious, since we had limited but real interests in terms of Bokassa's support for us at the United Nations and our limited economic assets in the country.

The embassy tried not to make fun of Bokassa in the messages and cables that we sent in. I must say I consciously tried to describe events with as straight a face as possible. It was easy to make cheap and rather amusing comments about this kind of exotic regime, but the end result might have been to put individual Americans, missionaries and business people, in peril.

The republic took some months to die or the empire some months to be born, during which Bokassa began the preparations for the coronation. He invited the Pope to crown him, as the Pope had been invited to crown Napoleon. He developed a new court protocol for the empire. He consulted a number of ambassadors on the subject, not including the American ambassador, as we weren't thought to have any particular wisdom about imperial practices. He consulted the Greek ambassador resident in Yaoundé on the court procedures at the court of Constantine Palaeologus, someone whom he felt might be an appropriate model for his own empire.

Q: Constantine Palaeologus was the last of the Byzantine emperors.

QUAINTON: That's right, in the 15th century. The Greek republican government had some difficulty coming up with anything that was useful for the new empire. Court protocol was, however, developed and we were sent appropriate instructions in a diplomatic note on how to comport ourselves in the presence of His Imperial Majesty.

It was announced, although never enforced, that all those who went into the presence of His Imperial Majesty would retreat backwards. Bokassa took all this as a great joke himself. I think he had great fun writing it all up and sending instructions around to bemused governments as to how they should behave in his presence....

A Millard Fillmore Plate for the Emperor 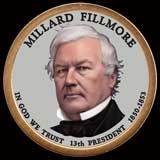 Having decided on the level of delegation, there was then the problem of the ceremonial gift that one was expected to give on the occasion of his coronation. This posed some considerable problems for us. The Office of Protocol had only a limited supply of gifts for coronations and they were generally not suitable....

Protocol came up with two plates from the Franklin Mint. Sometime in the 1970s, the Franklin Mint had produced a series of very elegant silver plates engraved in gold with portraits of the presidents of the United States.

Some of them were long since gone -- John F. Kennedy, George Washington, Abraham Lincoln, etc. -- but Chester Arthur and Millard Fillmore were still in stock, and I received two plates to give to the emperor on the occasion of his coronation. He kept me waiting for some hours to present our official gift because I was way down in the protocol list of coronation delegations. Ministers got in first.

But eventually he got to me. He expressed enormous pleasure, real or feigned, and said that the plates would have a prominent place in the imperial state museum when it was created. Alas, it was never created, and the plates have long since disappeared.

The coronation was indeed a splendid event. It took place at a sports palace built by the Yugoslav government some years before as part of their aid program. It was a rather handsome basketball stadium seating several thousand people. There was a great golden throne in the shape of an imperial eagle.

Bokassa, himself, wore a Roman toga embroidered with a hundred thousand pearls. He came wearing a gold laurel wreath in his hair, and an imperial toga and staff. As in the case of Napoleon, he crowned himself in the presence of his family, visiting delegations and selected guests. He then drove in a coach pulled by the six white horses, which had been flown from Paris to draw the new gold coach from the sports palace to the cathedral.

Coronation in a Catholic Cathedral for a Muslim Emperor 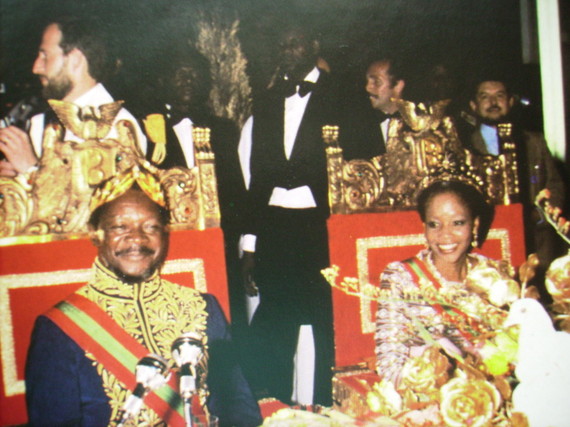 The cathedral was a rather charming brick church built before the Second World War. Bokassa's first cousin was the archbishop of Bangui and in a solemn mass the coronation was graced by Cardinal Silvestrini, who had been sent to represent the Holy Father on this grand occasion.

The cathedral had been decorated, I exaggerate not, from floor to ceiling with cut flowers flown in from France. This was a very lofty church and there must have been tens of thousands of flowers which covered the walls.

Cardinal Silvestrini sat on his throne to the left facing the altar and Bokassa sat on his throne to the right. He, of course, wore an ermine cape of Napoleonic proportions decorated with "B's" for Bokassa. It was all rather splendid. The irony of it all was that Bokassa was no longer a Catholic, but had become a Muslim some months before, during the republic, when he was visited by Muammar Qaddafi....

By the time of the coronation, Bokassa was still a Muslim and the Church had excommunicated him. So, it was all the more remarkable that Cardinal Silvestrini was there. The Roman Catholic priests of the empire, almost all of whom were European, solemnly protested to the Vatican the extraordinary decision to send Silvestrini to the coronation. They regarded this as a sacrilege and refused to participate in the coronation ceremonies.

There was a spectacular party which ended with a state dinner. In front of every guest was a bottle of vintage Dom Perignon champagne. There were many courses elegantly served, fireworks followed and the empire was launched at the expense of the French taxpayer in a rather grand way....

"The French were furious" 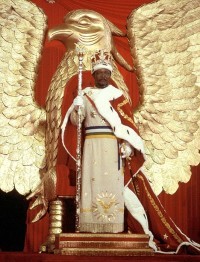 Men were expected to be in full court attire, top hat, morning coat, and striped trousers, the only problem for me being that I had rented my morning coat in Paris which was designed for a cooler climate and was of a rather thick flannel. In the 100 degree temperature of Central Africa, it was oppressive.

The ladies had all been instructed on what to wear by the empress, who invited the ambassadors' wives to a tea party to explain how they should be dressed. Long pastel dresses were favored by the empress along with broad, brimmed hats.

So all of the wives came appropriately attired. Unfortunately, when the French minister's wife came with her husband at the end of the ceremony to present the French official gift, the court protocol officer decided that her dress was not sufficiently long and she was sent away. Although the French were paying for the event, the French minister was told that he could not come until his wife was correctly attired for the imperial presence. The French were furious, but Madame Gallet changed. I was kept waiting to present the U.S. gift while the French observed court protocol.

In a quite extraordinary way it was all solemn and beautiful. If you spend enough money on arrangements you will have something that is quite magnificent in its way. We clearly mocked what was happening and deplored the waste of resources. The amount spent on the coronation was roughly equal to one year's budget for the entire country.

There were Frenchmen at every level who designed the show. Not only were there clothes to be designed, there were the imperial china, the imperial glassware, jewelry for the emperor and empress, all produced and designed in Paris. There is a most beautiful set of Limoges china with the imperial seal on it, of which I acquired a piece after the fall of the empire. It was all done by French artisans and businesses. I would guess the French taxpayers got a fair amount of money back from this event.

Without a doubt, it was one of the most bizarre events in modern African history.