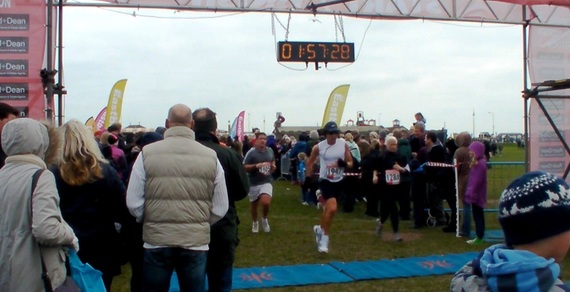 Past the Post: The writer crosses the finish line at his first Eastbourne Half Marathon, in 2013. Since then, times have improved significantly.

Indifferent. That's how I felt on the days before the half marathon on the first day of March. The weather the day before, in Eastbourne, was revoltingly wet and windy and inspired nothing but fatty despair. It was outrageously disgusting. Battling stinging rain and banshee blasts does not in any way engender enjoyment. Disgracefully, it was dark by 5 p.m., as though the day had given up and was off to bed, and as the storm battered the apartment windows, all you wanted to do was hibernate until it was over. Sometimes -- many times -- animals have more sense than humans.

That is what I did, that Saturday evening at least. Swigging cups of strong but robustly refreshing tea, like a hardened, sober sailor, while watching Tea with Mussolini and loading up on carbs -- and chocolate -- ahead of the morning's event. It's surprising how time flies when you're doing nothing, but then again there was lots to do; it just didn't feel like anything was being done at all. Run, run -- the bloody half-marathon run, the third in three successive years in this coastal southeast English town of legions of advanced retirees and their dangerously driven mobility scooters. They're long past caring.

Wholewheat fusilli, tofu, brown mushrooms -- whatever they're called (hint: chestnut) -- and tomato and heaps of chilli flakes and all scoffed down and back for seconds and even thirds. Last year at this same evening time I had had white pasta (a disgrace: why strip it of its essential goodness?), thinking the added carbs would give me added energy. When all it did was slow me down: big, stodgy fool bobbing along like an obese jellyfish unable to stay afloat.

Dessert: chunks of 90 percent dark chocolate, and more and more till there wasn't much of the big bar left. Mustn't have any more tea or will be awake half the night. The god-awful, so-called race.

I'm disappointed at how disappointed I feel ahead of this contest. Why? I'd been looking forward to it for months, training almost daily and in several countries -- Ireland, Spain, Czech Republic, England; all those glorious years of beach running in Bali -- and still. In best shape of life ever, too. Down to 5 percent body fat due to multiple programmes over the past six months, including carb cycling (no carbs some days, lots others), intermittent fasting (basically no eating till lunchtime), and fasted and strength training. Lest I forget: thrice-weekly HIIT running sessions, and three half-marathon distances (21k) in the past month. Ripped for success, really. So what could be wrong?

I wake, and it's dark, and immediately my day is doomed. What is it, 4 or 5 a.m.? I'll be wrecked by the 10 a.m. start time. Impatiently, I lie there, like a washed-up clam waiting for the tide, listening for the growls of the gulls that will herald the event day. But no, nothing. And then: a chink of cheeky light streams past a gap in the curtains, and I know it will be alright. I smile.

Some writing, tweeting, paper-reading, breakfast (muesli, with water, and tofu and mushrooms on wholewheat soya and linseed toast; easy on the coffee: I'll be running, but don't want to be running to the loo). How's the mood? Has it improved? Ho-hum. Still genuinely incandescently uncaring. Don't give a damn. However: move along.

Meditation music. Reiki all over: power up. Leg-muscle massage. Do me proud today. Push-ups, crunches, planks. Thank you, body -- really. I wholly appreciate you; do you me? I look after you as best I can. Was that a twinge in my tummy, a shard of upset threatening to derail this attempt? Nerves have no place here; they have never been of benefit -- the opposite, in fact (an energy-sapper and confidence-destroyer: get out!), which is why they're banished and I will not entertain them at all. Ommm. Breathe. Back on track.

It takes half an hour to get from my apartment to Prince's Park, and I walk like a drugged slug with overactive slime glands, as if meandering with no purpose at all on this airy Sunday morning that shortly will require massive energy. Last year I jogged down (the year before I shamefully took a taxi, and the driver perved of the female athletes streaming down: "Lycra is the best thing to happen to women!"). Kate Bush has no shame whatsoever and is coursing through the circuits in my head: "The Man with the Child in His Eyes." I find myself infused with the vision of a fellow madly, crazily, ridiculously, absurdly in love with Kate Bush but he's looking at her with an existential sadness that eats into his core and propels him to procreate. He has no choice but to do what he is here to do, and in a major way he resents it. I hum it, and sing it lowly, the chorus over and over, like the broken record it is, and walk so slowly I don't care if I miss the start of the race. I want to paint that man and his eyes. I want Kate Bush, a recluse for so long, to be fulfilled. Why do I care? Because I do.

Did I mention it's a beautiful day? Well, it would be if the wind wasn't still gusting with the visceral violence of a jihadist. Otherwise it's stunningly sunny, not a bit of fluff up there at all. Why can't there be no fast movement of air? Just calm down! Earlier, I had read a website report on the race predicting that the weather would be "perfect" for runners. Perfectly not.

Yes, lots of people milling about, lots of long queues for the portaloos. Pick up race number, reluctantly remove outer clothing and face the chill, drop off bag. Warm-up, warm-up -- loo: one last chance, and a young man at the crowded urinals, urinating with one hand and speaking into his phone with the other: "I'm at Prince's Park!" -- and then the rush to crush. This really is one of the more difficult aspects of running this race at this time of the year: standing hopelessly and vulnerably around as the frigid wind whips by, and waiting for the off. Everyone is shivering like a lunatic about to get yet another lobotomy and lose their minds all over again. I look behind and see a short, balding man beside me standing perfectly still and with the joyful concentration of the Buddha. That's the trick. Jealous. Eyes forward: I'm a few rows behind the front, not wanting to be up there in case I start off too fast and then suffer a devastating cascade of lactic acid, nor not wanting to be too far behind either.

Three years ago I came in 747th -- easy to remember as it's the name of the big Boeing, and that I never really took off -- and last year 315th. Given all my dedicated training and absolute devotion to running, which I absolutely love, by the way -- can I please come in the top 100 this year? We'll see.

It's fast, yes. How had I forgotten that? Gaining, gaining -- can see the leaders up ahead. Can I catch? Probably not, no. Don't force; run your pace. But why are so many passing me by? Over-exuberance in the early minutes. They'll soon pay for it; let them on. After the quick start, I'm trying to settle in, and to prepare for that almighty hill.

It's ahead, about 20 minutes in and past the cheering crowds, who love to look but not to partake. Greedy, slovenly souls. Hill-road, I've prepared for you. But nothing prepares you for this steep gradient that just goes on and on, forever, and less than halfway up I'm straining and thinking I'll just give up. Don't give in. Others have: they're walking instead of running and wondering how they're going to get through. I dig in and use my technique and zip past the struggling.

And downhill can be worse. Of course it's steep, but I've gotcha. With one hand out to the side as if to say stop and the other behind with my water bottle -- providing ballast -- I lean forward and race down the hill, gathering speed and tearing past my race rivals. I love it. I love the freedom, the primeval rush, the simple yet incredible fact that my legs can actually go this fast and I'm not tumbling over like a drunk on a trampoline.

Now the going is getting wonderfully good. These legs were really made for running, and they tear down the people-lined promenade and I'm gaining and gaining. The music is pumping and I'm in my element. But it's a peculiar race, this one: it snakes around housing estates and a harbour and into the final third I find myself floundering and the dreaded is happening once again: I'm being overtaken, again and again, and it's frustrating and I look at them and their muscly and sinewy legs and I envy their solid stride. Several men much older than me pass me and I think: What the hell? But age has little connection with fitness, really. It's a true state of mind.

Never mind. I will regain my quick stride. And then, on the home stretch, that headwind. Just as I should be giving it my all, it's a battle to stay upright at all. I curse and rage against the unseen beast and roar into the final leg, staring ahead at an unfixed point as if I'm transfixed and haven't a brain in my head, little stalks of white and pink and brown and hairy and splodgy and textile legs dancing around and threatening to collapse -- and then the grass-covered runway for touchdown and I ignite and boosters burn and the crowd screams out -- "Go, for it!" -- and I cross the line, and I am done.

Why do people with small houses give them names? Are these tiny piles deserving? What's wrong with a number? My house has a name, but then it's more than just a house. It's a farm. I'm walking, trotting, back to the flat, to cook lunch for my children, and I'm looking, and I'm thinking and I'm wondering. Kate Bush and her man are still at it, and so am I.