Over the past 2,000 years, the Virgin Mary's face has been imagined anew by every generation. We depict her beauty according to current standards of attractiveness, re-inventing her to reflect our own priorities. Her portrayal over the centuries was fluid: Mary's image absorbed the attributes of ancient goddesses; was an anathema to Islamic revelation in the seventh century; denounced during the iconoclasm of the ninth century and continuing; made more nurturing and familiar during the Middle Ages; royally bedecked during the Renaissance; relegated to the role of genial housewife by the Reformers; and shunned by the Enlightened, before she reemerged, officially recognized by Catholics as the Queen of Heaven, with the proclamation of the dogma of the Assumption in 1950.

Today, perhaps, judged by the media's polished criteria, the historical Mary, a peasant girl from dusty Palestine, might not have looked good. But she was good. For as often as her exterior features changed over time, what they had in common was an abiding attention to the singular truth of Mary's genuine, steadfast faith and uncompromising purity.

In that context, I can't help but think about other female faces that are famous at the moment, especially those who tend to dominate the headlines. These are attractive women, by current yardsticks, but what strikes me is how similar they look and sound. There's a smoothness to their faces, abetted by heavy make-up and good hair stylists, and by the camera's long-time love affair with angular features that soften only when committed to film. Too often, when I listen to these women, I hear God being stuffed into small, hateful boxes that have very little do with authentic faith. Their words -- shrill, one-note broadcasts that depend on the creation of fear -- say one thing, their looks another.

Oddly enough, the same could be said of certain portraits of the Virgin Mary. Some of the most memorable ones show her as Renaissance royalty, her image bejeweled, embroidered in gold, and seated on a throne. Bling? She inspired it. The "Queen of Queens," as Henry Adams described Mary in his 1904 paean to Chartres, had "richer and finer taste in color than the queens of fifty earthly kingdoms." Like today's talking heads, Mary glistens with holy righteousness in such portraits, appearing satisfied, smug even.

Of course, there are practical and theological reasons why Renaissance artists and their patrons pictured her this way. Mary's face is youthful, showing her at the age when she bore Jesus, in order to illustrate her perpetual virginity. She is often dressed in blue (artists used ultramarine blue, once the most costly of pigments, to honor her). As the vessel of the son of God, she is gilded and encrusted with jewels as befits a sacred tabernacle. Her throne celebrates her Assumption, when she was carried body and soul into heaven, her reward for a faithful life on earth.

When I consider Mary's life as it was actually lived, however, and the earthly reality of this olive-skinned, dark-eyed daughter of Israel who struggled to survive in a hardscrabble, politically oppressed society, a different image emerges. Her life was one of poverty and hardship, punctuated with spirit-extinguishing sorrow. Giving birth is a strenuous, messy job, even today in a hospital, much less 2,000 years ago in a cave intended for livestock after traveling for days on a donkey. Once her son was born, her maternal joy must have been tempered by the knowledge that hundreds of other mothers were grieving, their babies slaughtered because of her child. From temple elder Simeon she soon learned what she had probably already intuited: A sword will pierce your soul, too. And so it was. A few short years later, she stood by, helpless, as her son was sentenced to death, scourged to a bloody pulp, and nailed to a cross.

This other Marian history is hinted at by the image of Our Lady of Czestochowa, the fabled Black Madonna housed at the pilgrimage monastery of Jasna Góra in Poland. Like many icons, this one is also covered in heavy gold filigree and studded with precious stones. But the glitter cannot hide the palpable sadness -- or perhaps it is anger? -- in her eyes. Her intense, haunting gaze seems to look both backward and forward in time. Shot with an arrow, slashed with a knife, the icon's face is permanently scarred. Similarly, Our Lady of Guadalupe, today the most popular image of the Virgin Mary, has been adopted by gang members, addicts and others wounded by life who respond to her tenderness, enough to melt the hardest heart. The historical Mary, also scarred by life, is eternally beautiful because she allowed suffering to transform rather than disfigure her soul.

When she agreed to bear the son of God, Mary chose to rely on faith, not fear. Yet she enjoyed none of the pleasures that we have come to conflate, mistakenly, with God's presence. Too often the gratification of our senses and egos is taken as proof that God is on our side, as though a logical equation can be made between faith and what happens here on earth. For all of her regal and demure portrayals in art, and her near silence in the Gospels, Mary's is a loud and often difficult message: Faith is not rewarded in ways that can be expected or anticipated.

We know so little about the girl from Nazareth, yet her life suggests the depths of trust that are available to us, and tells us something too about divine love. Spared nothing, she turned repeatedly toward kindness, forgiveness and compassion. Quite simply, she said "yes," one woman's personal act of unconditional faith that changed history. Full of grace, beloved by God, as we are also beloved, Mary possessed an indelible goodness and wore it lightly.

Judith Dupré's new book, Full of Grace: Encountering Mary in Faith, Art and Life, will be published on Nov. 2.

The Many Faces of Mary (PHOTOS)
Visions of Mary 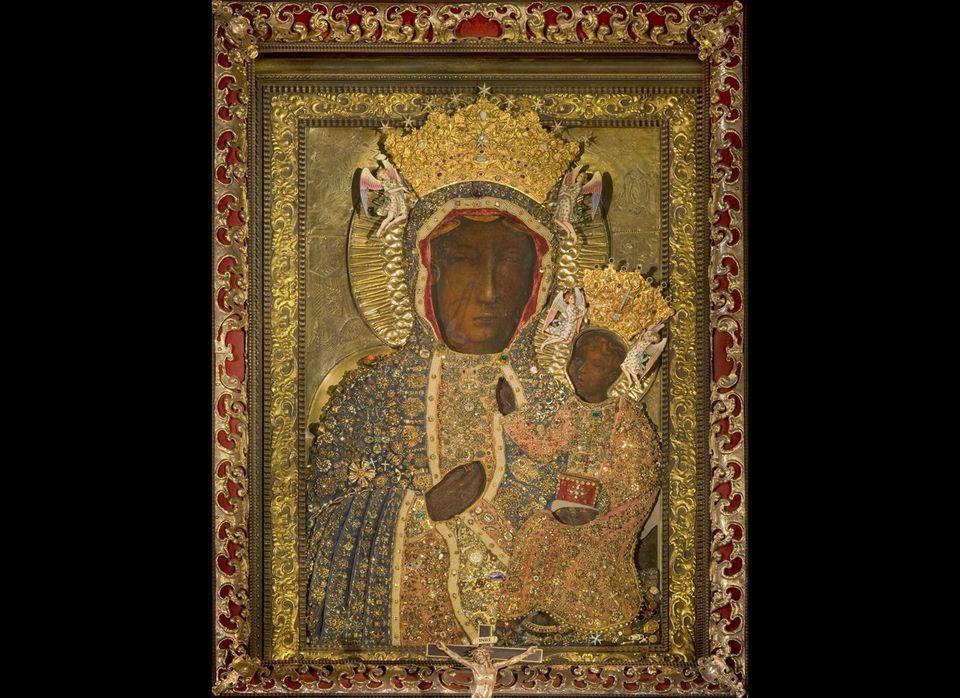 1 / 11
Mysterious and scarred, Our Lady of Czestochowa (c. 14th century) is one of the most revered black madonnas, a group of portraits of Mary with dark skin, whether by artistic intention or the accumulation of candle soot.
Achim Bednorz/ Bednorz-Images