On a sultry June afternoon, as my husband and I strolled towards the White House East Entrance, I reflected back to the time of my gender transition, in 1968.

Shamed as a social outcast, I'd lost my family, my friends and all social support. I'd been fired by IBM, and lost a promising computer research career. In many jurisdictions, I could have been arrested and charged as a sex offender -- or, worse yet, institutionalized and forced to undergo electroshock therapy in a mental hospital.

Evading those fates, I completed my transition and began building a career in a secret new identity, starting at the bottom of the ladder as a contract programmer. Even then, any 'outing' could have led to media exposure, and I'd have become unemployable, out on the streets for good. The resulting fear channeled my life into 'stealth-mode.' I covered my past for over 30 years, always looking over my shoulder, as if a foreign spy in my own country.

But this was June 13, 2013, and what a contrast it was. My husband Charlie and I, along with many other activists, advocates and allies, were about to join the President's White House Reception in celebration of LGBT Pride Month. The atmosphere was full of joy and hope for the future. As we waited for the President, I reflected further.

I had been 'out' for 15 years now, or so I'd thought: out on the Internet to inform colleagues about my past, out as an advocate for transgender people, out as an activist against the psychiatric-pathologization of gender variance.

It was one thing to hide in the back-rooms of Xerox Palo Alto Research Center decades ago, launching innovations as the hidden-hand behind the VLSI microelectronics revolution in Silicon Valley - a revolution that's changed the world forever. I didn't mind being almost invisible in my field back then or that no one had a clue what I was really doing, much less who was doing it. I was thrilled to even have a job.

But 'out' has many shades of grey -- and even in recent years I kept on partly covering, shyly holding back, lingering in the darker shadows. Although times had changed, I'd clung to old habits.

Down through the years no one could explain how the VLSI revolution actually happened. The results were simply taken for granted. Although I'd gained vital knowledge about generating such engineering paradigm shifts, I feared that my personal history would loom large in people's minds, and obscure any attempts at explanation. It wasn't till 2012 that I finally got up the nerve to publish a career memoir, to begin telling the story of how the revolution came about ...

As the president entered the room, I glanced around and took in the joyful vibes. As he began to speak, I grasped the reality of how far we'd come. Times had more than changed: a fresh wind was sweeping through our society, especially amongst the younger generations.

Then I thought of the millions of other LGBT people out there. I tried to envision the enormity of lifelong struggles against stigmatization and ostracism, of losses of families and employment, of their oppression by having to 'cover', often not fully engaging life nor being known for who they were, what they'd done, who they loved or who loved them.

And it hit me: we've come so far, so fast, that ever so many others could begin shedding old habits too. After all, freedom isn't just an external concept, framed by our laws. It's a gift of the spirit that we must give ourselves, in this case by going towards brighter shades of 'out'.

Bottom line: If you want to change the future, start living as if you're already there. 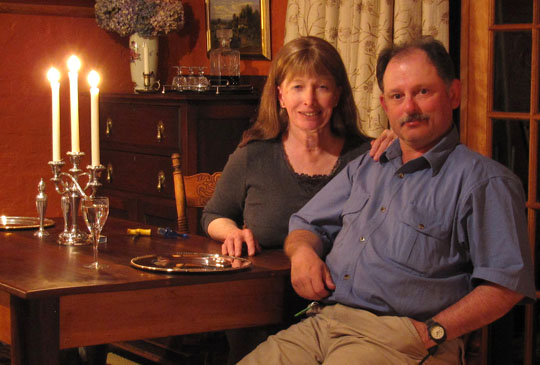