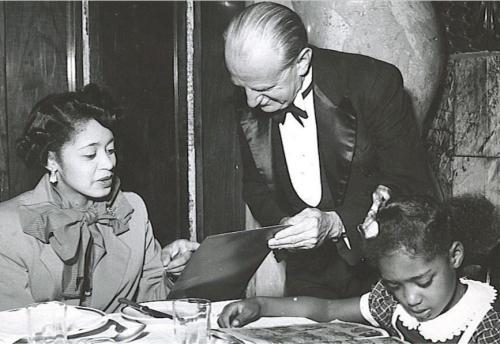 I was immediately intrigued by the somewhat clunky but memorable title
of the essay collection edited by Jennifer Jensen Wallach: Dethroning the Deceitful Pork Chop: Rethinking African American Foodways from Slavery to Obama. The phrasing comes from a quote by W.E.B. Du Bois, who wrote: "The deceitful pork chop must be dethroned in the South and yield a part of its sway to vegetables, fruits, and fish." Du Bois' statement points to the ambivalence that many African-Americans seem to have historically felt - and to some extent may still feel - towards their traditional food and the practices that surround it.

On one hand, it's the familiar fare of comfort, crucial for individual and communal experiences. This aspect is often celebrated, both in real life and in media representations, from films like Soul Food to innumerable commercial and community cookbooks. On the other hand, certain dishes and attitudes about food can be criticized, within the multi-layered and diverse African American communities in the US, as a set of habits too closely connected with slavery (as Du Bois and later, from a different standpoint, the Black Panthers did), or unhealthy, or as the uncomfortable result of poverty and ignorance, or not refined enough. Jensen Wallach's own essay in the book focuses on how Booker T. Washington micromanaged the diet of his students to teach them good manners and, also, had them consume beef, considered more nutritious and prestigious than pork.
The whole collection, as Psyche Williams-Forson observes in the foreword, "resist(s) a singular interpretation of Black food culture." Each essay looks at a different aspect, highlighting distinctions, contradictions, and evolutions in a varied set of culinary approaches that too often are labeled as just "Black," erasing the complex, painful, but also proud history of African American communities in the US.

The book includes reflections on the use of food in plantations, where slaves had to create spaces of autonomy and agency in a system designed to exploit and crush them. Kitchens and yards became spaces for power negotiations but also creativity and ingenuity. These tensions are reflected in the ongoing debates on what constitutes Soul Food as a different tradition from Southern Cooking, and on the nature and origin of Creole cuisine, discussions that two essays delve into, exploring the formation of hybrid identities and the heritage that comes with them.

One of the underlying themes of the collection is the role of women as actors in the cultural reproduction of African American cuisines, but also their embattled roles as food providers, sources of succor and nurturing, fearsome matriarchs, and supposedly eternally angry individuals. These apparently contradictory archetypes are profoundly intertwined with the structures of food production and consumption, racism, and the history material culture. One of the most interesting topics is the analysis of Michelle's Obama Let's Move! campaign and the frequently embittered commentaries it elicits.

The book ends with a look into more contemporary concerns regarding African Americans as food producers: from one point of view, the desire of many to remove themselves from their family history as sharecroppers and laborers, especially in the Jim Crow South; oppositely, the pride that others show in that same past, embracing it and turning into a tool to ensure food security and healthy nutrition for their communities through urban farming and other initiatives. Overall, the collection is a great contribution to our growing understanding, not only of African American foodways, but also of the social and political dynamics that have shaped, and still impact, the way we eat and think about our food in the US.