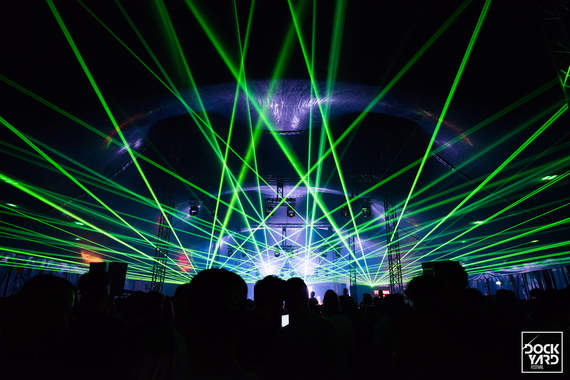 Dance music is a uniter. Whether it's the first ever pool party at ADE thrown by Sam Feldt, or exploring the techno tents of the Dockyard Festival at the NDSM Wharf, dance is a feeling, a movement, and a place where all are welcome.

This is only my second Amsterdam Dance Event. Last year, I had more of a kid in a candy store mentality, literally in awe that so many of the worlds greatest dj's, producers, artists, managers, agents, publicists, assistants, you name it, could be in one place at one time. But this year, when trying to prepare my schedule for the five day event (and about halfway through Wednesday), I realized that there are so many different experiences available, and in order to keep any amount of chill, you really have to just go with the flow.

I wanted to try and get a more comprehensive, 360 degree view of the event this time. This meant I had to miss some parties I really would have liked to see (Craig David (back at it again), Afterlife, Circoloco) in place of some that I would have not normally attended or stumbled upon.
By the time I arrived on Wednesday, ADE was in full swing outside of the Felix Meritis (one of the main hubs for the conference), with panels running during the day focused on topics such as marketing to millennials and using dance to create a better world. And pre-Wednesday parties, I had the great pleasure of being invited to the Traktor Cookery School, sponsored by Native Instruments for dinner.

From Wednesday through Friday, different members of the electronic community prepared dinner with the assistance of the Cookery staff. Wednesday was an Asian themed dinner (be still my heart) and was fantastic. Female powerhouses Nicole Moudaber and Skin prepared and served soup, fish with coconut rice, and green tea and banana ice cream. All served with a side of laughter and warmth. And of course there were drinks to be had, including their take on the Moscow Mule (aka Organic Love), which included vodka, and (according to Skin) more vodka. 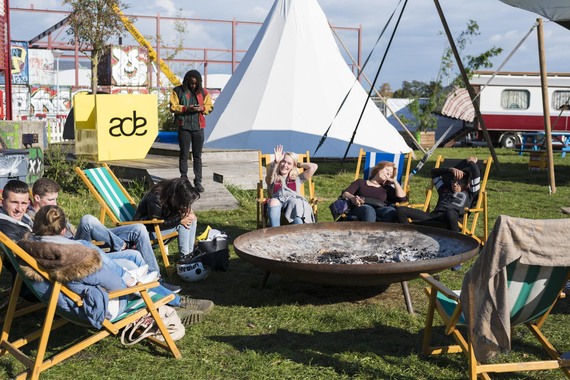 With some drinks in play and new friends made at dinner I headed off to the Throttle showcase. Throttle is a 19 year old musical mastermind who was making EDM cuts by 15 in Australia and has tasked himself with bringing back the funk, wrapped in electronic. The showcase on the top floor of an Amsterdam townhouse turned out to be not a DJ set, but a live concert. With a five piece band, a rotation of three great singers, and Throttle on guitar, the brief showcase featured Throttle's hit "Money Maker" and a preview of his upcoming single, a rework of "Hit the Road Jack."

Onwards to the Soulection party at the Canvas hotel. Befriended by two (stunning) Dutch females in the line, we waited together to get in (there were a massive amount of people at parties this year), and once inside, let's just say we added some fire to the dancefloor. The LA based Soulection is all about giving and creating positive energy and the location of their event not only felt like something you'd find in Downtown LA, but also hosted an open minded crowd. I found myself alternating between deep conversations and getting my life to Crystal Water's Homeless (Gypsy Woman). Man, that track is timeless. 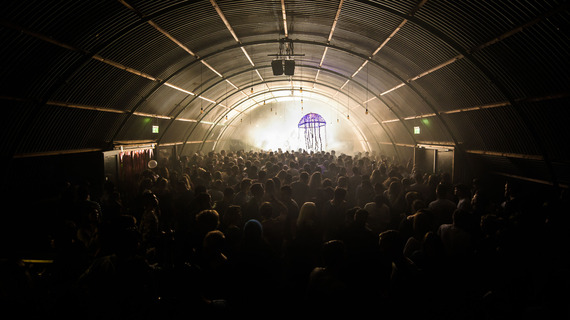 Thursday started with one of the panel highlights from this year. ADE Dance & Brands was held in the Hotel Arena, a relatively new multifunctional space. VICE presented a panel on the opportunities of storytelling in electronic music and also discussed their creatives services component, Virtue. In twenty minutes, Rens Verweij from VICE Netherlands gave a to the point, informative overview, including a great video parodying how all aftermovies look essentially the same.

Networking drinks by Ultra Music and Symphonic digital distribution ushered in Thursday nights stellar party lineup, though really the events everyday are not to be believed. I made it successfully to four of the six parties I had planned, but let's be honest, I could have spent the entire evening dancing at Marcel Dettmann's release party for his DJ-Kicks mix. The OT31 cultural centre's main space was transformed into an intimate venue, which included the walls of the bar area covered in prints of Dettmann, captured by Berghain photographer and doorman Sven Marquardt, adding a very personal touch to the evening. 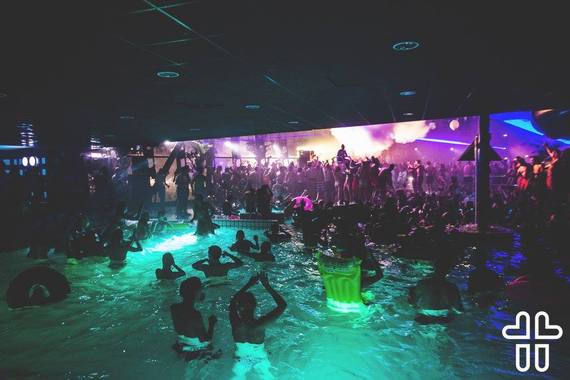 On the other side of town (and spectrum of electronic), Sam Feldt was throwing a pool party. The indoor pool center Sloterparkbad had been turned into a massive pool party with less than 25 percent of those attending not in swimwear. When I interviewed Sam Feldt about why he wanted throw a pool party, he said he wanted to create something that reflects his music, which has a tropical vibe. And this setting did just that, with mood lighting, a pool filled with beach balls and floating alligators, and palms trees adorning the dj booth. This created an atmosphere so strong that the music only enhanced the overall experience.

Out of swim trunks, the night ended watching the legend that is MK winding up and then dropping his remix of Bakermat's "Teach Me" at Chicago Social Club during the What Hannah Wants Party, and a thrilling rotation of sets (particularly Butch) at the All Gone Pete Tong event at AIR.
Friday conference began with a talk from producer/songwriter Anthony Preston on "The 10 Things I Wish Someone Would Have Told Me Before I got Started," in the Melkweg. A few highlights included, "deal for people not for where they are", and "art before chart." And now the weekend! 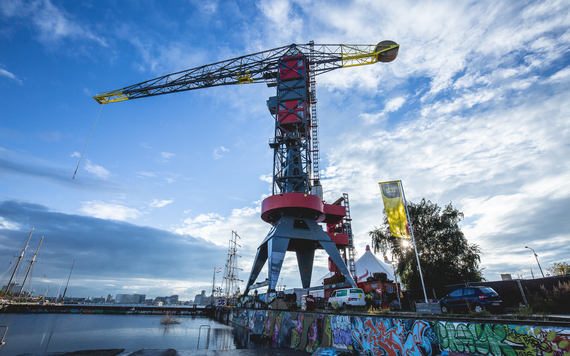 This year I found myself spending a lot of time in the NDSM Wharf area, starting with an event at the Crane Hotel to celebrate the launch of London based record label Housekeeping. The Crane Hotel is, quite literally, inside of a crane, and has a box shaped event space, which hosted the party (also presented by Mixmag), and a wraparound balcony that separates this area from the three hotel rooms above. Good music, good company, crazy unique location. This party was also live streamed by BE-AT.TV (one of their twelve events during ADE), and provided a more low key affair compared to what was taking place in the massive DGTL space nearby. 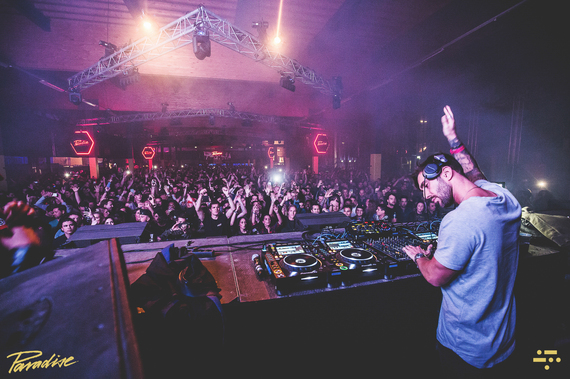 With the Ibiza season just coming to a close, a lot of the parties from the island of dance were represented in some form at ADE. Friday, the DGTL space belonged to Paradise and a strong tech house, deep house focused line up, which included Hot Since 82, Andrea Oliva, and Jamie Jones. DGTL is an interesting venue, but the sound never seems to clearly and fully infiltrate the space. However, you wouldn't have noticed as Patrick Topping and Richy Ahmed played back to back, all smiles and keeping the crowd rowdy in the second space.

While waiting to get into DGTL, we discovered a new venue, Spiegeltent, with a long entry way adorned with a teepee and open fire, reminiscent of the old Kater Holzig entry area in Berlin. Inside, the music alternated between middle eastern and funky house, but the vibe was strong and the chill out area made this venue a welcome discovery. 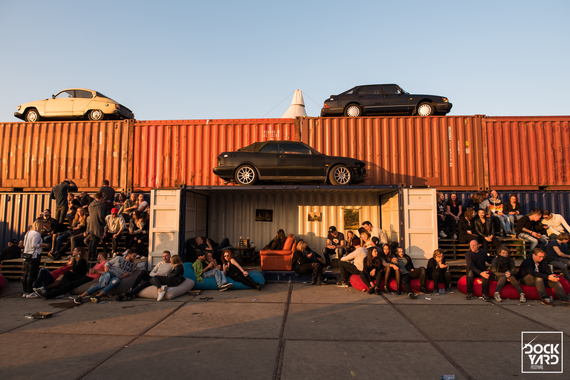 Saturday I found myself back across the water at NDSM. Taking the ferry ride over from Amsterdam Central gives a relaxing and calming view of Amsterdam. As the boat approached you could hear the bass pumping from inside of the various tents that made up Dockyard Festival. A well curated line up (including Dubfire b2b with Nicole Moudaber) made the music in every tent special as well as really interesting visuals. Not to mention chill out spaces made from old shipping containers, and semi-destroyed cars spread throughout. The visuals and set by Paul Ritch in the Mindshake booking tent was a particular stand out.

And from techno, to the festival within a festival at the AMF Arena to witness the spectacle that is an EDM focused rave. I mean, only David Guetta could get away with setting off fireworks inside of an arena while "Sexy Bitch" is blasting through the (incredible) sound system. I will admit, this is not my go to spectrum of dance, but aside from the music, the visuals were absolutely insane. From the lighting that re-created a tent over the entire standing room audience and then almost instantaneously recreated industrial scaffolding, the Arena showed the enormous possibilities that lighting has in creating visceral environments. David Guetta was followed by the "double Swedes" Axwell and Ingrosso, who played a quite dirty set, including a mashup, that leaned towards old school house. In the arena, technology was the real star. 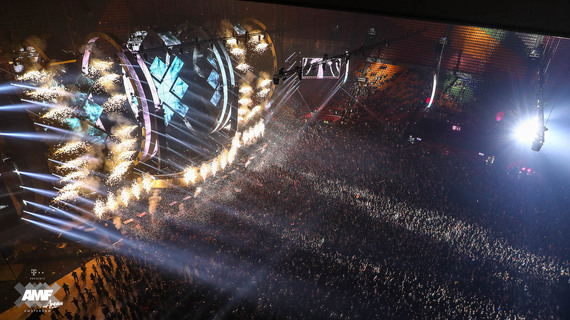 Sunday included a walk around Amsterdam, where the yellow ADE flags stood at almost every corner. With so much going on in the world right now, it's nice to take a minute smile, and have a dance together. As Richy Ahmed said in our interview "it's nice to be nice."

Much applause to the city of Amsterdam, ADE staff, volunteers, and everyone who helps make such a magical event exist.