As a person who helped build and launch rockets for NASA's Space programs, I naturally became curious about seeing the 20th Century Fox motion picture, The Martian directed by Ridley Scott, starring Matt Damon. As a rocket scientist, I am typically skeptical of science fiction movies dealing with space travel. After years of creating mathematical algorithms and volumes of rocket techniques as explained in my TEDx Talk, I typically am underwhelmed with many rocket movies and the science depicted in them. However, something amazing happened this time. After watching The Martian, I left ecstatic, wanting to return to my role supporting Mission Control. This well-crafted film intricately embedded thought-provoking science, real controversial decisions pertaining to space, and futuristic science applications humans have yet to develop. 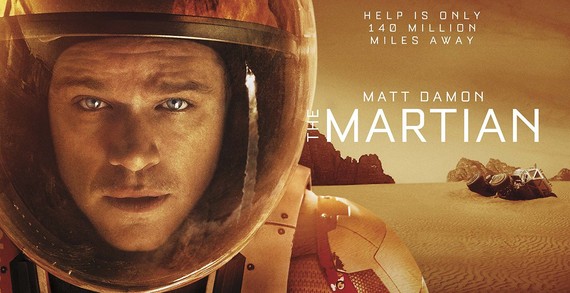 Written by Drew Goddard and Andy Weir, The Martian is a captivating movie about an astronaut, named Mark Watney, who is left on Mars after a severe dust storm nearly kills his entire crew on the planetary Ares 3 mission. As Mark Watney is stabbed by flying debris and is unable to return for the launch back to Earth, the crew assumes his death. Unbeknownst to the mourning crew, Mark Watney survives and is forced to embrace various survival methods using applications of math and science. The urgency for survival heightens as his space equipment malfunctions, and the lower-pressurized atmosphere seeks to destroy his existence. He considers defeat at first, until his desire to survive resurrects over his pain. And he finds a way to communicate with NASA experts and the world. As food and water supplies are set to exhaust far before the next scheduled mission four years away, the stranded astronaut counts the Mars "sol" days before his predicted death.

The producers and directors were clever in creating this science fiction film. Matt Damon gives an excellent performance and interjects humorous timing in the mist of pressing life-or-death technical problems. Excellent cinematography depicts a new planetary vision with three-dimension-like red-rocky images. Great special effects intricately show the rocket engines' exhaust plumes accurately. And the 1970s disco music brilliantly and subliminally associates the story with the real-life uninhibited U.S space technology development witnessed from 1969 through 1981. Phenomenal performances are given by the supporting cast portraying a female captain, international scientists and ethnically diverse spacecraft experts, all of whom mastered technical communication effortlessly. The casting directors, Carmen Cuba and Nina Gold, represented an ideal diversity within the Space Industry which has yet to be seen in real-life.

Three reasons launch this film above other space movies. 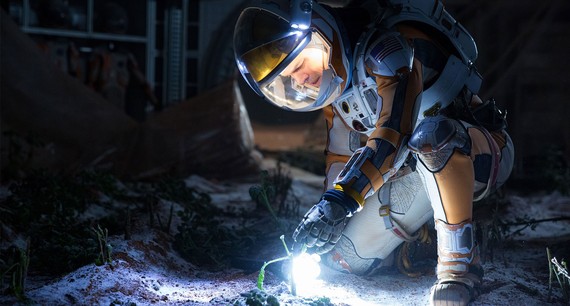 The movie accurately shows the environment within Mission Control. For nearly ten years, I was a scientist for NASA's advanced rocket propulsion programs. I used mathematics and science to calculate the probability of catastrophic explosions within flight, authorized Space Shuttle Main Engine hot-fire tests, and supported Mission Control by monitoring data for 12-hour time spans. In the movie, the large TV screens plastered in every angle accurately captured the darkness, timing and adrenaline involved in finding a solution within a 3-5 minute span before potential explosions were to cause deaths.

I also appreciated how the movie featured the heroes as scientists who calculated behind closed doors. Far more times than reported, technical things go horribly wrong, and these mathematicians and scientists are calculating for days resolving flight issues. I was one of these individuals. I remember running a mathematical analysis for 24 hours straight for a nozzle team who had been working for 72 hours straight before my assignment. It takes a skilled team to find real-time solutions.

Also in the movie, Matt Damon's character finds a way to make water from hydrogen and oxygen. The science within rockets can produce water. Many newer rocket designs have hydrogen as a coolant. The liquid element cools the interior engine walls which keeps the metal from melting in high launch temperatures. Typically hydrogen combines with an oxidizer, like liquid oxygen, to form a substantial, high-powered combustion. The retired NASA Space Shuttle used this combination to create steam. So hydrogen and oxygen would have been available for Matt Damon's character to use. However, hydrogen is extremely toxic and hazardous to the human body in its pressurized form. And the oxidizer can be explosive, and it would have to remain in its pressurized container. So, Matt Damon's character would not have been able to handle the elements easily or safely. In reality, an explosion would have occurred within the first few minutes of the experiment. Though, it was a great scene. 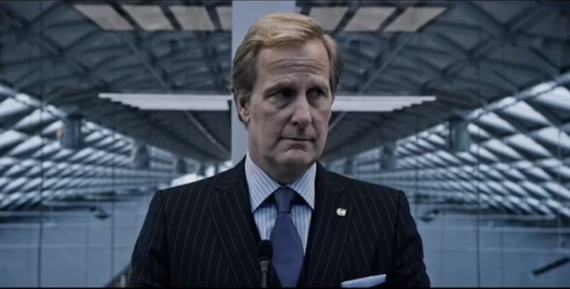 In The Martian, a fictitious scene served to brilliantly re-ignite a real concern echoed in the Space community about launch safety. Rocket launches are risky, and successful rocket science is about proper certifications being met. In the movie, the NASA director orders that the return flight's thrust and weight certifications be skipped in order to save time in returning to Mars. His decision led to excessive vibrations and bending moments within the launch, which exploded the rocket into pieces mid-air. This scenario is real. 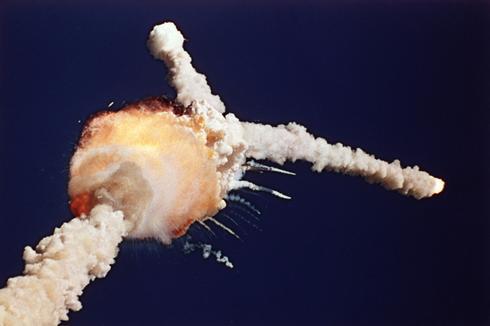 The NASA Challenger Explosion in 1986. Image courtesy of NASA.

The job of as a rocket scientist may appear glamorous, but it requires a safety mindset. As I authorized engine tests, I prayed that my signature would prevent fatal explosions. For, I was haunted by NASA's Challenger tragedy that I saw as a child. In 1986, the Space Shuttle was launched in freezing temperatures despite scientific warnings not to do so. A controversial leadership decision was made based on a tight flight schedule. As a result, millions of American school children saw, on TV, the gruesome death of innocent astronauts. I share the details in my previous Huffington Post blog article entitled , "Memories of Challenger Ignited by Antares Explosion." The movie drove home the point that science may be life-saving, but poor decision-making can ruin any success. The movie's dynamic plot played out this great controversy well.

3. Some futuristic science applications have yet to be developed. 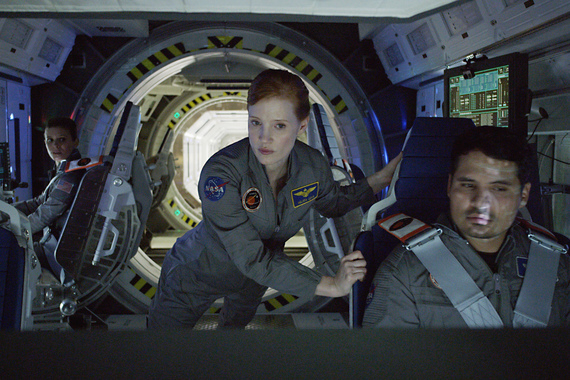 As a math professor, my students ask me if the movie's innovation is true. I must admit that there are a few scenes based on scientific imagination. There are two scenes that stand out. One scene is in the spaceship where there is zero gravity, and just a few inches away, a fitness center has full gravity. Although an innovative scene, this scenario does not exist in real life. Just to confirm, I called my astronaut friend to verify this fact. The zero gravity along with full gravity environments in space is not fully developed yet. But we are close to figuring it out.

This situation does not exist, because the gravitational manipulation on the human body is not fully mastered. Currently when astronauts venture into space for six months or more, their muscles atrophy due to the lack of gravity and resistance. For example, the human spine extends an average of 6 inches when in space. When astronauts return to Earth, they face long days of rehabilitation as they reorient themselves with "up," "down," "to the side," "behind" and "front." And they often have trouble walking for the first two days. If the astronauts were to move from weightlessness to full gravity movement as in the movie, their bodies would feel the shock. This gravitation force is very powerful on the human body, which was accurately depicted when Matt Damon's character fell unconscious when launching from Mars.

" You do the math. You solve a problem. Then you solve the next. Then you can come home."
- Matt Damon in The Martian. 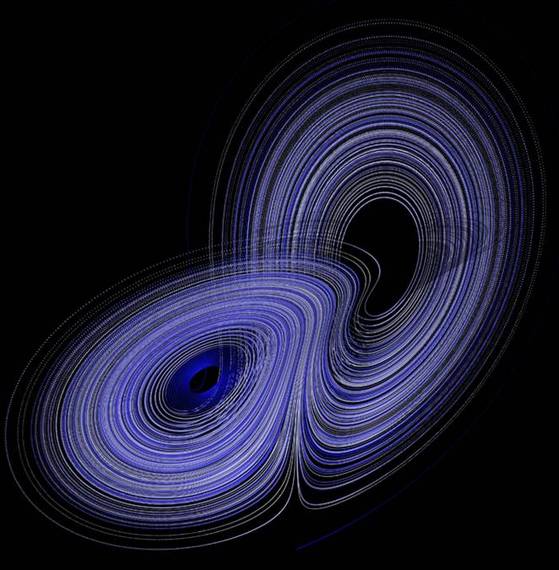 Mathematical Chaos Theory calculations, as seen in this image, leads to finding faster pathways in Space.

Also in the movie, there was a "gravitational assist" move planned with a manned spacecraft. The crew decided to apply a maneuver that would use Earth's gravitational properties to propel the spaceship faster back to Mars. This procedure is actually real, but it has not been performed with humans onboard. The process stems from Chaos Theory Mathematics. In the math calculations, there are two types of locations that lead to either stability or instability. If a object gravitates toward one of the stable points, it may stall in space. (In the movie, stability was landing on Earth). If the object moves to an unstable point, it propels the rocket into additional space pathways. This movement basically "throws" spaceships into distant locations using less fuel. This math is important in finding "the freeways" in space that move the spaceship faster, because the amount of fuel needed to visit distant planets cannot be carried by one rocket. Chaos Theory is used for more than space travel. It predicts new technology, new weather systems, and even explains how the human brain's neurons fire together in neuroplasticity. Though in travel, humans have never been on a spacecraft that has flown to Mars partly because the "gravitational assist" effects on the human body are not fully understood yet.

Again, The Martian is a great science fiction film that intricately embeds thought-provoking science, real controversial decision-making, and and futuristic science applications humans have yet to develop. It was a great movie. And I give The Martian film the "Olympia Yes Vote." I would watch it again.