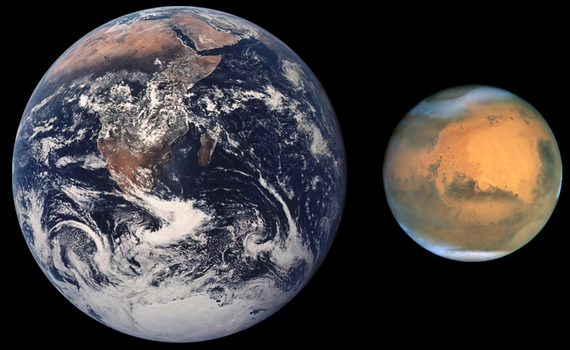 The Martian is my favorite space film since Kubrik's 2001: A Space Odyssey. While I'll go to my grave a Star Wars fan, I'm excited that The Martian did a pretty great job of representing science and engineering accurately and trusting the audience to be smart enough to enjoy that. Despite a few minor technical arguments, I give The Martian an "A" in engineering. Unfortunately, it earns a big fat "F" in econ.

Astronaut Mark Watney lives in an alternative economy where NASA has hundreds of billions of dollars to run a Mars program dwarfing Apollo. Those moon shots spent nearly 5 percent of the U.S. national budget when times were fat and entitlement programs hadn't gutted federal discretionary spending. Today's NASA must fight over budgetary scraps. Space exploration is lucky to get a bit less than half a percent. The chances of that fraction rising are equal to the chances of Medicare spending being constrained, which in scientific terms we can represent as 0 x 100 percent.

And, what does alternative America get for its massive investment in Mars exploration? Even the film's astronauts chide Watney with, "You've discovered dirt!" That really isn't funny; it's an indictment of a broken "science only" vision that hobbles our space efforts. We've known for years that most science can be achieved safely and cheaply by robots. No amount of in situ dirt analysis will justify sending humans to Mars over funding veterans' benefits.

The American taxpayer doesn't want to spend billions discovering dirt! She wants a bold human program featuring cool engineering and brave astronauts on a real mission accomplishing something! Most of all she wants to share the dream that she might someday leave her foot print in the dirt of another world. She grew up in a generation that accepts mankind will colonize the planets and wants to get on with that! NASA just doesn't quite get it.

The agency's reaction to Elon Musk's remark about terraforming Mars via nuclear icecap melting highlights it's science myopia. NASA responded that it was "committed to promoting exploration of the solar system in a way that protects explored environments as they exist in their natural state." Seriously? Preserve a bunch of dead rocks in a vacuum, forever? Declare the solar system a hands-off national park, where a select group of government approved astronauts will occasionally journey at immense cost to discover more dirt? Who shares that vision? Slightly more than 0 x 100 Americans.

Meanwhile, it's the commercial sector that has a vision and is building our future space infrastructure. Musk (SpaceX), Richard Branson (Virgin Galactic), Paul Allen (Stratolaunch) and others are leading us forward both spiritually and physically. To be fair, NASA's better nature has supported that endeavor with excellent programs for commercial cargo and crew. The agency also does amazing fundamental research in aeronautics and technology that benefit us all.

However, since NASA can't find a compelling space vision (e.g., helping the private sector to colonize Mars) and gather support around it, Congress gets to tell it what to do. Unfortunately, Congress wants it to spend the biggest part of our space budget on a huge governmental jobs program without a mission, the Space Launch System (SLS).

SLS literally gets us nowhere. We really don't know where this $18 billion thing is going to fly, we're just funding the damn thing! There has been talk about going to Mars, returning to the moon or visiting an asteroid - all to discover more dirt -- but no conclusion or enthusiasm. The vehicle itself promises little engineering innovation because its design mandate was to avoid originality and reuse existing technology in order to get things going "fast" and "cheap" (in governmental terms). With Space Shuttle engines and boosters topped by a traditional old-school capsule, SLS pushes no envelopes and fulfills neither of NASA's two primary mandates: scientific research and technology development.

While SLS could theoretically help carry Mark Watney to Mars, the sad reality is that it will just compete with the private sector providers already servicing the space station. SpaceX and United Launch Alliance are ready to provide manned launch services to orbit and beyond using capsules from SpaceX and from Boeing. Blue Origin and Sierra Nevada Corporation have serious systems under development as well. Bigelow Aerospace has an uber-cool inflatable space-hab ready for testing. These companies have a vision of regular human beings in space, generating tax dollars, not burning them.

Since, NASA isn't going to publicly embrace colonization, it should ditch SLS, fully back private sector launch services and focus on the amazing flight research and cool science that it does so well. A functional space economy will provide infrastructure, resources and taxes to fund dirt discovery beyond the agency's wildest dreams. Hopefully the next great space film will feature an entrepreneurial astronaut choosing to stay on Mars and launching a business.

Greg Autry teaches technology and social entrepreneurship at The Lloyd Greif Center for Entrepreneurial Studies in the Marshall School of Business at the University of Southern California. He authored a report for the FAA Offices of Commercial Space Transportation entitled An Analysis of the Competitive Advantage of the United States of America in Commercial Human Orbital Spaceflight Markets. You can find him on Facebook.